Development of human capital is the key goal of BRICS: the outcomes of BRICS Civil Forum 2020 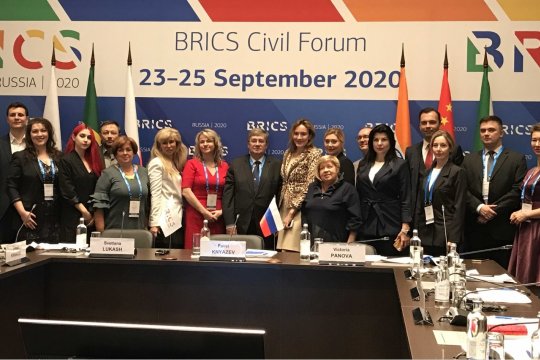 On September 23-25, the international multimedia press center of Russia hosted an online conference in Moscow, focusing on the results of the BRICS Civil Forum 2020.

Speakers listed the cases and measures pertaining to their implementation as part of previous groups, and announced the topics of their upcoming meetings.

Victoria Panova, co-chair of the BRICS Civil Forum and Managing Director of the National Committee on BRICS Research, said that a total of eight working groups were present at the forum, including dedicated groups on ecology, digital economy, culture, science and education. Panova pointed to the development of human capital as the primary goal of the forum.

“We all remember how, during a meeting by world leaders in Brazil, Vladimir Putin laid out measures aimed at boosting the living standards and quality of life of the peoples of the five BRICS countries as the main goal of this organization,” she emphasized.

Each year, the BRICS organization is becoming more independent and cohesive across the board, including through the use of digital technologies.

Victoria Panova also enumerated the main recommendations and measures based on the results of the work done by some groups. For example, recommendations made by the Healthcare group in 2015 on measures to handle a global pandemic have been supplemented. As part of the Education and Science group, the BRICS Network University and the BRICS University League have been created and now start working together. The group on ecology, which faces a host of paramount and urgent tasks, deserved a special mention.

Oleg Zhiganov, co-chairman of the BRICS Civil Forum’s Information Strategies and Society working group, said that they would concentrate on the issue of post-truth in the modern-day media of the BRICS countries.

“During this event, we agreed with our colleagues that we will speak the truth and nothing but the truth,” Zhiganov said, having in mind critical approach and fact-checking in a rapidly developing information society.

“The main thing that we are going to discuss is providing support for educational projects in universities and schools in order to instill a sense of critical thinking in young people and the ability to assess the objectivity of certain facts,” Zhiganov noted.

Natalia Tsaizer, co-chair of the BRICS Civil Forum’s Women and Girls working group, shared the results of her group’s meetings, highlighting the current issue of gender equality in the BRICS countries. She noted that her working group is out to eliminate gender imbalance and equalize men and women when it comes to career growth and their role in decision-making structures, including in the military.

“There are a huge number of areas in the economy, politics, and the social sphere, where women are underestimated in terms of their involvement in the processes, not only as observers, performers and 'beautifiers' of the working process, but as actors ready to make decisions, set goals and implement them,” Tsaizer said.

The issue of gender equality is extremely relevant not only in the BRICS countries, but elsewhere in the world. However, while it is imperative to provide equal opportunities for men and women to be involved in various organizations, Natalia Tsaizer still warned against sliding into what she described as "militant feminism." The participants in the working group’s meeting proposed involving women in the decision-making process in various areas, and setting up anti-crisis committees within BRICS where women would make up at least 50 percent of their membership.

“On the one hand, this is quotas, but on the other, this is something we just can’t do without because we need to regulate our presence that we could rely on,” Tsaizer argued. She also noted that right now the working group consists of women only, since men are not very actively involved in tackling such issues, even though achieving gender balance is high on the agenda of the Women and Girls group.

Stepan Kanakin, the coordinator of the BRICS Civil Forum, answered questions regarding the technical aspects of organizing the forum in conditions of a pandemic.