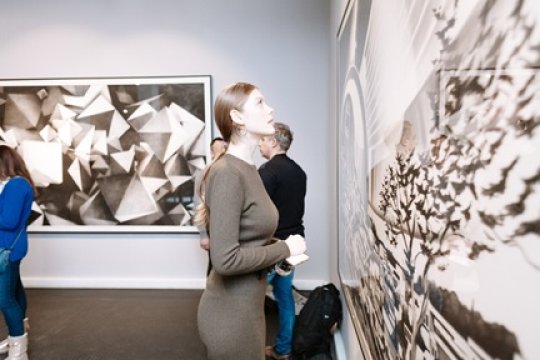 Muscovites have long got used that every December, the darkest month of the year, one of the city's central squares across from the Bolshoi Theatre, is brightly lit not only by a huge Christmas tree, but also by the Grand menorah traditionally installed for Hanukkah when Jews around the world celebrate the Festival of Lights and the miracle of the temple’s menorah burning brightly for eight full days. It has been over 25 years now, since it was first publically celebrated in Moscow in the 1990-s. As in the previous years Russia’s Chief Rabbi Berel Lazar headed the ceremony and lit the first two candles. Sergei Sobyanin, the Mayor of Moscow, sent the official greetings to the spiritual leaders of the Jewish community. Addressing the audience, Berel Lazar said that the ceremony is “a signal to all people and a reminder that even light of a small candle is able to deny power of darkness". The festival evening continued with fireworks and dancing to the traditional Jewish music. Later the Federation of Jewish Communities of Russia’s (FJCR) annual awards ceremony took place at the State Kremlin Palace. The “Fiddler on the Roof” award was established in 2002 and honours outstanding achievement of individual contribution in social and cultural life of the country regardless of nationality and religious belonging.

The Festival of lights is over, yet a cultural marathon «Shine Bright» geared to the celebrations ended only on 17, December. For almost two weeks the series of events supported by NATIV, a liaison organization to the Embassy of Israel in RF, and in partnership with various Russian cultural institutions, gave Russian public a chance to open the new names and bright figures of modern Israeli art scene. The list of events included a concert of classical music at the Tretyakov Gallery, lectures, art talks and workshops at different venues across the city, parties at Powerhouse Moscow as well as a group show of contemporary Israeli artists entitled «EXTENSION. Israel: Illuminations» at Triumph Gallery. It has become the 9th exhibition within the “EXTENSION” project that introduces Russian viewers to contemporary art of various countries. The current show incorporates works of 13 contemporary artists from Israel, who belong to different generations and work across media. Elena Rubinova, «International Life» observer met Dr.Roy Brand, lecturer of Philosophy at Bezalel Academy of Arts and Design and the curator of the show, and artist Ben Wadler to discuss the themes of cultural memory, representations of minorities within the art world and to find out what makes contemporary Israeli art internationally appealing. 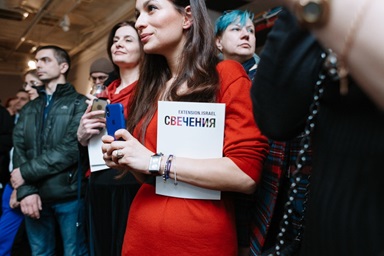 Public at the Opening

Why has video art become the greatest catalyst for the development of contemporary Israeli art?

Roy Brand: When contemporary art “broke” into Israel in the 80s and 90s, video became the prominent medium. As contemporary art developed everywhere in the world, it also developed in Israel, but the medium was mostly video. Back then young people studying in art schools aged 18 or 20 picked up on that – they had immediate accessibility to video and started to produce really interesting works and it gradually became the strong tradition; they are now the teachers of the new generation of artists. Some works by these artists, like Dor Guez’s Sabir or The Messenger by Daniel Kiczales, you can see at this show in Moscow. 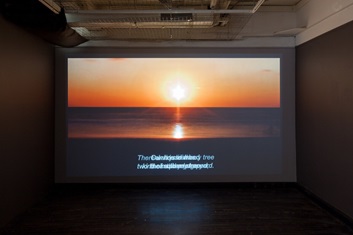 How did the concept of the current exhibition evolve?

Roy Brand: This exhibition developed from the previous show Dreams and Dramas
I did in Riga and year and a half ago – it was a big exhibition at three different venues. Dmitry Khankin and Emelyan Zakharov of Triumph gallery saw the show and "really" liked it. From that time on we had a conversation how we could make a show not exactly like this but with some elements of the one they saw. Moscow version is different but there are some participants that were in the Riga show too. This exhibition is a kind of show that involves many different senses. It’s enjoyable at many different levels – there is high formalism, minimalist art, but there is also something very passionate, colourful, musical and sensual about some of the works. And I usually go like that –  this is my interest to involve people on different levels – not only conceptual or only beautiful, but something that has to do with different senses. The idea behind the title of “Illuminations” is that we’re not living in a time of great light, there isn't a dominating vision that captures us, and we are somewhat lost, but there are many different lights that glitter and different voices that can be heard if we tune ourselves to their gentle frequencies; like candles they are weak, yet they can be very powerful. 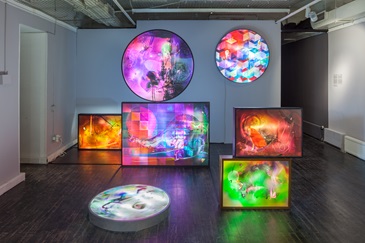 How did you choose artists for this project? Was your point as a curator to represent artists working across media or else?

Roy Brand: There is an emphasis on contemporary art, of course. Here you have the best of Israeli art of a few generations - some of them are my age, with some of them I collaborated before, some of the works speak to me more and I understand them better. The generation of artists who broke out around 90ies is most represented here, but the previous generation is also represented like Tsibi Geva. Some are emerging artists and much younger than me - like Karam Natour with his three circular digital images – astrological maps that blend together the artist’s personal mythology drawn from Arab, European and American cultures. He has just graduated from Bezalel School of Art where I also teach. So, most of participating artists I know either from art school or from other different walks of life. And one piece by Ben Wadler was produced specially for this exhibition -  part of his ongoing series of cast concrete sculptures. 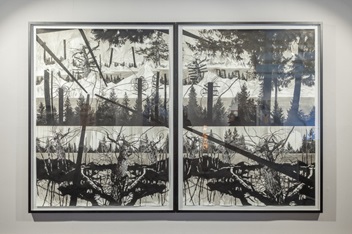 Yehudit Sasportas, The Mirror of Enigmas, (2008)

Ben, your piece became like a title piece of this exhibition with its flickering candles that eco the title of the show… What do you expect a Russian viewer to read your work?

Ben Wadler: You can read the sculpture in many different ways. Candle lighting does evoke a religious ritual – be it Jewish or Russian Orthodox - I visited many churches in Moscow, as I had time to stay longer than the rest of the team.  I saw that candle ceremonies are very common here too, and it is in my work, for sure. But my point as an artist is that you can put a candle out of worship to something you love and admire, but the same time a ritual can refer to something you detest. And that’s what the sculpture - the Hamsa hand with a middle finger means. Also candle lighting is a secular ritual for me as well – when I’m in the studio I have the habit of putting a candle or a stick of incense – to keep me company and have a feel of a living presence. You light a candle and don’t quite feel you are alone.

Before coming here though, I knew that the place was very rich in culture and my mother studied here, but I was close-minded about Russia based on the things that I’ve read in media many of which are true - but they do not present the whole picture of the people. My stay here reminded me that countries are complex and places are complex – they have many different sides, aspects and political connotations. And if you are an artist, you have to see for yourself and ask questions. 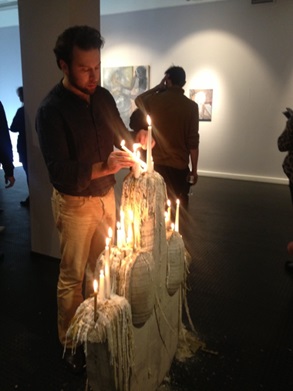 What can art do in the present? Must it adopt the strategies of politics or the media or, alternatively, insist on its layered and divergent voice?

Roy Brand: I think there are two levels to this issue. It’s really important to reserve the autonomy and the integrity of an artwork – artists are artists and they have their own language. They do not need to immediately translate it into political language. I mean to say I’m for it or I’m against, I’m right or left …They need to speak in a voice that’s different and show an image that expose an experience that is different from what media or political discussion is doing. But on the other hand, art can have an immense political effect: not by taking sides in a clichéd way, but by opening up opportunities and possibilities in imagining things otherwise and differently. It can create small pockets of energy and life that can resist the mainstream. This is not the triumphant and heroic art of high modernism brandishing utopian promises, but neither is it defeatism. Illuminations is a form of acting for a future we cannot yet imagine. 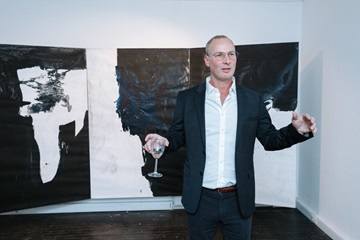 Roy Brand at the opening at Triumph Gallery

If you look at the work of many artists coming from Israel, their work can also be classified, among other definitions, as activism. Is this voice of artists heard in any way inside the country?

Ben Wadler: I would say that it’s mostly heard inside the country, which is not to say that anybody in power is listening…Culturally Israel is extremely fertile, there is a crazy high proportion of really strong artists per capita, but these voices do not get heard outside of the country too much because of contemporary political attitude towards Israel. And likewise, a lot of the best artists from around the world choose not to come to Israel right now to show and share their work. So, the boycott somewhat weakens the cultural discourse - what is heard and where. At the same time if we compare Israel to other countries, Israeli society, as a young nation, a country in its “youth” stage, listens less to the art and culture as a source of intellectual food. Even from my short time here I must admit that Russian society seems to be the point of contrast, the tradition of art here is very strong in the everyday. 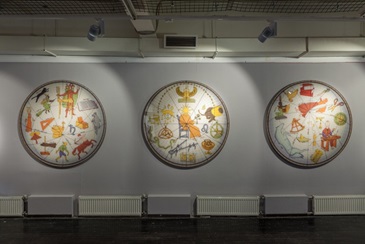 You have put up many international shows across the globe including Israeli pavilion at the Venice Biennale. What makes contemporary Israeli art international?

Roy Brand: Art in general, is a mirror of its time and culture. In this regard, Israel is a kind of an avant-garde country. Looking at Israel, you can see processes that that will emerge quite soon in other countries – you see them in a sharp, focused way in Israel. Chances are running high that what you see in Israel today will be mainstream in other places in a few years. 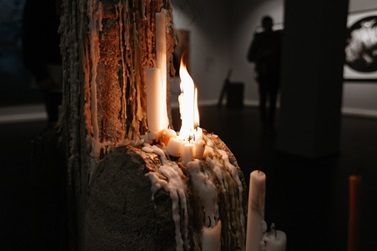 A fragment of the installation

What would you like the Russian audience to hear from this exhibition?

Roy Brand: First of all, to enjoy and be interested in art for art's sake. It needs to be good art first before it becomes an Israeli art or whatever. And then, there are levels of interest – you can be interested in the culture of the country, or politics or in the young generation of Israel and there are stories around each of those works and we provided information that is next to the labels and you can get this information. But it’s always important for me that there is also a universal level – it might be biographical about the work but there is something relevant to you. One can say: “I can understand this feeling or experience”, or “It’s opening up something in me, not just in the world”.

Images: by Elena Rubinova and courtesy of Triumph Gallery