Former Czech President about the tragedy of Yugoslavia 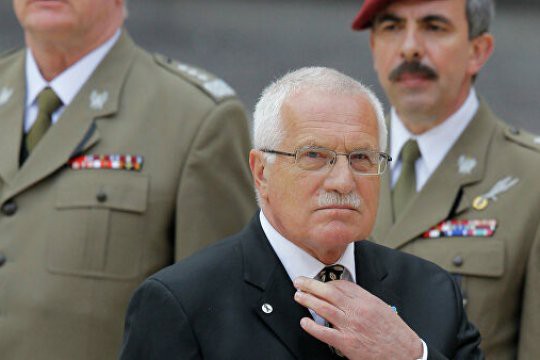 Vaclav Klaus, the Czech Republic second President and also the former Prime minister of this country (1992-1998), was born on June 19, 1941 in Prague occupied by Nazi Germany. Perhaps this fact of biography has made him particularly sensitive to the themes of occupation, war, and human rights. Having received an economic education, and already immersed in scientific work at the Czechoslovakia Academy of Sciences, he was forced to interrupt it when refused to join the Communist Party. The latter circumstance did not allow the Czech Republic future president to go to Yugoslavia, unlike many Czech tourists - admirers of the warm sea and the sun.

Klaus later admitted that before the Yugoslav crisis he considered Yugoslavia to be much more monolithic. "I knew, - Klaus wrote, - that during the Second World War the Croatian Ustashe behaved appallingly towards the Serbs, and that could not be forgotten by their descendants, but I had no personal experience and knowledge, and besides, as for me, as an economist, it was not close the Yugoslav model of self-government itself, which....our communists-reformers liked it so much."

In his book "We, Europe and the World", Klaus called the attempts of the United States and the Western Europe states to resolve hastily and thoughtlessly the issue of Slovenia and Croatia independence a critical moment that led to a sharp aggravation of the situation in Yugoslavia itself and the world.

In January 1992, Klaus was a member of the Government and attended its meeting being held, as usually, on Wednesdays. The then - Foreign Minister Jiri Dienstbier brought with him "a little, externally innocent material", and, violating the existing procedure, wanted to discuss it in an emergency at the meeting. The minister declared that everything was clear in the document and it did not need particular study. To Klaus surprise, that document dealt with such a "small" issue as the recognition for Slovenia and Croatia the status of independent, self-sufficient states. At the same time, all this was proposed to be done "without any preliminary discussion and agreement on the plan regarding the Yugoslavia partition, that was, without an arrangement within Yugoslavia itself."

In order to give weight to such ill-considered and hasty steps, it was announced to the government members that that plan was strenuously lobbied by the German Foreign Minister Genscher and Germany in general. To give Klaus his due, he opposed this decision and, together with some members of the government, voted against it, but they were in the minority. "I'm sure, - Klaus recalls, - that our decision has not played a defining role, but it has been...mistaken and has had bad consequences."

These lines author is sure that the rash and hasty partition of Yugoslavia has led to the tragic events of the war against Yugoslavia in March 1999. "My conclusion both then and now is unequivocal and uncompromising: I blame the international community and the main players for allowing this and thereby making possible the Balkan drama, which "in quiet version" continues to the present time."

Klaus admits that already then, in the early 90s, he could not watch without irritation the one-sided interpretation of the world's media and politicians of what was happening in Yugoslavia.

Klaus was also categorically against the so-called "humanitarian bombing" of Belgrade and the destruction of bridges in Novi-Sad. He does not mention in his memories the bombing of the Belgrade television center, the Chinese embassy, as well as the fact of using by NATO aircraft prohibited weapons, in particular cluster and uranium, which have caused irreparable damage to the civilian population and the ecology of this country. Klaus quotes a sarcastic statement from one of the well-known Serbian dissidents, opponents of Milosevic: "If we thought that by destroying the bridges over the Danube, we would eliminate Milosevic, we would do it ourselves."

In general, the second Czech Republic President has called the anti-Yugoslav action "one of the most hypocritical gestures of the Western, politically correct, pro-human rights world, namely its leading politicians." Klaus gives an even harsher assessment of NATO's aerial bombardments against a country without serious aviation and air defense. "I consider boastful statements that none of the attackers have been injured to be particularly cowardly way of waging war. The bombing of Libya is not much different from this."

As he could, Klaus resisted that the Czech Republic, under pressure from the European Union and Czech Foreign Minister Schwarzenberg, to recognize Kosovo as an independent state from Serbia. He testifies that there has not been any consultation with the Republic President on this issue, and it has not been voted in the Government. Being the President of the country at that moment, Klaus has made a statement that while he holds this post, he will not appoint any Czech ambassador to Kosovo and has kept his word.

And yet the most important consequence of the events in the Balkans, according to Klaus, has been that the NATO military operation against Yugoslavia has become "an overture to the wars in Iraq and Afghanistan that changed the world. It has become less stable, and although such operations have proved inefficient, their side effects, unfortunately, have been very significant."