“Gas context”: in the run-up to “Normandy Four” summit 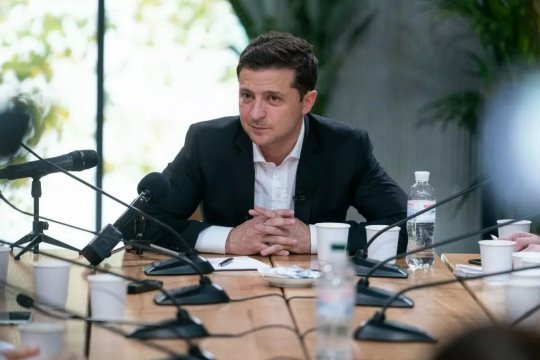 The participants in the forthcoming summit of the Normandy Four, which  includes Germany, Russia, Ukraine and France, have approved the text of a final resolution in the run-up to the event, which is scheduled for December 9th. Reports to this effect have become an official confirmation of the meeting and have been made at the officloa and unofficial levels by both Moscow and Kiev.

A statement to this effect was made by the Director of the Political Research Center Alexei Chesnakov, a source close to the assistant to the President of the Russian Federation Vladislav Surkov: “It was Moscow that demanded that this be done in advance, before the summit, so as to thwart Ukraine’s attempts to break the Minsk agreements during the negotiations ... Whether the text of the final resolution will it be publicized or will be closed to the public  will be decided directly in Paris ... In any case, all further steps will be specified by this document which Russia is completely satisfied with and which it will not let anyone reconsider."[1]

Alexei Chesnakov believes with a high degree of probability that his main task will be to determine the position of Ukraine, whether it will fulfill the Minsk agreements or not.

The parties tried to create a certain atmosphere for the long-awaited meeting:

• After announcing the December summit on November 15, Paris said that the participants in the summit would focus on “elaborating a new sequence of implementation of the Minsk agreements”.[2]

• Speaking at the Russia Calling! Forum Vladimir Putin said that the attempts to reconsider the Minsk agreements or change the special status of the Donbass republics are unacceptable. Concerns in connection with this were expressed by the Russian Foreign Minister in October: “... the feeling is that the Ukrainian side expects the Normandy summit to reconsider the agreements reached at the previous meetings of the leaders of Russia, Ukraine, Germany and France. This will become a blow to the "Normandy Four" reputation, and we will do everything to prevent this."[3]

• The position of Ukraine was presented by Foreign Minister Vadim Pristayko: “We are going to the Normandy Four summit with open ideas and an open mind, and we are ready to accept a reasonable compromise and bring home progress in the talks that Ukrainians have long been yearning for.” [4]

The fact that Ukraine has approved of the draft speaks of its readiness to strike a deal, what remains to be seen is what Kiev means by this.

As the law on the special status of Donbass, which is part of the Minsk Agreements, is set to terminate soon, Kiev is supposed to prolong it at least. This is what Vladimir Zelensky, who has a majority in the Ukrainian parliament, is in the position to do along with keeping intact all the provisions of the law valid under the Minsk agreements. Since Kiev has long been looking for   bargaining opportunites on this issue, a nationalist rally which has been announced to take place on December 8 in front of the Office of the President of Ukraine with a view to "ward off any back off solutions at the Normandy summit" plays into the hands of Zelensky, as political arguments.

Kiev has already made it clear what this bargaining may all be about - this is the probability of Ukraine pulling out of the Minsk agreements. The possibility of withdrawing from the Minsk agreements, "if this process continues indefinitely,"  was suggested by Foreign Minister Vadim Pristayko in one of his interviews: "This could sound a fairly unwelcome statement for our Western partners. But for us, Minsk is not the ultimate goal. The ultimate pupose is our survival as a nation. And if we find that all these principles do not work and only delay this endless process, then sooner or later, we will take a decision to exit the Minsk process. ”[5]

Assessing the consequences of such a decision, Pristayko emphasized that he is aware of the possibility of lifting sanctions against the Russian Federation: “We may follow the Minsk agreements until the end of our lives and our grandchildren’s lives, while sanctions can be lifted every six months. This no-easy balancing between how to understand and feel the moods, and whether the sanctions can still play the role of a deterrent or we need to leave the Minsk and seek peace in some other way - this is the responsibility of the head of state and the current government, and the entire society, by the way. ”

Ahead of the December summit, Kiev has brought the relations with Russia to such a state that the issue of the Minsk Agreements no longer appears to be the only one. As history shows, the cycle of political processes in Ukraine is quite short and each stage has a particular political content. From Maidan to Maidan, from elections to elections, from gas agreements to gas agreements and from IMF loans to IMF loans. This political karma binds Kiev in political maneuver, tying many parallel processes into a tight knot. Given the situation, Ukrainian experts predict two parallel outcomes of the summit for Ukraine: the first - Zelensky will arrive with a gas contract, the second - the transit of Russian gas will be suspended as of January 1, 2020.[6]

The first option is beneficial for all parties - Russia, Europe and Ukraine, except for a part of the Ukrainian political elite and Kiev’s overseas patrons. The second option creates reputational problems for Ukraine in front of Europe, and some socio-economic problems (possibly, despite statements about a sufficient amount of gas in storage, its shortages in the heating season). And in this case, even in the absence of a transit agreement with Ukraine, Europe and Russia may agree on gas supplies through Ukraine on a temporary basis, which, of course, will not suit either side, but will put Kiev in a difficult situation. At present, both options remain possible.

The interest of Europe, in particular Germany and France, is obvious – they are interested in ensuring gas transit through Ukraine, so there can be no illusions - Berlin and Paris will be on the side of Ukraine, because this is seen as a deterrent of Russia and they have invested a lot of resources into it. But the above positions are far from enough to describe the situation and the interests of the parties concerned. Ukraine is both supported by leading European countries and is under their pressure over the Minsk process, and besides, all this is now also affected by gas supply issues. During the Big Game program, German political analyst Alexander Rahr described the political background of the discussions of this issue in Germany: on the one hand, Berlin is interested in Russian gas, and on the other, politicians, including heads of territories, demand that the chancellor lift the sanctions.

Another factor is that the United States is tangibly behind all the processes in Europe and Ukraine. It’s no secret that Washington has been putting pressure on Europe, threatening with sanctions and seeking to push Russian gas out from the European market, replacing it with LNG from the United States. For Ukraine, which due to the political inertia of the past, accepts the idea of American LNG, this project is fraught with no-easy logistics (through a terminal in Poland, since Ukraine does not have its own terminal with LNG regasification capacities) and a high price to pay for this gas. Are politics going to beat realism and pragmatism yet again?! They could.

In my opinion, the signs are that the “Normandy Summit” will not be about the Donbass alone. It  will be a summit on gas for Europe and its transit through Ukraine. I think Russia is ready to go for it but only on condition it respects its interests which it has already voiced and the interests of the republics of Donbass in the context of the Minsk agreements.