«Polish Operation» by NKVD: the myths and the truth 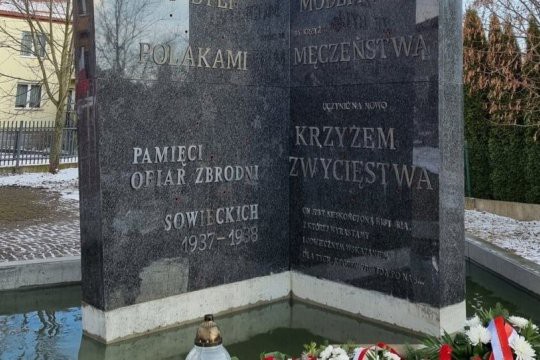 The so-called «Polish Operation» by NKVD of 1937-1938 is one of the constituent elements of the anti-Russian sentiment within the Polish society. In December 2022, the first memorial to the victims of the Operation was unveiled in Poland (1). Polish historians argue: the purpose of the Soviet authorities was a complete physical extermination of Polish nationals on the territory of the USSR.

Such a wording is inflated and ungrounded. Warsaw estimates the number of victims at 111,000, while living in the USSR at that moment were about 1.2 million Poles (mainly in rural areas of Ukraine and Belarus). Even if we are to believe the figure of 111,000, in order to describe the “Polish Operation” as an attempt to completely exterminate Soviet Poles, one must possess a rich imagination. The Polish experts cite some questionable research by Hannah Arendt (1906-1975), which serves as yest another glaring proof of the inflated nature of the accusations against the USSR of eradicating specific national groups. When it is necessary to put Stalin and Hitler on an equal footing, the western propaganda turns to Arendt, which makes it possible to draw a conclusion about the “scientific value” of her work, or, in fact, about the absence of such (2).

Polish researchers admit that the attempts by the Bolsheviks to Sovieticize Poles living in the USSR led to the appearance of the local version of Bolshevism, which was not necessarily anti-Soviet, but was clearly anti-Russian. The merger of  Ukrainian and Belorussian Poles’ thinking patterns with the Soviet political reality did not produce the result desired by the Soviet government.

In the 1930s marked Polish special services made noticeable progress to this end. The Polish People’s Army established Division Two of the General Staff (Oddział II Sztabu Generalnego Wojska Polskiego) for work in the Soviet direction. The Division was responsible for (attention!) offensive intelligence (wywiad ofensywny) on the territories of Russia, Ukraine, Belorus, the Baltic countries. Division Two cells (so-called ekspozituras) secretly operated in Vilnius, Moscow, Leningrad, Kyiv, Kharkiv, Tbilisi. There are reports in the Polish press acknowledging  that Division Two agents performed subversive acts and other acts of violence in USSR border regions, disguised as smugglers or criminals.

They carried out a large-scale campaign to recruit Soviet Poles via consulates and Polish Embassy. Agents in the rear areas of the USSR, up to Siberia, reported to Division Three of the General Staff (Komendа Naczelnа III). This division took its origin from Division Three of the General Staff of the Polish Army Organization of dictator Jozef Pilsudski (POW). Former members of POW on the territory of USSR were top candidates for recruitment, as they were mostly participants in the Soviet-Polish war of 1920.

They were provided with free land plots in Western Ukraine and Western Belorus in order to carry out the Polonization of these territories. The Pilsudskians were allowed to wear military uniforms, they carried out public intimidation campaigns, so that Belarusians and Ukrainians would know their bosses. Polish historians admit this too. The Pilsudskians were the driving force of the so-called revindication – a mass capture of Orthodox churches with a view to transfer them to the Polish Catholic Church or to destroy them. It’s no secret that the revindication campaign was accompanied by acts of vandalism against Orthodox shrines and violence against the believers.

Most Polish historians claim in chorus that the POW was not a fascist organization, as Soviet propaganda described it. But they tend to forget that Polish special services established partnership contacts with counterparts from Nazi Germany, fascist Italy, Francoist Spain and militarist Japan. We can read about cooperation between Warsaw and Tokyo during the bloody rampage of Japanese military in China and Korea in books by Polish authors (5). But if Warsaw, while building partnership with Axis countries’ special services looked on POW members as voluntary assistants, then POW was at least ideologically friendly to fascist organizations, so the Soviet propaganda was not that far from the truth.

As it happens, the situation involving Poles in USSR is far from what contemporary Polish authors portray as a bucolic picture where innocent Polish villagers growing bread and children suddenly fall victim to the unexplainably bloodthirsty Soviet intelligence. Such writers present conflicting views, when they say, on the one hand, about the inflated accusations against Soviet Poles, and on the other, described the 1920s-1930s as a period of impressive successes of Polish intelligence against the Soviets.

Alexander Zdanovich’s monograph “The Polish Cross of Soviet Counter-Intelligence. Polish Track in the Work of VchK-NKVD 1918-1938” tells us about the scope of the penetration of Polish agents into the Soviet organs of government and the recruitment of Soviet officials, military personnel, and public servants. And the efficiency of Soviet counter-intelligence is acknowledged by Polish sources which cite Polish spies talking about the challenges they faced in the USSR.

Here is the opinion of US Ambassador to the Soviet Union Josef Edward Davis, quoted by Michael Sayers and Albert Kahn in their book “The Secret War against Soviet Russia” (Sayers M., Kahn A.E. The Great Conspiracy. The Secret War against Soviet Russia. — Boston: Brown & Co, 1946): «Today we know that thanks to FBI efforts, Hitler’s agents operated everywhere, even in the United States and South America. The German arrival in Prague was accompanied by active support from Henlein’s organizations. The same occurred in Norway (Quisling), Slovakia (Tiso), Belgium (Degrelle) … However, we can see nothing of the sort in Russia. «Where are the Russian henchmen to Hitler?» – they often ask me. «Executed», – I reply. Only now do you understand how far ahead the Soviet government acted in the years of cleansing» (6).

Let’s not deny instances of arrests of ordinary Poles, who became hostages to the complicated geopolitical situation of 1930s. But there is no denying that Warsaw did its utmost to create such a situation off the Soviet borders.

Hence, a whole myriad of uncomfortable questions to Polish historical science: why did Poland, if it argues that it had to defend itself against the USSR, characterize its intelligence work as offensive (wywiad ofensywny), rather than defensive (wywiad defensywny), when Division Two of the General Staff was known as defensive (defensywa)?

Why did Poland’s intelligence demonstrate such indifference to Soviet Poles and continue to recruit them if it knew that this was fraught with death? If they argue that Polish intelligence fought against Soviet totalitarianism, why did Poland maintain allied relations with the special services of the most repulsive totalitarian regimes of the 20th century?

Why do they omit uncomfortable historical facts (for example, those mentioned in A.Zdanovich’s book) in their research on NKVD’s “Polish Operation”? Why don’t Polish historians “remember” about similar operations, carried out by the special services of other countries, such as the United States, against Americans of Japanese descent?

Warsaw is making frantic attempts to ideologically mix “the Polish Operation” and the myth about the artificial nature of the famine in Ukraine in 1933. In both cases, they accuse Moscow of genocide, ostensibly rejecting the possibility of a scientifically verified approach to the study of the events in question. This kind of propaganda is aimed at the Russian-speaking user as well (https://operacja-polska.pl/nkr), and is sometimes carried out on the territory of Russia (https://nkvd.tomsk.ru/researches/Siberian-Polish/Polska_operacja_NKWD/).