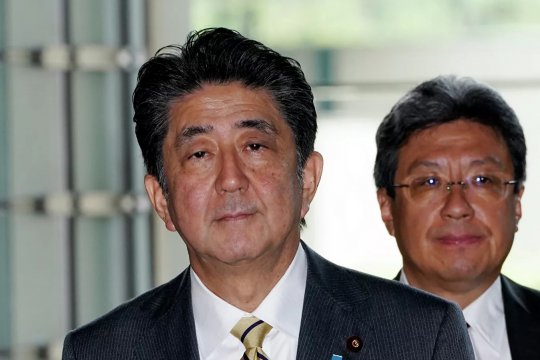 The decision by Japanese Prime Minister Shinzo Abe to hold a national referendum on amendments to the Constitution has evoked a number of logical questions. Why does he take such a decision now? "I have one year and three months to serve as Chairman of the Liberal Democratic Party, so I would like to hold a referendum within this period", - Abe said. In his opinion, since the Japanese Constitution, which was compiled 70 years ago, does not meet present-day requirements, it has to be changed.[1]

Under consideration is Article 9, which proclaims Japan’s refusal to possess military potential or use force in international disputes (2). The Article consists of two parts. The first one stipulates that «the people of Japan forever reject war as a method to guarantee state sovereignty and forever renounce threats of force or using force for settling international disputes». The second paragraph says that Japan will never ever create land-based, marine, or air forces, or any other kinds of military potential.

In January 2018 Abe told parliament that he would not change anything in the two parts of Article 9 but will add a third paragraph stipulating that Japan has legitimate right to possess self-defense forces (which means that the constitutional ban on the use of military force in foreign policy will remain intact).

And still, why now? The arguments in favor of such a move are the following. On the one hand, the Abe Cabinet enjoys a favorable political situation – the Liberal Democratic Party (LDP) has received a majority in the lower house of parliament. In order to make amendments to the Constitution it’s necessary to hold a nationwide referendum with the support of two thirds of deputies of both chambers. That’s why the risk is worth taking.

On the other hand, since the present Constitution was written for Japan by the American occupational command in 1947, the document is still seen by many Japanese as a symbol of foreign control. “Liberation” from the Big Brother, which is enshrined in Article 9 of the Constitution, has been on the agenda of the LDP since the day it was founded, so now, in the opinion of Shinzo Abe and his associates, the time has come to address this historical issue. Last year the Japanese prime minister swore on his father’s grave that he would initiate parliamentary discussions of amendments to the Constitution.

Meanwhile, a considerable part of population of Japan is against amendments to Article 9, fearing that the country’s potential participation in international conflicts will make Japan a target for its adversaries.

The referendum in question will radically change Japan’s relations with its partners, first of all, with its closest ally, which has become unpredictable. In July last year Donald Trump instructed his administration to threaten Japan with a withdrawal of all American bases from the island if Tokyo failed to allocate eight billion dollars annually for these military facilities (which is four times more than now). Information to this effect is contained in John Bolton’s much-talked-about memoirs.[2]

Undoubtedly, the issue of a referendum will trigger the predictable reaction of Japan’s neighbors, first of all, China and two Koreas, which bear the historical memory of the role of Japan in the Second World War. For this reason, the demands that Japan extend apologies will continue while speculation about Japanese militarism and the possibility of aggression will receive new justification.

But what is important is that the proposed changes to the Constitution will change little in practice. At present, despite the existing constitutional ban on creating land-based, marine and air forces, Japan does have land-based, marine and air self-defense forces. The country holds eighth position in the world on the volume of military expenses, while its military budget is all but a bit less than have nuclear powers Britain and France.

As for Russian-Japanese relations, theoretically, the constitutional referendum may do them a lot of good: if Japan’s foreign and defense policy becomes more independent and balanced, Russian-Japanese strategic dialogue may acquire a more progressive smooth-moving quality.

[2] «Basic count. Did Trump threaten to withdraw US military facilities from Japan», https://rg.ru/2020/06/22/ugrozhal-li-tramp-vyvesti-voennye-obekty-ssha-iz-iaponii.html