Japan and Australia: what the Reciprocal Access Agreement is all about 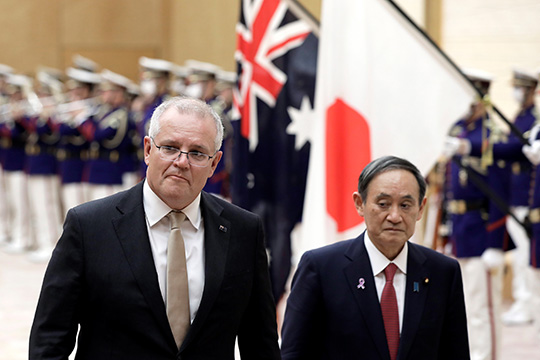 During his brief visit to Japan in mid-November, Australian Prime Minister Scott Morrison and his Japanese counterpart Yoshihide Suga announced a plan to strengthen defense cooperation between their two countries.

In keeping with the Reciprocal Access Agreement (RAA), Australia and Japan will provide their territories for joint measures of a defense nature and operations to eliminate the consequences of natural calamities and humanitarian disasters. It does not envisage any permanent troop deployments, like in the case of US military bases in Japan, however, and will only apply to joint or multilateral exercises, including naval ones. [1] Earlier, in 2017, the two countries inked an agreement on logistical support, and their military-political dialogue has been ongoing since the adoption in 2007 of the joint Declaration on Security Cooperation.

The RAA is scheduled to be signed in Australia, but it will still require parliamentary approval in Japan.

Once the agreement is implemented, Japan will for the second time ever authorize the presence of foreign military personnel on its soil. However, while the presence of US troops is an unpleasant reminder of Japan’s defeat in WW2, the new accord is seen as a major diplomatic success for Tokyo. The Japanese-Australian tandem is already beginning to look like a "semi-alliance." However Americans are not the only foreign military personnel that have set foot in Japan. In 2018, 50 British troops joined their Japanese counterparts in a drill held in three Japanese prefectures practicing rescue and reconnaissance operations as well as parachuting from helicopters, but strictly without the use of firearms. [2] Holding such joint exercises on a regular basis requires a pertinent agreement on the application of criminal, tax, and other types of legislation to foreign military personnel as well as customs clearance of weapons and military equipment.

Unlike the 1960 agreement with the United States, the one that Tokyo is going to sign with Canberra will be between equal partners. It also differs from the 1960 accord in that Tokyo made sure that Australian servicemen who happen to commit crimes on Japanese territory will be punished in keeping with Japanese laws. The situation is greatly complicated by the existence in Japan of the death penalty (in Australia it was abolished in 1985). However, even in the case of less serious crimes, conditions of detention in Japanese prisons are no match for what they have in the West. For example, the former Nissan CEO, Carlos Ghosn, was sleeping in a Tokyo prison on a straw mattress. [3]

Although the Reciprocal Access Agreement will also contribute to Australia’s growing role in regional security issues, Japan’s participation in it will be perceived as another big step towards changing the region’s fragile status quo. According to experts, this ushers in a new period in Japan’s foreign policy, demonstrating to the "middle powers" its readiness to cooperate on security issues. Tokyo apparently believes that while becoming a serious addition to the Japanese-US alliance, the agreement may simultaneously serve as an alternative for it to lean on if it has reasons to doubt Washington’s security guarantees. Donald Trump's departure from the White House does not mean that the ideas of neo-isolationism and neo-mercantilism are all gone now. It is with this understanding in mind that Japan is now building a new institutional framework for relations with the "middle powers" as it promotes its own concept of a "Free and Open Indo-Pacific."

Even though such trends in Japan’s security policy are now being associated by many with Yoshihide Suga, this is essentially the result of the hard and persistent work done by his predecessor, Shinzo Abe. For example, the whole idea to begin negotiations with Australia on the RAA was pitched back in 2014. The Japanese government has been doing a pretty hard job of settling issues that are of great concern to Japanese politicians and their voters alike. These are not only about the numerous scandals with US Marines. The Japanese have traditionally been against allowing "outsiders" to enter their country.

The news about the preparatory work on the agreement now over, came already in June 2020, and there were already good reasons for not only to announce this, but also to sign the document. [4] For example, this could have been done during the October 6 meeting by the foreign ministers of the United States, Japan, Australia, and India, (the so-called "Security QUAD"). The question is why didn’t this happen earlier, and why not just wait for the document to be signed? And although there may be several reasons for this, the main one was the Japanese and Australian Prime Ministers’ intention to wait for the outcome of the US presidential elections. Suga and Morrison are thus sending a signal to the new US administration that they have something to please their common ally in the event of a return to “pre-Trump” relations.

So the agreement has not been signed yet, and here we should recall the events of 2014-2015, namely the planned supply of Japanese-made Soryu-class submarines to the Royal Australian Navy. Despite a preliminary agreement between the then Prime Ministers Shinzo Abe and Tony Abbott on the purchase of submarines without a tender, the Australian government took flak from the opposition for the uncontested choice of the Japanese proposal and was eventually forced to announce a tender, where the Japanese lost out to the French. Today, the Australian government may likewise be criticized for being overly compliant with Tokyo about the prospect of Australian military personnel to be tried in Japan. There is still no clarity here, and the sides are reportedly prepared to hold more consultations on this particular issue. [5]

For Canberra, the process of the accord’s ratification by the Japanese parliament may become a source of unpleasant surprises. Although there is a high degree of probability that the document will be ratified, the officials’ failure to provide convincing answers to lawmakers’ questions could make important provisions of the agreement wide open to all sorts of  interpretation by politicians. Fully aware of this possibility, the government has made every effort to prevent this happening. Meanwhile, significant delays in the consultations between Tokyo and Canberra on agreeing the final text of the document were already construed as signs of fundamental disagreements between the parties on other issues as well. However, the delay was due to Tokyo's desire to work out the future agreement as carefully as possible for the sake of its further use as a basis for similar initiatives with other regional neighbors and also those further afield. [6] Presently, Tokyo can also count on the participation of new external players in the regional agenda, primarily from among NATO countries. For example, Britain is currently negotiating its participation in the Comprehensive and Progressive Trans-Pacific Partnership, which is actually moderated by Tokyo. Moreover, there is more to London's interest in the Indo-Pacific region than just a desire to partially recoup the costs associated with Brexit. The interest is also political, particularly related to the situation around Hong Kong, which the British are watching very closely. London and Tokyo have been conducting joint military exercises since 2016, and work on an agreement similar to the Japanese-Australian one is reportedly underway now. [7]

France, which has overseas territories in the Pacific Ocean, is also a potential partner of Tokyo on the Indo-Pacific track. [8] In Japan, they can also count on Canada's interest in defense-related cooperation. [9] Needless to say, Tokyo realizes full well that new potential "semi-allies" will be closely watching the outcomes of the agreement with Australia, as this may serve a precedent for similar and wider-scale projects with other countries.

In conclusion, getting back to the issue of foreign military personnel in Japan, it is worth recalling the tragic events that happened there on March 11, 2011 when a Russian Emergencies Ministry helicopter brought a group of  our rescuers to Fukushima, and another team of Emergencies Ministry employees and nuclear workers arrived by plane in Tokyo. They marched 500 kilometers to the city of Sendai (Miyagi Prefecture). At the same time, it was noted that bureaucratic hassles hampered foreign rescuers’ work in Japan. Perhaps one should consider the possibility of an appropriate agreement to be signed by Russia and Japan. Tokyo will not agree to a full-fledged Reciprocal Access Agreement with Russia of course, since the do-what-I-tell-you relationship still existing between Washington and Tokyo hasn’t gone anywhere. It is still possible, however, to narrow the scope of such a document to dealing with the consequences of natural and man-made disasters, rescue operations and countering sea piracy.