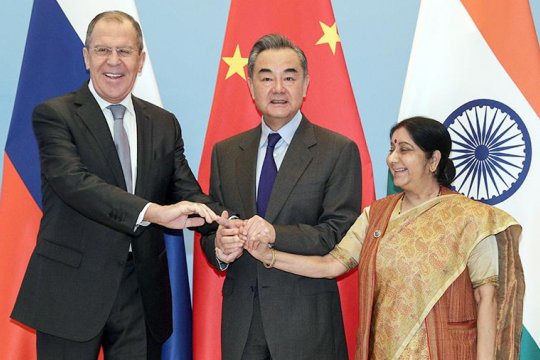 Russia, India and China will soon be marking the 20th anniversary of their trilateral dialogue-consultation format (RIC). The idea was proposed (primarily in a scientific sense) by Yevgeny Primakov (who served as Russia’s foreign minister in 1996-1998, and in the 1990s, foresaw the strengthening of Russia, India and China, which eventually made these large continental powers an integral part of the new world order). However, the RIC forum is largely the outcome of an initiative put forward by the outstanding Russian expert in Oriental studies, Professor Mikhail Titarenko, who laid the tradition of annual tripartite meetings of scientists from the three countries.

The previous RIC forum (already the seventeenth) was recently held in Beijing, where scholars and diplomats from the participating countries summed up the results of what had been accomplished, and discussed the challenges and opportunities the RIC is facing today.

Now that China, Russia and India constitute the most important geopolitical force both in the Asia-Pacific region and elsewhere in the world, much depends on how closely they are able to coordinate their efforts and positions on key political and economic issues. The RIC countries are building their relations on the basis of the principle of “three NOTs”: not confrontation, not a bloc, not directed against third parties. Such relations can serve as an example for other countries to follow, and are the cornerstones of the emerging multipolar world order.

Acting on scientific recommendations, foreign ministers and the heads of foreign ministry departments of the RIC countries hold regular consultations. The tradition of trilateral summits of RIC heads of state has also been revived, with the latest such meeting held on the sidelines of the G20 summit in Osaka in July.

In Osaka, President Vladimir Putin clearly underlined the geopolitical interconnection of the UN, BRICS, SCO and G20, plus “strengthening the authority of the WTO” and the International Monetary Fund as the “paragon of a modern and just multipolar world that denies sanctions as legitimate actions.” [1]

Putin’s words reflect the priorities of RIC as a force designed to strengthen a world order based on rules, respect for international law and the UN Charter, to minimize the negative impact of the policy of sanctions and the unilateral dictatorship espoused by the Trump administration.

Reform of the UN, WTO and IMF, coordination of national development strategies, rejection of sanction pressure and attempts to constrain  technological sovereignty, maintaining strategic stability, countering international terrorism and other non-traditional challenges and threats to international security, trade, economic, cultural and humanitarian cooperation, a dialogue between civilizations - all this, and much more, is viewed by the RIC countries as the subject of consultations and discussions.

This is not to say, of course, that the RIC members see absolutely eye to eye on everything, because otherwise they would hardly need such a format. Powers like Russia, India and China, which pursue an independent foreign policy, simply cannot have a complete coincidence of their national interests. Therefore, RIC also serves as a mechanism for overcoming contradictions and disagreements. For example, India is wary of China’s Belt and Road Initiative (BRI), while the “Indo-Pacific Partnership” already worries Russia and China, with the latter seeing it as just another strategy to contain China. India, for its part, is trying hard to convince its Russian and Chinese partners that the “Indo-Pacific Partnership” is not directed “against anyone.”

RIC’s activities are very much sought after nowadays and are getting more and more needed every day as a tool for finding answers to the key challenges of our time.

In a joint statement, issued after the 20th Russian-Indian summit, held on the fringes the WEF-2019 in Vladivostok, the participating leaders vowed to intensify cooperation within the framework of the Russia-India-China mechanism, to consistently promote common approaches to pressing issues of the global and regional agenda, with emphasis on adherence to international law, countering the spread of protectionism and unilateral sanctions, and the fight against terrorism and other new threats and challenges." [2]

Scientists and diplomats from Russia, India and China believe that RIC will eventually become the backbone of regional international organizations and dialogue formats such as the SCO and BRICS, as well as the generator of the rules and norms of the new world order based on multi-polarity, justice, equality and inter-civilizational dialogue.