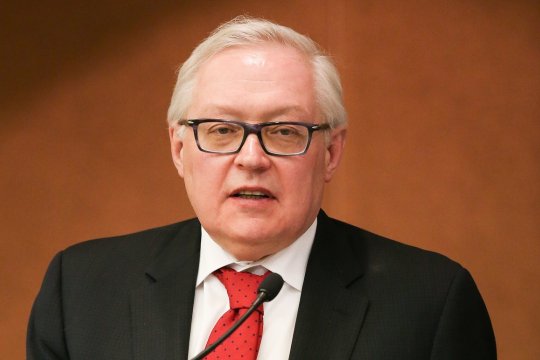 On January 14, Russia’s BRICS Sherpa and Deputy Foreign Minister Sergey Ryabkov held a news briefing in Moscow on the start of Russia’s presidency in the five-nation association in 2020.

During the news conference, Sergey Ryabkov outlined the key priorities of Russia’s BRICS presidency and the roadmap of BRICS events in the coming period. He said that since its inception in 2009, BRICS has turned from a special interest club into a multilateral, flexible institution promoting a fairer, democratic world order. Amid the current instability, the organization upholds the principle of respect for national sovereignty, defends the principles of international law, declares the indisputable priority of the United Nations and rejects unilateral pressure imposed by any country.

Sergei Ryabkov said that during the period of Russia’s chairmanship, the five BRICS countries would prioritize efforts to improve the quality of life of their citizens. The organization will hold 150 events, including two summits and 20 ministerial meetings, in Moscow, St. Petersburg, Chelyabinsk, Yekaterinburg, Kazan, Novosibirsk, Samara, Saransk, Sochi, Ulyanovsk, Ufa, Khanty-Mansiysk and Yaroslavl. Much attention will be paid to such important dates as the 75th birthday of the UN and the 75th anniversary the end of World War II.

In the course of his news conference, Sergei Ryabkov answered questions from journalists.

International Affairs: These days, the system of international treaties that has emerged since the end of World War II is facing serious challenges. The US withdrawal from the Intermediate Range Nuclear Forces Treaty (INF) threatens to undermine the regime of non-proliferation of weapons of mass destruction (WMD). What is the BRICS members’ take on this problem? Which of its aspects deserve their special attention during the period of Russia’s presidency of the association?

Sergey Rabkov: We continue working consistently in this area. The BRICS countries see eye to eye on the need to strengthen the regime of the Treaty on the Non-Proliferation of Nuclear Weapons (NPT). India’s non-participation in this agreement is not a big problem really, since we have a very productive dialogue with our Indian colleagues on arms control and non-proliferation. We certainly believe in the universalization of the NPT, but there are many more relevant and significant issues we should and will closely interact on with our Indian colleagues. This is what we are actually doing now. We greatly appreciate Russian-Indian collaboration at specialized international venues, whether in New York, Geneva, Vienna or elsewhere. We also appreciate our Indian colleagues’ dedicated effort to preserve the architecture of international security and non-proliferation of weapons of mass destruction, resolve problems in a constructive manner, including the preservation of the Joint Comprehensive Plan of Action (JCPOA), the nuclear deal with Iran, whose future has recently been called into question, primarily because of the irresponsible behavior of our colleagues from Washington.

I can give many more examples of this. I’m still not sure that BRICS will become the center point of arms control and non-proliferation work any time soon. There are other platforms for doing this. BRICS represents a platform for dialogue in this area, and we will be using it, but we don’t expect to become trendsetters here. We don’t need that. Russia respects the specifics of each BRICS country, including their position on this particular issue.

International Affairs: There is some disagreement among the BRICS countries on issues of cyber security and Internet governance. They still want to have their own information security. Are there any chances of closer aligning the BRICS countries’ positions on this issue?

Sergey Ryabkov: The issue that you just mentioned is not just “hot,” but extremely relevant too. We will be actively working on it during the year of the Russian presidency of BRICS. We will be focusing our attention on various aspects of international information security, working on the Internet and the principles governing its work. Russia has put forward multiple initiatives in various formats at international venues, including in the SCO format. We believe that the appearance of a legally-binding multilateral instrument in this area acceptable to all BRICS members would contribute very significantly to the creation of predictable and understandable conditions for working and protecting the interests of all Internet users. This would effectively guard against any unlawful use of this environment for purposes that are at variance with the interests of sustainable social progress, including when it comes to fighting cybercrime.

Cybersecurity is a complex, multifaceted issue, no doubt about that. We are also aware of the BRICS countries’ traditionally diverging approaches in this area. Still, just like in many other issues, the five countries are primarily motivated by their interest in creating a common denominator that would unite them on the basis of fundamental approaches, rather than drive them further apart. We are going to work on this real hard, creating a critical mass, which at the end of the day would help us adopt a common document. We are not pushing things too hard here or anywhere else, of course.  BRICS should work on a consensual basis, without any attempts to impose anything on anyone, let alone dictate.