Sergey Shoigu: The military capabilities of NATO – against Russia 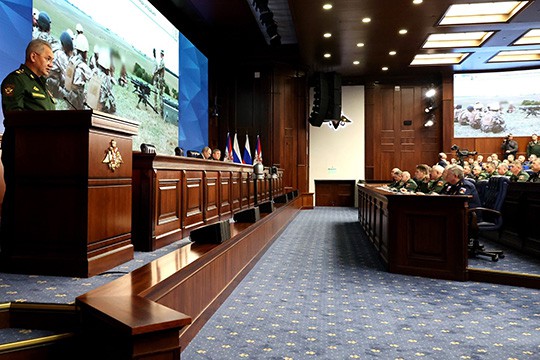 On December 21, President Vladimir Putin spoke at an expanded meeting of the Defense Ministry Board at the National Defense Management Center where the key areas of Army and Navy development including the Special Military Operation or SMO have been discussed.

In his report the Minister of Defence, Army General Sergey Shoigu (photo) noted that currently, the military capabilities and potential of almost all major NATO countries are being actively used against Russia. In his words, in Ukraine, Russian servicemen are being countered by combined Western forces. The U.S. and its allies are pumping the Kiev regime with weapons, training soldiers, providing intelligence, sending advisers and mercenaries, and waging an information and sanctions war against us.

The Ukrainian leadership is resorting to prohibited methods of confrontation, including terrorist attacks and contract murders, and the firing of heavy weapons at civilians. Western countries are trying to ignore all of this, as well as elements of nuclear blackmail, such as the provocations against the Zaporozhye NPP and the so-called ‘dirty nuclear bomb’ scenario.

Russian forces continue to destroy military targets, launch massive high-precision strikes against Ukrainian military command system, military-industrial complex enterprises and related facilities, including energy ones. The chain of supply of foreign weapons is being destroyed and Ukraine's military potential is being crushed. At the same time, all preventive measures are being taken to avoid civilian losses.

To make up for the losses, the United States and NATO countries have multiplied their military aid to the Kiev regime. Twenty-seven countries have already spent $97 billion on arms supplies to Ukraine, much more than what the Americans abandoned in Afghanistan. There are NATO staff officers, artillerymen and other specialists in the combat zone in Ukraine. More than 500 US and NATO spacecraft operate in the interests of AFU, of which more than 70 are military, the rest are dual-capable space vehicles.

The U.S. and its allies spend a great deal of money on information and psychological pressure on Russia and our allies. Russia has fully understood what the supposedly "free Western press" is all about. Thousands of fakes about the events in Ukraine are published daily on command from Washington, according to the same templates. Hundreds of television agencies, tens of thousands of print media outlets, and media resources on social networks and messengers are working for this.

The total silence of the Western media about the war crimes of the Ukrainian military is the height of cynicism. At the same time, the criminal regime in Kyiv and neo-Nazis are being glorified. The terrorist methods of the AFU are presented as legitimate self-defense or presented as the actions of Russian units. Ukrainian nationalists have taken on the role of barrier troops. Every day we receive data on the shooting of AFU servicemen evading from taking part in combat missions.

Recent partial mobilization totaling 300,000 men in Russia has increased the combat capabilities of the troops and intensified combat operations. Russian troops liberated five times the territory that the Luhansk and Donetsk People's Republics had occupied before February 24, 2022. There were more than 20,000 men enlisted as volunteers as well.

Given NATO's desire to build up its military capabilities near Russia's borders and expand the Alliance to Finland and Sweden, steps need to be taken to create a corresponding group of forces in North Western part of Russia.