The West stakes everything on parliamentary elections in Moldova 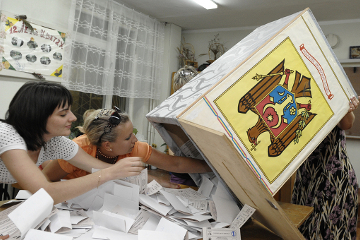 An election campaign Moldova has been witnessing as it prepares to vote for a new parliament on 28 November has turned to be rather tense, partly because of the West's meddling into the process.

The campaign had just begun when twenty-seven foreign ministers of the European Union (EU) paid their visits to Moldova to praise efforts made by the ruling four-party Alliance for European Integration (AEI).

On 21 October 2010 the European Parliament released a resolution which approved the reforms in Moldova and promised visa liberalization for the Republic (without mentioning the deadline, however). Despite the fact that the text of the resolution was quite vague, the parties comprising the AEI announced that Moldovans will be able to travel without visas in 2012 and will be accepted in the EU in 2014. It means that the AEI is being supported directly from Brussels.

Well-known centers in the U.S. responsible for color revolutions in the former Soviet republics have been training activists from Moldova`s ruling party for almost a year, hundreds of thousand dollars already spent on the campaign. There are also some other organizations in Europe that have similar goals in Moldova: the Jean-Jaurès Foundation, the Konrad Adenauer Foundation, e.t.c. Moldova is decorated with banners saying 'Europe is prosperity, CIS is poverty!' President of Romania Traian Basescu made a public announcement that he would support the AEI morally and diplomatically.

Mr. Basescu said he was ready to sign a border agreement with Moldova to deprive the Communist Party one of the keys to successful election campaign. The Communists, the Social-Democratic party, the Democrats, and Equality faction had always criticized Romania for not signing a border agreement with Chisinau and thus did not recognize Moldavia's sovereignty. On 8 November, just 20 days before the election campaign is due to be over, Bucharest and Moldova finally signed 'The Treaty on state border, co-operation and cross-border assistance'. The agreement does not recognize the Moldova-Romania border politically, but helps the leader of the Liberal-Democratic party Vlad Filat establish a reputation of an assertive politician.

Romania has openly funded dozens of newspapers and magazines in Moldova, with Romania's First Channel launched all over Moldova two weeks ago (in addition to the already existing Public-TV and Journal-TV channels that evidently back the AEI).

On election day the Romanian authorities undertook an unprecedented step allowing Moldavian students who study in Romania travel free of charge on intercity buses and trains so that they could cast their ballots for the pro-Romanian parties. The AEI bothered in advance to open 80 instead of 40 polling stations abroad, with only five in Russia (despite the fact that about 500,000 Moldovans are employed there). There are 8 polling stations in Romania and 20 in Italy.

The Liberal-Democratic Party led by Vlad Filat has proved to be especially aggressive. In August and October Filat – with active support from Brussels – met the leader of Transnistria, Igor Smirnov. The talks resulted in launching of the Chisinau-Odessa train and promises to resume telephone communication between the left and the right banks of Dniester, as well as to simplify exports of goods from Transnistria. Filat`s ratings then increased both among the pro-centrist and the Russian-speaking voters, while the pro-Kremlin parties in Moldova suffered a serious defeat. Officials at the western embassies in Chisinau could be heard saying that Russia must be 'ousted from Moldova'...

As far as I know, a group of experts on political technology from the U.S. and Georgia arrived in Moldova in late October. By the way, 'experts' from Georgia (as well as from Serbia) were in Chisinau during a civil unrest (an attempted color revolution) on 7 April, 2009.

In mid-November several non-governmental organizations supported financially by the western foundations (including the Soros Foundation) held a 'Clean Parliament' campaign submitting the list of 30 politicians who in their opinion are unworthy of being members of the parliament. Twenty-three out of thirty surnames belonged to the members of the pro-Russian Communist Party.

From 4 till 21 November the West financed six opinion polls in Moldova. Among three companies named to unveil the results two were from Romania, while the third served one of the parties comprising the AEI. The results showed that the Communist Party (with 45% of the votes in July) had in a few months dropped to 35%. It is clear that these polls were aimed to shape the voters` opinion. Meanwhile, on 18 November Moldova`s largest information outlet Ava.md released the results of another opinion poll saying that the Communists might get some 53% of the votes.

The Moldovan television did not report anything on the survey conducted by Ava.md, while the results of the other opinion polls were available day and night, which directly indicates that the opposition is facing the media blockade. Agitators for the Liberal-Democrats and the Liberal party have been active in rural areas of Moldova, persuading the locals not to vote for the Communists if they do not want another 7th of April.

The parliamentary elections in Moldova are scheduled for 28 November.