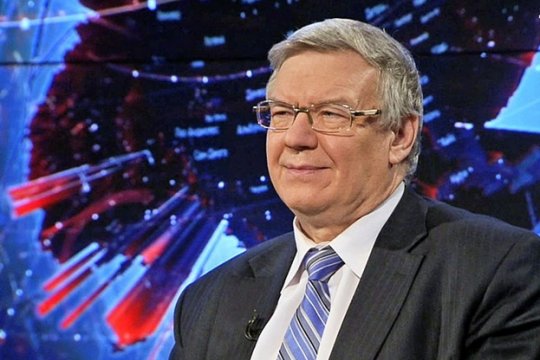 The United States has decided to impose new sanctions against Russia. The first package of sanction measures of the US State Department will come into force on August 22. Vladimir Vasiliev, chief researcher at the Institute of the USA and Canada of the Russian Academy of Sciences, believes that the new sanctions will lead Russian-American relations to the "point of no return", where there will be no possibility left for a constructive dialogue between the current Russian and American elites.

"International affairs": Did the decision to introduce new sanctions come as a surprise or was it expected given the development of relations between Russia and the United States?

Vladimir Vasiliev: The news is quite unexpected, since on Monday Moscow was visited by Rand Paul (US Senator from the Republican Party), who said that he had brought a letter from Donald Trump. This could speak of a positive sign in the development of cooperation with Russia. Against this background, the summoning of our envoys to the US State Department was quite a surprise. From statements of the State Department it is clear that for now these sanctions are not very well thought out. Everything looks as if the US leadership chose to announce about the sanctions merely declare that sanctions have already been announced. If someone said: "Do not impose sanctions", they would respond: "Sorry, the bus is gone, you are late,  they have already been imposed." It seems that there is a very serious battle going on within the American administration. Fighting in this battle against the White House is the nearest entourage of Donald Trump - Secretary of State Michael Pompeo, Treasury Secretary Steven Mnuchin and representatives of the intelligence community.

"International affairs": This means that there are two camps: one is trying to establish a dialogue, and the other is exacerbating the crisis, right?

Vladimir Vasiliev: Yes, we can call it a ‘deep state’ or Washington bureaucracy, which exists in the US State Department and other departments. Undoubtedly, the intelligence community was scared by the recent statements made by Donald Trump in Helsinki. I think that today in the executive branch of power there is a hidden sabotage of the US president's course for improving relations with Russia. You can even call this an element of conspiracy, but, apparently, it does exist and is becoming visible.

"International affairs": How will the first package of sanctions affect the Russian economy?

Vladimir Vasilyev: The state mechanism does not normally function this way. At first, sanctions are worked out, then approved (as was during Barack Obama’s tenure), and only after that they are announced. Today it turns out that the cart is in front of the horse. They first announce sanctions, and then think about what sanctions to impose. When they announced that a ban on dual-use products would be introduced, mainly on electronics, a State Department representative could not say what the consequences of these sanctions would be for the Russian economy. The statements that followed boiled down to the fact that the Russian economy would suffer a lot. For many reasons, this is at odds with the reality. It can be concluded that representatives of the US State Department, demonstrating little understanding of the economy, made their statements on the basis of secondary information. If you look at the first package of sanctions: it will have some impact, but in any economy, sanctions are introduced at first, possibly causing some damage, and then their replacement is sought. Today, replacing the American electronics with those made in China is just a matter of time. Although the Americans have not yet determined what they will ban and what they will not. The second problem is related to the specifics of the US export legislation. The US Department of Commerce should coordinate export of dual-use technologies with the State Department and the Ministry of Defense and only after that they should issue a license. The US export control law still allows companies to obtain permission to export such technologies. What procedure the sanctions which are to be announced in two weeks will follow is a big question. The US leadership are dragging their feet over this issue. From all this I conclude that the political component plays a much larger role than the economic one.

"International affairs": Can such a political decision influence the investment climate?

Vladimir Vasilyev: It can affect it to a certain extent but considering that trade turnover between Russia and the US is only $ 20 billion, this is not a very big loss for the Russian economy. Perhaps, in particular sectors sanctions will create problems but not radical. The second package of sanctions, which will be announced around November 22, is more substantial. America is embracing the principle of an ultimatum: an entirely new way of using sanctions weapons. A trаnchе system is being created. After the first tranche, an ultimatum is declared. If you do not agree, there will be a second, a third, and so on. In addition, there is such a problem as reputation. Today, such a power as Russia and its leadership cannot make concessions in this way. Nevertheless, a mechanism is introduced for a consistent destruction of relations using sanctions as a weapon. Russia will be presented with an ultimatum the meaning of which is as follows: "Acknowledge your mistakes and repent for using chemical weapons in Salisbury and for promoting the use of chemical weapons in Syria."

But neither the "Skripal case" nor the incidents in Syria have been proved. So far, all these cases have been analyzed at the level of groundless statements. Therefore, the question arises: hasn’t Washington been playing this game for too long? Because even the British resolved to push the "Skripal case" into the background. All attempts to prove the use of chemical weapons in Syria did not yield anything either. And at this very moment they require Russia to acknowledge its mistakes. There will immediately be a precedent. Recognize interference in US elections, admit to violating human rights and so on. Sanctions in this case are becoming a powerful economic weapon, which is used for political purposes. The status of the diplomatic mission will be lowered, which has never happened before, if only during the Cold War in the late 40's - early 50's. Fears that the economic war will grow into a cold war 2.0, are becoming a reality.

"International affairs": What does the US want to gain by launching such an ultimatum?

Vladimir Vasiliev: If a country is looked upon as a sponsor of terrorism, one can raise the issue of depriving it of its status as a permanent member of the UN Security Council. This is a very serious gain. If Russia is deprived of the right of veto and seats in the Security Council, what impact will this have on international relations? The entire UN system, which was created as a logical outcome of the Second World War, will collapse. That's where we're heading. The five nuclear powers, guarantors of international security, are a format that allows us to avert a new world war. In the course of all these 70 years we were successful in avoiding a third world war. However, given the current layout of forces, we could return to the world before 1945, with all the ensuing consequences.

"International affairs": What will the second package of sanctions lead to?

Vladimir Vasiliev: It provides for a reduction in diplomatic representatives. The Americans will recall the ambassador, and so will the Russians. This means a curtailment of Russian-American diplomatic relations. And the US’ European and other allies could follow suit. Perhaps, they will choose not to, but today many are oriented at Washington. Crippled diplomatic relations mean balancing on the brink of an economic war, which could then transform into a real one, a war that assumes devastating proportions through inflicting destructive blows on economic, scientific and technical potentials.