US vs China: “era of great-power competition” 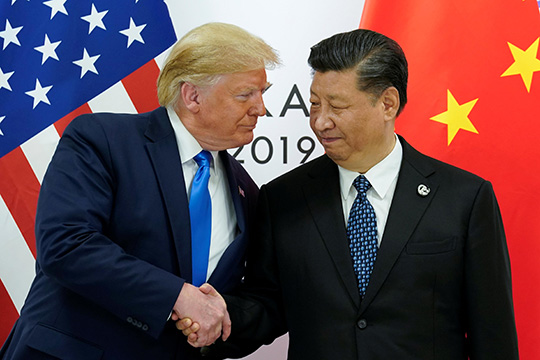 With the year 2019 already on the way out, its preliminary results can already be summed up, and one of the main takeaways is the systematic effort by the United States to deter China by waging a trade and economic war on it and using technological boycott and military-political pressure.

US Defense Secretary Mark Esper recently went on record saying that Washington views China’s importance in “a new era of great-power competition” as a top priority, adding that the Pentagon will be looking for additional forces and means to dispatch to the Indo-Pacific region.

China was mentioned for the first time in a joint declaration, issued by NATO leaders at their December 3-4 meeting in London: “We recognize that China’s growing influence and international policies present both opportunities and challenges that we need to address together as an Alliance.” [1]

Unfortunately, there are many more challenges now existing in the world than there are means of tackling them.

Mindful of the fact that it lives in “an era of great-power competition,” (as is recognized by US doctrinal documents), Washington is adapting its foreign policy to the new reality and using all means available to it to hold back any candidate for global leadership, above all China.

There are at least two conclusions to be drawn from this. First, with all the “i”s already dotted, one could now give a more sober assessment of the partner with whom it was possible to come to an agreement yesterday, or so it seemed, on the basis of mutual respect for each other’s interests and a reasonable compromise. Alas, there is no such a possibility now visible in US-Chinese relations.

China’s Foreign Minister Wang Yi has accused the United States of having seriously undermined the hard-won mutual trust between the two countries, and of constantly criticizing Beijing. According to him, Washington used various international events to disparage China's social system, development paths, mutually beneficial cooperation with other countries, and falsely blamed Beijing for all imaginable of crimes.

Notably, Mr. Yi’s rhetorical broadside came on the day China and the US completed a “phase one” trade deal, when it seemed that both sides could now breathe a sigh of relief. However, Beijing is clearly aware of the instability and limitations of this hard-won progress amid the generally bleak state of bilateral relations.

The second conclusion that can certainly be drawn by China is the need to look for new opportunities in this situation, including in the field of technology, which is the main area of US-China confrontation, inspired by Washington. And is exactly where China has a lot of wiggle room to count on.

In September 2019, Japan and the EU signed a partnership agreement on sustainable ties and quality infrastructure, partly in response to the escalation of trade tensions between the US and China. There were other reasons too though. On the one hand, the new US Export Control Reform Act of 2018, set to take effect next year, will inevitably harm the economy of both the EU and Japan. On the other hand, Washington’s concerns about China’s One Belt, One Road initiative, as well as its information and communications component - the Digital Silk Road (DSR) - have increasingly been shared by Tokyo and Brussels. [3]

DSR, which is Beijing’s asymmetric response to the US challenge, provides for the creation of digital markets through the development of e-commerce systems and electronic payments, which are now increasingly contributing to the development of smart cities. Relying heavily on information and communications technologies, Alibaba, Tencent and other Chinese companies are trying to dominate the international system by offering cheap and reliable network connections.

The international payment system SWIFT, which the United States is trying to weaponized as a sanctions tool (mainly against Iran). Right now, SWIFT is switching to the 5G communications system, and who knows exactly which equipment and communications standard it will eventually go for – maybe China’s Huawei, whose global leadership in this telecoms segment is so obvious? Well, this is extremely hard to imagine though, especially given the enormous opposition such a switch could encounter. But who knows…

Overall, despite all the euphoria that reports of a US-Chinese trade deal have caused worldwide, it would still be safe to assume that US-Chinese relations are entering a long period of “hybrid peace” that will differ from  “hybrid war” in more sophisticated and unforeseen forms of confrontation, very serious new challenges and asymmetric responses to them.

Find other International Affairs articles by logging on to our Yandex.Zen channel.