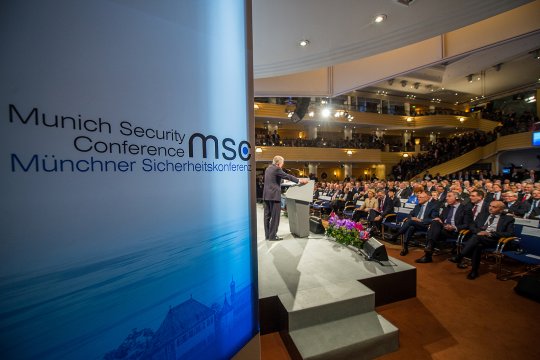 The 2019 Security Conference in Munich attracted so much attention not only due to the top-notch lineup of participants, but also to the keynote report released by the organizers as a curtain-raiser for the high-profile gathering.

Titled “The Great Puzzle: Who Will Pick Up the Pieces?" the Munich Security Report (MSR) was pitched as a recipe for preserving and strengthening the “liberal world order,” which, according to the authors, is becoming increasingly fragmented and chaotic.

On the subject of global security the report was supposed to offer a careful examination of various aspects of security in key regions of the modern world, including, of course, the Asia-Pacific region (APR). Disappointingly, however, the report’s “Regions” chapter said nothing about East Asia and the APR, with the “Actors” chapter containing just a lapidary mention of Japan, which is viewed by the authors as an outpost of the “collective West” in Asia.

That being said, the report’s opening chapter still contains a brief paragraph about “the return of great power competition,” including the course on confrontation with Russia and China, taken by the Trump administration.  “Strategic thinking in China is increasingly based on the assumption that the United States is a superpower in decline, which will eventually have to give up its dominance. The Communist Party [of China] sees itself on the winning side of history.” [1]

Another section of the report looks at issues pertaining to regional security in East Asia and the Asia-Pacific region through the eyes of Japan and the established Western doctrine. It says, for example, that North Korea’s nuclear program poses “an immediate threat” to Tokyo, and China’s increasing power is a “long-term strategic challenge.”

Therefore, the report’s authors see Japan as being “at the forefront of countering China’s regional influence,” be it the Chinese Belt and Road Initiative (IPP), competition in the development of critical technologies, the development of the Comprehensive and Progressive Trans-Pacific Partnership, which entered into force in December 2018, or strategic cooperation in the “Quad” with Australia, India and the United States (Indo-Pacific Partnership).

What is really surprising here is the openly confrontational stance of the report’s authors, who consider all the above exclusively as instruments of competition and opposition, not of potential partnership and cooperation. Meanwhile, China, which proclaimed a “win-win strategy” in its foreign policy, does not consider the Japan-dominated Asian Development Bank as a competitor to its Belt and Road Initiative, has been involved in multilateral consultations on the Comprehensive and Progressive Trans-Pacific Partnership, and would like to view the newly announced Indo-Pacific Partnership as being more than just a military-strategic alliance (no matter how anti-Chinese it may be), but also as a means of promoting trade and economic cooperation in the region.

The report also contains some curious observations about the Japanese government’s desire to revise Article 9 of the country’s constitution, which limits Japan’s military capability to just Self-Defense Forces, while prohibiting it from having a full-fledged army. These aspirations, described by the report’s authors as the “crown jewel” in Prime Minister Shinzo Abe’s priorities, are rejected by the majority of the population of Japan itself and all its neighbors.

The report still emphasizes that while Japan spends only around one percent of its GDP (world’s third largest) on defense, its Self-Defense Forces boast more personnel than Germany and more warships than France. [2]

What the report fails to mention however, (save for just a brief mention of the Indo-Pacific Partnership), are attempts to create multilateral security negotiation and consultation mechanisms in East Asia and the Asia-Pacific region. Including the Russian-Chinese initiative to create an inclusive and “networked” regional security system, the security-enhancing effort being made by the ASEAN Regional Forum (ARF) and the East Asian Summit (EAC), and also by the Conference on Interaction and Confidence-Building Measures in Asia (CICA).

Overall, the Munich Conference Report is more disappointing than inspiring, not only by its lopsided, “West-centric” approach to global security, confrontational messages and its lack of attention to East Asia and the Asia-Pacific Region. What is even more important, however, is its misguided desire to reinforce the old “liberal world order,” which apparently can no longer be put together from pieces of this “puzzle.”

Instead of assembling this outdated puzzle (or gluing together a broken cup, if you will), why not giving a thought to a new world order, which is coming up to replace the old Euro-Atlantic "liberal" one?