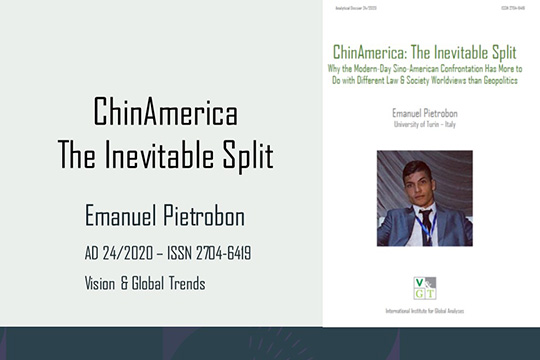 ChinAmerica: The Inevitable Split – Why the Modern-Day Sino-American Confrontation Has More to Do with Different Law & Society Worldviews than Geopolitics

The Sino-American hegemonic confrontation may be the result of elements that go beyond geopolitics, touch a more intimate sphere and have a deeper origin, namely the very social and legal foundations on which the two countries are based and modelled and accordingly shape their worldviews. Assuming the validity of this line of thought, the end of the symbiotic relationship between the two world-largest economies was only a mere matter of time. Indeed, no true strategic partnership can exist between the US, which is politically, culturally and economically liberal and is devoted to the promotion of its system across the globe since the early decades following the independence, and China, whose conception of state role in domestic and world affairs is totally different from the European and American one and is the combination of a millennia-old complex and rich history.