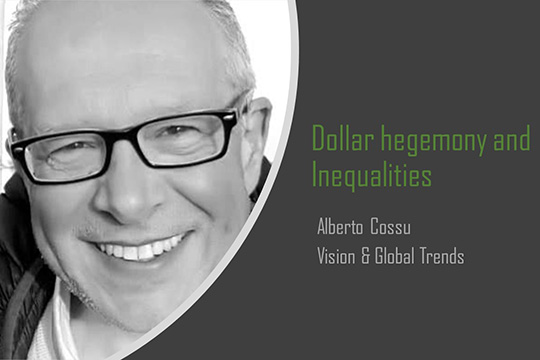 Many countries are engaged in implementing mechanisms to weaken the dollar. They chase the prospect that the world can be better once the US currency loses its strength and hegemony.

China [In China, fears of financial Iron Curtain as U.S. tensions rise] is pushing for a reduction in the use of the dollar in its economy, and also globally. The digital Yuan project, agreements with several countries to regulate trade and investment in their respective currencies are part of the dollar’s counter -strategy.

The same strategy is as the Russian Federation [Cina-Russia, patto contro il dollaro] that also aims at gradually scaling back the use of the dollar. The mechanism developed by the European Union to cushion the impact of the US sanctions on Iran is another example [Geopolitica e sanzioni contro l’Iran Il caso dell’Oceano Indiano Occidentale]. Recently, there were signs of dollar weakening [As dollar slides, some investors fret about its status as world’s reserve currency]. It has lost strength against the euro [Sfida al dollaro: un’egemonia che vacilla tra mille incognite], also due to the high level of debt in the US.

But for central bankers around the world, the dollar remains the reserve currency by excellence. According to data from the International Monetary Fund [It Is Time to Abandon Dollar Hegemony] updated to the first quarter of 2020, the dollar holds a 62% share among reserve currencies while the euro is worth 20% and the Chinese yuan 1.9% and yen 5,7%. In any case, the dollar is always in demand, and no options loom on the horizon.

The United States mainly feels the positive effects of hegemony. However, the American ruling class [Covid Supercharges Federal Reserve as Backup Lender to the World] is beginning to think that hegemony brings advantages but also disadvantages that polarize the economy and politics of the country. The impact also extends to an international level, creating economic and social imbalances that are not easy to manage and generating growing strain on a geopolitical level.

The United States was able to enjoy, thanks to the hegemony of the dollar, the privilege of borrowing money from other countries at low cost and somehow living beyond their means, but also playing the role of world economic engine by using its spending power.

The country’s banking and financial system and big multinationals have benefited enormously. A financial and speculation-oriented economy has emerged. Work, especially jobs related to manufacturing, has paid a heavy price. As some analysts assert, the USA has not yet suffered from relative decline, and in fact, we can only speak of an American hegemony combined with the military and cultural one [The Comeback Nation; Declining Dollar, Declining America?; Dollar dominance is as secure as American global leadership; The Eurasian Century has already begun; Global trade’s dependence on dollars lessens its benefits; Is the Almighty Dollar Slipping?]

However, this has happened at the expense of American workers and the lower classes. A strong dollar prevented the expansion of the country’s manufacturing base because American products cost more than the competition. This fact has pushed imports from abroad and has damaged American productions, especially those located in market segments with low added value.

This has generated a large deficit in the trade balance with foreign countries towards partners such as China and Europe, causing the gradual weakening of the country’s manufacturing system and generating vast areas of unemployment and underemployment. In turn, the social discontent also reflected on the political choices that led to the election victory of the current President Trump in 2016.

In short, having a strong currency, which serves as a reserve for all countries in the world, has advantages including the chance of imposing sanctions rather than using force.

This strong currency can be employed as a weapon against geopolitical competitors as in the most striking case of Iran, but there are disadvantages.

As a matter of fact, the demand for dollars keeps high the US currency rate but at the same time makes life difficult for the American manufacturing system whose products are less and less price competitive. Tariffs are not enough to correct structural imbalances such as the negative deficit in foreign trade with Europe and China.

That is why the idea of an agreed or even unilateral desertion from dollar hegemony would not be an option entirely contrary to American and perhaps international interests.

The US Treasury Secretary told CNBC that it is in the national interest to keep the status of a world reserve currency, which the current administration does not intend to leave [Treasury Secretary Mnuchin says he does not advocate a weak dollar policy].

Such a choice is certainly not on the current political agenda. However, the international community and the US should consider the advantages it could generate for the entire world system, given the growing competitiveness that features China and Europe relations.

A unilateral or agreed desertion would have remedial effects on the current international trade structures. For example, the world of production and work would regain a central role by limiting the power of speculative finance, which generates many economic, social, and ethical problems in the Western world.

An agreed solution could see the biggest economies engaged in a multilateral process governed by the International Monetary Fund aimed at creating a basket of currencies to be managed by a third authority that would have the task of regulating them.

Otherwise, the US could decide to unilaterally leave the hegemony of the dollar by pushing the two main competitors to change their policies and focus on their economies, also rebalancing the international trading system. The profits of the financial system would probably be constrained. A system based more on work and production would come out, which would accelerate the emergence of an ethically sustainable economy and avoid a decline in globalization by countering protectionism.