Germany at the outset of election race 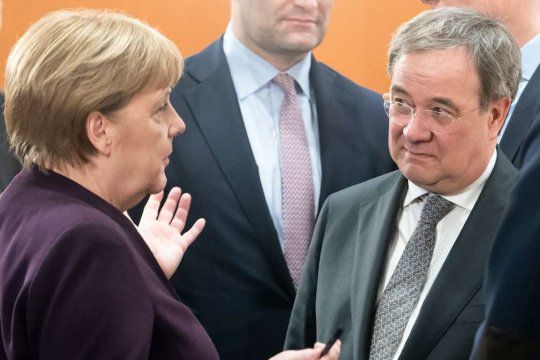 An on-line Congress of the Christian Democratic Union (CDU) has taken place in Germany, with the participants electing not only a new party chairman but also a candidate for chancellor. As Germany enters an election campaign in the run-up to parliamentary elections due in autumn 2021, three candidates ran for CDU leader – Nordrhein-Westfalen Prime Minister Armin Laschet, politician and lobbist Friedrich Merz, and Chairman of the Bundestag’s Foreign Affairs Committee Norbert Röttgen. According to the results of the voting, the post of the party’s chairman went to Armin Laschet. What does it mean for Russian-German relations? Prominent Russian and foreign experts speculate on this.

Research Director of the German-Russian Forum Alexander Rahr recalls that Friedrich Merz, a favorite of many in the CDU, led public opinion polls which were released before the voting. Many members of the CDU oppose Angela Merkel’s measures of late to reorient the party from the right, centrist positions towards the left, close to the Liberals and ‘Greens’. F.Merz wanted the Christian Democrats to return to the right, thereby consolidating its traditional electorate, which, on seeing what is happening, prefers to support the Alternative for Germany. He deemed ideal the performance of Conrad Adenauer and Helmut Kohl. However, this candidate did not win, in the first place, because A.Merkel, in the words of A.Rahr, succeeded in changing the party from the inside. «Laschet received the support of those party functionaries who got their posts under the incumbent federal chancellor, after the cleansing of the CDU which occurred throughout the past 15 years. They knew only too well that should Merz win, they would all have to resign. For this reason, they chose a candidate that in their estimates would continue the left of center policies of the current federal chancellor. As for Norbert Röttgen, he did not quite meet these requirements as he tended to lean towards the Greens», – the expert said.

According to A.Rahr, we can be 100% sure that Laschet will be elected chancellor in autumn 2021. The CDU is still the strongest political party in Europe, the expert says, and the new favorite has plenty of time to cement his position. «In early April, he is due to meet with Bavaria's Prime Minister, leader of the Christian Social Union (CSU) Markus Söder with a view to come to agreement on the candidacy of federal chancellor. In all likelihood, they will not differ on this. The reason is that  Germany has changed – it is no longer the conservative country many got used to», – the expert said.

In the opinion  of A.Rahr, Armin Laschet is a representative of those politicians that provide sober and pragmatic estimates of the prospects of a political dialogue with Russia. «When a scandal broke out in August-September 2020 over the “poisoning” of Navalny, the European Parliament brought up the possibility of a closure of Nord Stream 2, and additional sanctions against Russia. But it did not happen. Unlike countries such as Britain, Poland, and the United States, Germany knew at all times that it would be impossible to resolve important issues without Russia. Considering this, the arrival of Laschet is good news for Moscow», - the expert remarked.

From his part, Deputy Director of  the Institute of Europe of  the Russian Academy of Sciences, Germany expert Vladislav Belov points out that back in 2019, following Laschet’s statements on Russia and the Middle East, Moscow  expressed cautious hopes that he could become federal chancellor. «His main asset is the ability to listen and to persuade, unlike Friedrich Merz, who has far fewer of such qualities. Despite regular criticism of Moscow over Crimea, Ukraine, the Skripal case, and the “poisoning” of Navalny, his words have always had a constructive touch. Thus, he was immediately suspected of supporting the ideas of Putinversteher and a number of media, including Deutsсhe Welle, carried stories to this effect», – the scientist explained.

Nevertheless, Armin Laschet will likely avoid criticism for excessive support of Russia. «The results of the voting have demonstrated that he and Merz received 40% of the votes each. Now, if he  wants to foster his positions, he should attract more supporters», – V.Belov said.

For now, it is unclear, Belov said, who will become number one candidate for chancellor, as the second most popular politician after Merkel is CSU leader, Bavaria’s Prime Minister Markus Söder. But in any case, the scientist says, for Russia, he is equally acceptable a political figure.

Unlike his Russian colleague, Alexander Rahr is more cautious in his estimates.  «What affects the situation in Germany at the moment is the coronavirus pandemic. The country is under a strict lockdown, present-day German politicians fear deaths. People over 80 are particularly at risk, and there are many people over 80 in Germany. The desire to rescue Germany’s image in Europe will lead to the lockdown of the economy, which, in turn, will entail catastrophic consequences. A whole range of industries may face collapse by the summer. As a result, the ultra-right in the face of the Alternative for Germany along with the left may get a total of  20% of the votes. A stressed out society determines a voter choice», – the analyst said.

Armin Laschet is Prime Minister of Nordrhein-Westfalen, one of the most important (along with Bavaria) and the most densely populated federal land in Germany. In addition, he heads the CDU’s land association, the biggest in Germany.

Parliamentary elections  in Germany are scheduled for September 26, 2021.