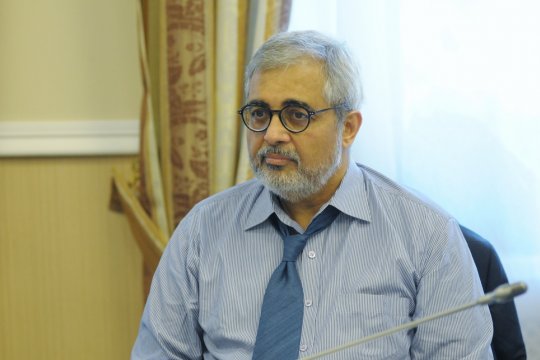 The Institute of Oriental Studies of the Russian Academy of Sciences has hosted a lecture by one of India’s top political analysts, Honored Researcher and Vice President of the Observer Research Foundation (ORF) Nandan Unnikrishnan. In his speech Nandan Unnikrishnan focused on the outcome of the foreign policy of the government of Narendra Modi, who took the post of prime minister in May 2014.

According to the expert, since then the country’s political situation has changed and can be described as unique considering that only one party  - Bharatiya Janata, and not a coalition, as was always the case in the country's political practice - came to power and has been ruling the country .

Measures to combat poverty remains one of the most pressing issues on India’s political agenda. The country is home to a third of the world's poor population (according to the UN - 22%, reports b y the World Bank  say 25%), whose salaries do not exceed $ 1.25. There is an urgent need to create jobs. Most of these people have no access to basic medical service. Equally important are issues such as the creation of new jobs and reduction of unemployment, as well as the formation of a fundamentally new education system to replace the current one, which was established in the 19th century. All these issues are as relevant as five years ago.

In foreign policy, the N.Modi government was set on easing tensions in relations with all the country's neighbors. As the first step in this direction the new Indian Prime Minister invited to his inauguration leaders of countries that are members of the South Asian Association for Regional Cooperation (SAARC), including the head of the Pakistani government Nawaz Sharif. This trend persisted in later years: during its term, Narendra Modi made a series of visits to all neighboring countries except the Maldives. In December 2015, he unexpectedly paid another visit to Pakistan, where he held talks in Lahore with his Pakistani counterpart.

But, according to N. Unnikrishnan, all these steps proved ineffective and relations with neighbors deteriorated, except for relations with Bangladesh, which saw a “warming” . However, this “warming” was rather a result of New Delhi consistently turning a blind eye to the increasingly authoritarian nature of the local political regime. The expert believes that maintaining of the current trends in the Bangladeshi policy could lead to a one-party regime to be established in Chittagong.

New Delhi has been experiencing tremendous difficulty in dealing with Sri Lanka and the Maldives. According to N. Unnikrishnan, India has failed to prove in practice that it can become a financial and economic driver for East Asia by ousting China.

It is often claimed that during Narendra Modi’s term the Indian political leadership developed a rapprochement with the United States. However, Nandan Unnakrishnan is not sure that numerous allegations about New Delhi moving closer to Washington match the reality. According to the expert, despite all the statements by the White House that it strives for close partnership with India, the United States dragged it in all the trade wars, imposing sanctions against it for purchasing weapons from the Russian Federation and buying oil from the Islamic Republic of Iran. This allowed Russia to improve its performance in strategic defense cooperation and regain its positions as top weapons supplier to India.

India’s relations with China have seen ups and downs too. In particular, they suffered a significant setback in 2017 following a conflict over a disputed territory in the Doklam mountain region in the Kingdom of Bhutan. However, relations between the two countries became warmer after the first in the history of both nations informal summit in Wuhan, held in April 2018, which, among others, touched upon settlement of border disputes. N. Unnikrishnan noted that India has increased exports to China by 10%, whereas Chinese exports to India have decreased dramatically.

India’s strategy in the Asia-Pacific region is currently developing under the influence of the concept of “Indo-Pacific”, which is not quite correctly attributed to the United States. In fact, this concept was first introduced in 2007 by Indian military analyst Gurprit Huran and was later used by Japanese Prime Minister Shinzo Abe in his speeches. The central idea of the new strategy is to contain China, which seems to be relevant for the United States but is seen in a somewhat broader context in India. Addressing the 15th Asian-Pactific Security Summit (Shangri La Dialogue) in Singapore on June 3-5, 2018, Indian Prime Minister Narendra Modi pointed out that the Indo-Pacific region was open "not only for countries with democratic regimes."

However, the expert welcomed the intensification of relations with Russia, which primarily affected strategic defense and military technology cooperation, as one of the main achievements of Narendra Modi’s Cabinet. For its part, Moscow has made it clear that it values partnership with New Delhi and will exert every effort to maintain bilateral contacts. As acknowledged by N. Unnikrishnan, this position produced a most favorable impression on Indian politicians. Thus, the attitude towards Russia experienced an interest comparable to that of the 1960s and 1970s, when the Soviet Union’s role was regarded as one creating a balance of strength in the region against China.

India’s Asia-Pacific policy is inseparable from the country's search for a place in Northern Eurasia. New Delhi is against China’s concept "One Belt - One Way" and has spoken against the hegemony of any major power in “Indo-Pacific”. Meanwhile, it opposes interference in the internal affairs of the Asia-Pacific countries by top players outside the region. Simultaneously, New Delhi attached tremendous importance to the Arctic direction of its foreign policy. The Indian political leadership is pursuing a two-point agenda in the Arctic acting as a defender of the environment and an exporter of crude oil.

India is vitally interested in joining the Asia-Pacific Economic Cooperation forum (APEC). Such an intention fits in with a course for comprehensive cooperation with countries of South East Asia, which was outlined in the late 1990s. However, according to Mr. Unnikrishnan, if this is to happen, India should be invited to join the organization by none other than its leadership. Such plans by New Delhi were prompted mainly by the desire to maintain its influence among the vast Indian diaspora in a number of APR countries (Singapore, Malaysia, Fiji, Australia). In addition, India is fully aware that despite all the remaining differences with China and considering the economic and geopolitical changes of late, Beijing will continue to have a serious influence in the region.

Positive trends for India are also observed in the Middle East, where New Delhi cooperates with many countries that historically have been in difficult relations with each other. As an example, Mr. Unnikrishnan gives Saudi Arabia, Iran and Israel. About 7 million Indians work in this region (mainly in the Sunni countries). Notably, in the United Arab Emirates local authorities oppose the arrival of Indian Muslims. This attitude is due to the fact that visitors become actively involved in political life. In part, such a phobia could have been triggered by the memory that the Islamic world of the British Empire was not ruled from London, but from Delhi.

According to Nandan Unnikrishnan, the parliamentary elections which are currently underway are the first since 1971 that the ruling party plans to hold on national security  the most important elements of which are issues involving Pakistan and Afghanistan.

At present, Pakistan-India relations are going through hard times, after a temporary warming gave way to a new outbreak of hostility. The worsening of bilateral relations was triggered yet again by the conflict in Kashmir  and was provoked by a terrorist act that occurred in the Pulvam district of the Indian state of Jammu and Kashmir on February 14, 2019. A police motorcade was attacked by a car with explosives on the Jammu-Srinagar Highway . The explosion killed the suicide bomber and 44 employees of the Indian Police Central Reserve Forces and was followed by a series of clashes that occurred on the border from February 26 to March 5.

Nevertheless, Nandan Unnikrishnan has no intention of over-dramatizing the situation. After the two parties have passed a test for endurance, they are in for yet another spell of the easing of tensions, which makes it possible that the number of contacts with Islamabad could increase following the parliamentary electioins.

As for the situation involving Afghanistan it is much more complicated. Nandan Unnikrishnan made it clear that India is interested in securing a lasting peace in Afghanistan. What New Delhi is worried about is that Afghanistan provides its territory for the training of extremists that are then dispatched to Kashmir. India’s political leadership cannot turn a blind eye to the long-standing ties between the Pakistani special services and the Taliban movement. According to the expert, the United States has long established contacts with the Taliban and does not care what will happen in the region after it leaves. But India wants security guarantees and it wants the Taliban to curtail their armed activity in the AfPak zone. Unless they do so, it will make no sense to try to legalize underground contacts with them that have been made by Washington and Moscow bypassing the government in Kabul.