Militarization of the South Pacific: the Sino-Australian Rising Rivalry in the Region 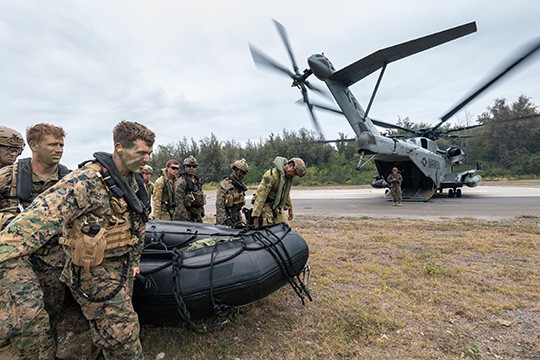 The South Pacific has become one of the critical areas of competition between Australia and China. Nowadays, Canberra tries to sign a security deal with Papua New Guinea (PNG), the largest and most populous country in Oceania. Such ambitions were a response to the PRC's intensified cooperation with the Solomon Islands. The rivalry for Oceania is shifting into a new, sharper phase, and provokes its militarization.

Transformation of the Regional Architecture in the South Pacific

Australia's ministers and the media are trying to promote the defense agenda in Oceania in every possible way. First, the Foreign Minister of the Fifth Continent Penny Wong discussed with her counterpart from PNG Justin Tkachenko the possibility of signing a security agreement between the two states[1]. Then, Australia's Defense Minister Richard Marles said that the idea to strengthen ties came from Port Moresby[2]. The attempts to present the current situation in this light raises questions in the expert community.

The fact is that the security deal actually provokes significant structural changes in Oceania, as well as the militarization of vast space of the globe. If the agreement between China and the Solomon Islands has become a extension of closer economic cooperation between the two countries, as well as Honiara's attempts to stabilize the domestic political situation, then Canberra's actions are reactive and caused by rivalry with Beijing.

It's important to understand that the South Pacific is not only exotic landscapes, but also Small Island Developing States (SIDS) that are susceptible to the effects of climate change and are struggling with socio-economic challenges. This is especially true against the background of the economic damage caused to the region by the COVID-19 pandemic.

Oceania's Past and Present: Different Visions of Larger and Smaller Actors

Contrary to the needs of Oceanian countries, their home is once again turning into an arena of rivalry between larger regional and extra-regional actors. Even in the last third of the 19th century, Australia provided London with recommendations on the need to annex the territories of New Guinea, New Britain, New Ireland, Bougainville, Solomon Islands, New Hebrides, Marshall Islands, etc. and make them part of the British Empire. Such aspirations were caused by ensuring the safety of sea routes from Sydney, as well as the future "to the tranquility and peace of the Australian colonies"[3]. In fact, larger actors desired to "reserve" this vast region and pursued its own interests, which subsequently turned into many years of colonialism for the South Pacific.

Status quo changes in the 21st century has again forced Australia and its allies to focus on the defence dimension in Oceania. Except that the situation there has changed significantly over the decades. SIDS gained independence and established the Pacific Islands Forum (PIF), which became the voice of the region. Oceanian actors are trying to build their security in some ways differently than larger players. For them, the key to stability is the well-being of the population, the preservation of cultural values, nature, economic development and the fight against climate change. For comparison, in the 2050 Strategy for the Blue Pacific Continent, the term "defense" is mentioned only once, while the word "peace" meets at least 19 times, "cooperation" — 24 times, and the "climate change" — 33 times.

There is also a growing demand among SIDS for more diversified foreign policy ties. China is a leading trading partner for many of them, and one of the key donors of aid, along with Australia, New Zealand and the United States. Pacific Islands are aimed at building a long-term development strategy, which, confessedly, is practically impossible without China. Beijing is the gateway to Asia for Oceanian countries, while Canberra is unlikely to be able to provide the same scale of economic benefits itself.

Possible Implications of the Security Deal Between Australia and PNG

It's still unknown what Canberra's attempts to conclude a security agreement with Papua New Guinea will cause. Details related to this initiative remain behind the doors of the offices of local officials. Nevertheless, it can already be assumed that strengthening defence ties will result in joint exercises, reconstruction or building of military bases, as well as the exchange of personnel. It's possible that under the occasion of protection from the effects of natural disasters, Australia will rush to base its soldiers in PNG.

For example, Canberra with the Washington's support has been working on the reconstruction of the Lombrum Naval Base on the PNG's Manus Island for several years. This facility was used by the United States and its allies as a place of deployment of ships, aircraft and military personnel during the World War II. Then the base passed to the Royal Australian Air Force under the name HMAS Tarangau and in 1974 was handed over to the use of PNG. Over time, the condition of the pier and additional facilities on Manus Island deteriorated, and it was decided to modernize it for the modern generation of military equipment.

It's important to highlight that Manus Island itself has a number of advantages, including its strategically favorable location, relative proximity to the South China Sea (SCS), as well as a convenient natural harbor. Momote Airport also serves the island, which can be supplemented by aviation. Nowadays, the naval base on Manus Island will allow Australia and the United States to use it to deploy their warships and thereby strengthen their strategic positions in the South Pacific and on the approaches to the SCS.

Based on Australia's actions, its other potential infrastructure "aims" should be noted. These may include the ports of the Milne Bay Province or Wewak town. Given the proximity of the Torres Strait to Australia — the shortest route to PNG — Canberra probably keeps in mind the importance of these territories.

When analyzing what is happening in Oceania, experts often pay more attention to the vision of larger actors, but not to the worries of SIDS themselves. Against this background, the question arises: "Who exactly needs the militarization of the region?".  The situation with the security deal between Australia and PNG may be an answer.

For example, Oceanian countries follows the foreign policy principle of 'Friends to all, enemies to none'. This implies mutually beneficial cooperation not only with Australia, New Zealand or the U.S., but also with other actors of the broader Asia-Pacific.

So far, statements about a potential deal have been made only by a new PNG Foreign Minister Justin Tkachenko his Australian counterpart Penny Wong and Defense Minister Richard Marles. It is possible that the reaction from PNG Prime Minister James Marape on this issue will be more restrained.

Wong nevertheless admitted that the issue of the agreement is still at a "very early stage"[4]. However, discussions on a security deal may put pressure on Oceanian countries. In fact, they are being forced to "choose sides" in the Australia-China or the US-China confrontation, which only complicates the geostrategic environment for Pacific Islands.

Some experts also pay attention to the biography of the new PNG Minister for Foreign Affairs. Justin Tkachenko has been holding high positions in the Government of Papua New Guinea for several years, but according to open sources, he was born in Australia and lived in Melbourne for some time, where he received an education, and then moved to PNG. In the context of the growing rivalry of middle and great powers for leading positions in Oceania, the statements of a politician associated with the Fifth Continent may be perceived controversially. Especially if they relate to the choice of the country's foreign policy course.

A Fateful Moment for the South Pacific

It is no secret that Pacific Islands expect cooperation based on mutual respect, understanding and trust from dialogue partners. However, there's still a visa regime between Australia and PNG, and China, located thousands of kilometers from Papua New Guinea, imports more products from it than the Fifth Continent. However, the new Australia's government raised the issue of a security deal just a few months after its election.

Nowadays, Oceania has faced at least two different strategies for building ties. China offers to Pacific Islands a "business model" of cooperation based on economic and business interaction, while Australia is guided by the rights of the long-standing leader of the South Pacific and sometimes decides to use a more "forceful" scenario. Proof of this was recently the establishment of the AUKUS alliance. Of course, Canberra has made a significant contribution to the development of the region, has accumulated tremendous experience in implementing humanitarian initiatives in Oceania, but the "ghost" of colonial ambitions still follows on its heels.