Kate Fowle, chief curator at Garage Museum of Contemporary Art: "We’ve been the first to create these bridges…" 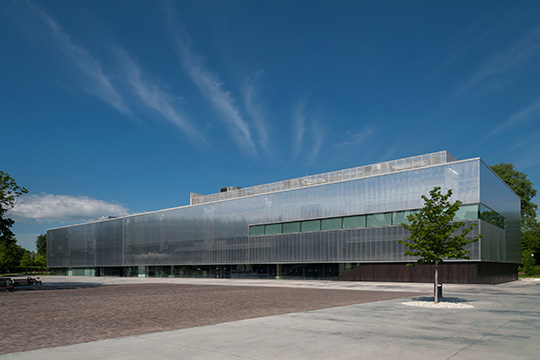 This summer, Garage Museum of Contemporary Art celebrates its 10th anniversary. Today the museum is a symbol of changes in Moscow’s cultural life and a landmark on the international map of contemporary art. But there were many stages on this way – from opening of the Center of Contemporary Art (the initial title of the future museum) in 2008 in the former building of Bakhmetyevsky bus garage that had given the name to museum, to moving to its first permanent home in Gorky Park, in 2015. The former restaurant Vremena Goda ("Seasons of the Year"), turned into a cutting edge Rem Koolhaas-designed building, became the new home to the museum. Garage has constantly transformed the accepted idea of what a museum can and should be today, demonstrating on a daily basis that a contemporary institution is not simply a space for art, but a place where every visitor can have new experiences.

Since 2008 the museum organized and hosted over 150 exhibitions -- from small research projects to large-scale international shows. It has been one of the key missions of Garage to show in Russia big international artists such as Mark Rothko, Marina Abramovich, Louise Bourgeois, James Terrell, Takashi Murakami and many others. More than 3.5 million people visited Garage during the past 10 years. In the first year the number of visitors did not exceed 10 thousand; by 2017 the attendance hit a record figure of 717. 000 visitors.

Since 2013 Kate Fowle, chief curator at Garage Museum of Contemporary Art in Moscow and director-at-large at Independent Curators International (ICI) in New York, has been in charge of the of the museum curatorial team and exhibition programming. She has successfully worked in the East and in the West. Previously she was the international curator at the Ullens Center for Contemporary Art in Beijing and chair of the Master’s Program in Curatorial Practice, for California College of the Arts. During her visit to Moscow our observer Elena Rubinova spoke to Kate Fowle about the role of Garage museum for Russia’s presence on the international art scene, about collaborations with major museums and what she took as her main achievements and contributions during her work in Russia.

What is the international role of the Garage Museum as an institution and how is it perceived outside Russia?

I think that first I would like to say a few words about the recent past. In the last five years that I have been here, one of the most important factors has been to try and find the way of translating – not in terms of the English language translating Russian to English, but translating culture. So, as important as it has actually been to bring international artists to work in Russia, it has been about how to communicate what is happening in Russia. And it’s not necessarily about only making exhibitions, but through publications, discussions, debates -- being kind of ambassador, if you like. Trying to explain to people different ways of perceiving how sensibilities work, what the priorities are, what the passions are. We all know what kind of propaganda comes out in the Western press and overshadows a lot of positive things and things that are a lot more nuanced than the press would want them to be. Moving forward, what is really important is this integration between Russian art community and international art community. One of the things that we have been doing is developing collaborations with large-scale museums around the world. It’s hugely important that you develop exhibitions that appear and travel to other places round the world, but it’s equally important that we receive the exhibitions that have been developed by other institutions here.

What are the latest examples of such successful collaborations? I assume, you have had many over the years.

True, it’s hard to enumerate all… For instance, our most recent project produced in partnership with the Museum of Modern Artin Warsaw presented The Other Trans-Atlantic, the first major exhibition in the country of kinetic and op art from Eastern Europe and Latin America; previously we had worked very closely with Haus der Kunstin Munich bringing to Moscow Structures of Existence, the first comprehensive survey of Louise Bourgeois’ work. For the past year and a half, we have been collaborating with Van Abbemuseum, Eindhoven…But collaboration also means providing opportunities that expand, so it’s not just taking what has been everywhere else, but also the way of working with other museums to get new things done… Garage is increasingly active abroad and at different levels. A couple of years ago we have launched the Russian Art Archive Network with the Zimmerli Art Museum at Rutgers University in the United States and with the University of Bremen in Germany, both of which have significant Soviet and Russian art and archival collections. Another example is a very recent and that is participation of Garage director Anton Belov in the fourth Global Museum Leaders Colloquium in the Metropolitan Museum in April 2018 - he was invited to be one of thirteen directors from around the world for an international dialogue about museum management.

When Garage started here in Russia there was no Kunsthalle type of museum, so it was necessary to establish first and then develop, wasn’t it? Looking into retrospective, how has the role of Garage changed and where did it put Russia on the international art map?

It was basically increasingly understood that it needed to be a venue that had a professional expertise and the capacity to be able to collaborate on the international level – something that a number of years ago was a lot more difficult. Of course, there has always been Pushkin Museum of Fine Arts, Tretyakov Gallery, but they are now on a federal level, a different kind of institution. We were the first, but we will not be the last, because V-A-C is opening and the state museums are expanding their international activity. We were the first to create these bridges that enable Garage be a place in Moscow that can be part of an international dialogue.

What do you cherish most as your own achievement as a chief curator during these years?

I would say that there were two things that have been really important in terms of my personal contribution. The first is that when I arrived there was no system in place and the curatorial team was very small. So, it has been training and development, building a team that has knowledge, expertize and capacity to continue international conversations. And the second thing was working with artists. Every project that we have done has been not that they have just fly in, bring objects or paintings, put on the wall and disappear again. Each artist is engaged very closely with things that are happening here: it means creating a better understanding of this place and giving people the opportunity to develop new ideas and new projects.  There are many artists with whom we worked with us in this format and have create projects that have taken their practice slightly into a different direction and expand the idea that had. It might not been a direct influence of the place on art, but the opportunity Garage had given to them. It’s a testing ground for experimentation and new ideas. I could name Rashid Johnson with his epic plant-filled installationWithin Our Gates (2016), or almost three years long project by Taryn Simon who was working “live” to provide audiences with unprecedented access to her singular research processes. This fall a French artist of Albanian decent Anri Sala and Mexican artist Damian Ortega will develop their installations for Garage Atrium and Garage square respectively.

How important is it to build these cultural bridges especially when political climate is not terribly good?

I do not think that culture should be tasked with having to resolve social and political issues – that's not the responsibility of culture, but I think that there are different dialogues that could develop through the kinds of conversations that artists have. Museums are interested in cooperation, especially at such moments when political climate is not so good. Cultural bridges must be built as quickly and solidly as possible so that people continue communication. It opens things up in the way that's different. And Garage museum is the place where art and ideas make history.