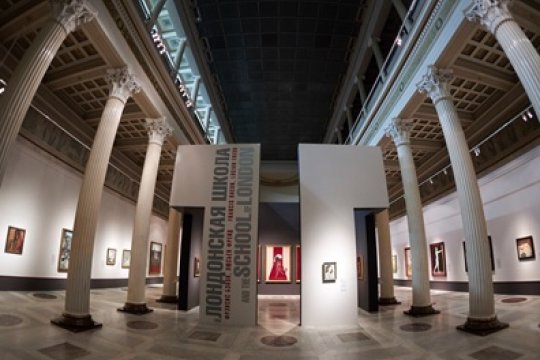 The exhibition “Francis Bacon, Lucian Freud and the School of London’’ that opened at the Pushkin Museum of Fine Arts in Moscow last week, has all chances to become a serious crowd-puller. For the first time, the Russian public has an opportunity to get acquainted with a unique and very important chapter in the history of modern British art. Despite the worldwide fame of most of the masters, whose names are usually associated with the so-called London School, monographs of Francis Bacon were held in Russia, but only occasionally single works by Lucian Freud, Frank Auerbach, Leon Kossoff were exhibited. The current exhibition is to bridge this gap. 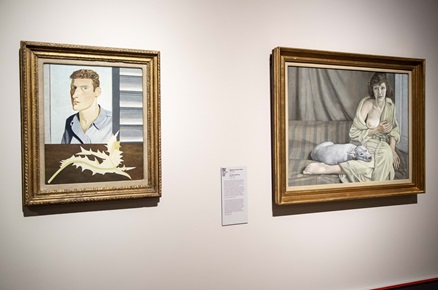 The project is a continuation of the Pushkin Museum’s successful history of collaboration with the Tate Gallery, which has included a number of large-scale projects. “Tate has enjoyed a longpartnership with the Pushkin Fine Arts Museum – in partnership we have presented Turner here, William Blake and Pre-Raphaelites, but this is the first time we partner with the exhibition of the 20th century British art “, said Alex Farquharson, Director of Tate Britain, at the opening ceremony. For the exhibition that started its travel in summer of 2016 and has been successfully shown in London, Los Angeles, Malaga and Aarhus, it took a long time to get to a Russian viewer. Marina Loshak, Director of the Pushkin Museum of Fine Arts, said that bringing this exhibition to Moscow had been her long-time aspiration but it took a lot of efforts to implement the plan. 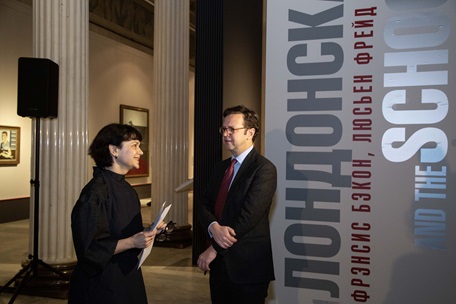 Alex Farquharson and Marina Loshak at the opening ceremony

“Back in 2015 when I became the museum director, my first business trip was to the UK where we discussed the list possible exhibitions with the colleagues from the Tate Gallery. When asked what I would favour, I chose the School of London because it spoke about a human existence, no matter when or where. This year we have called a Year of Britain for our museum and decided to start and finish it with the two shows connected with this country – opening it with the School of London exhibition and finishing with Gainsborough. It’s necessary to emphasize that everything we do in the museum is based on the energy and good will of the people involved from both sides and that’s why it’s more than important for me to say the words of gratitude.“ 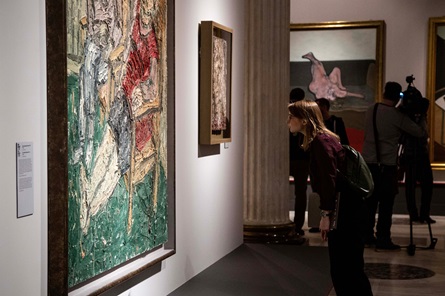 Public at the exhibition opening 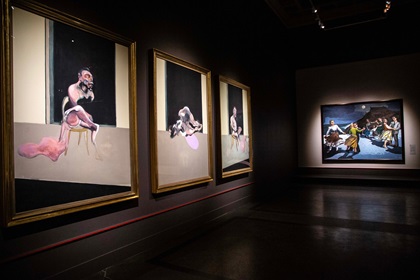 The term” School of London” coined by one of the artists - R.B. Kitaj - in 1976 was somewhat contradictory. It has often been applied to a small group of six painters: F. Auerbach, F. Bacon, R.B. Kitaj, Leon Kossoff, Lucian Freud, and Michael Andrews, but art historians as well as artists involved, including the group name creator, often criticized it (R.B. Kitaj defined his fellow artists as ‘a herd of loners’). There was no unifying manifesto or credo drawing these painters together. “The School of London was not the school in the tradition sense, but all of the artists wanted not just to paint reality, but to remake it. All of them were deeply connected either through friendship, through teaching or developing their work with one another in London at the same time”, underlined Elena Crippa, curator of Modern and Contemporary British Art at Tate Britain.

They mostly probed autobiographical subjects, including portraits and settings of friends and intimates, and focused on the human body as a subject matter of their art. One of the supporting pillars of the show is the timeless art of Lucian Freud, the grandson of neurologist Sigmund Freud. Lucian Freud’s characteristic skill – his meticulous faithfulness in the psychologically charged portraits of his models – earned him the title of ‘the Ingres of Existentialism’. In his long and prolific career, the painter created depictions of his near and dear ones in profoundly sensual ways. In some portraits, such as the one that depicts his wife Kitty with their dog, he often juxtaposes fur and skin. 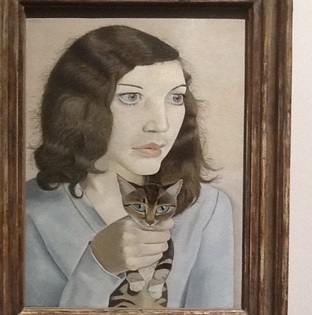 Along with the appeal to the human body the artists of the School of London also focused on the landscape genre shifting their focus towards the demolished London cityscape. “An overwhelming subject is a human figure in isolation indoors. Nevertheless, we have some sense, particularly in the works by Auerbach and Kossoff, of London – a sort of a wounded land from the war period”, Alex Farquharson continued in his inauguration speech at the Pushkin Museum. No matter what is being depicted - a post-war London under renovation, a swimming pool in the neighbourhood or Camden Town area next to Auerbach’s studio in the north of the city - the images created are connected with personal stories and the subjective perception of the city. In the metaphorical sense they turn out to be a kind of existential self-portraits of their authors. Sculpture-like, heavily-layered urban paintings by living members Frank Auerbach and Leon Kossoff, receive a prominent place at the exhibition. 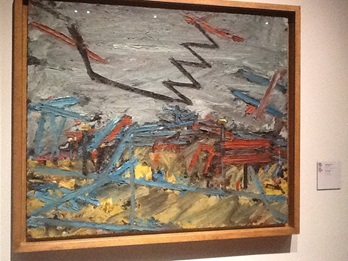 Speaking of the painting methods and artistic means used by the London School artists to express a deeply personal and intense experience of life, Elena Crippa said: “The way these artists developed their painterly technique is such that we very much have the sense of a feeling of touch on the surface. And in the intimate quality of the subject the exhibition very much speaks of me and you.” 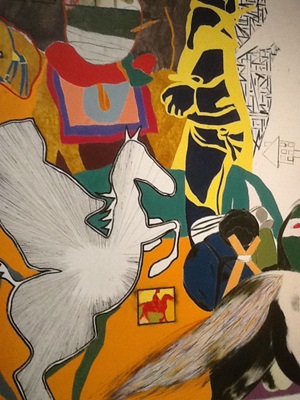 The images created by Michael Andrews and R. B. Kitaj feature literary characters and were often inspired by photographs and works by other artists. Some collages by R. B. Kitaj could appeal to the Russian audience because the artist used a lot of historic and literary references to the Soviet and Jewish history and culture, paying tribute to his Russian-Jewish roots.

As the curators emphasized, a beautiful exhibition design by Anna Kamenskih changed the interior of the museum’s spaces, making the most of the incredible nature of the Pushkin Museum building. As London guests mentioned at the exhibition opening, a different hang of the exhibits made the show in Moscow even better exposed than in some other previous locations.  Along with the show, a series of discussions and other events featuring Russian and British scholars who are experts in visual arts, poetry, philosophy, and social anthropology will be held at the museum.

Images: courtesy of the Pushkin Museum of Fine Art Press-department and E. Rubinova