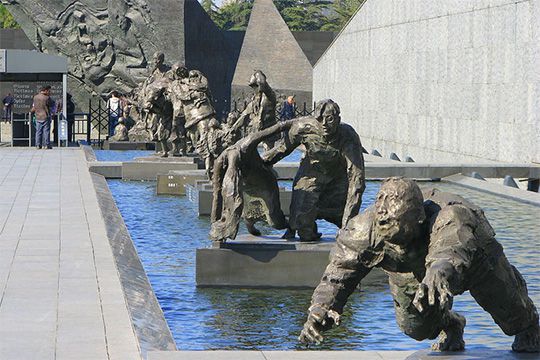 On December 15, China was marking the 80th anniversary of the Nanjing massacre by Japanese troops.

In Japan, they avoid using the term “massacre,” however, so when covering the tragic event the local media referred to it as the “Nanjing incident." [1]

In December 1937, at the height of the second Sino-Japanese war, Japanese forces entered the city of Nanjing, then the capital of Nationalist China, which had been used by the Kuomintang government as its headquarters since 1927. The Chiang Kai-shek government had earlier decided to move the bulk of its forces out of the city, leaving behind just a small garrison. All that time, the citizens were kept in the dark about those plans. Moreover, they were prevented from escaping, even though there still was plenty of time to evacuate the civilian population. As to the Japanese, in Nanjing they didn’t encounter the serious resistance they had faced in the battle for Shanghai.  And still, in addition to mass-scale looting and torching of houses, they staged a real bloodbath killing thousands of unarmed city residents and POWs. Judging by numerous accounts of that massacre, including by a handful of Europeans who remained in the city and were spared by the Japanese, who agreed to place them in a special “safety zone,” it seems that the city was being overrun not by soldiers but a giant crowd of characters from American movies about sadistic serial killers. The elaborate torture and murder of pregnant Chinese women was especially shocking.

The reasons for such behavior by the Japanese military still defy a clear explanation. One thing is clear, though: Japanese militarism as a phenomenon is characterized by the complete loss by politicians of control over the military and of officials closely associated with it. That being said, senior officers, unlike the "field generals," were often unable to prevent the atrocities committed by the lower ranks that quickly became widespread. Unlike in the Navy, the system of personnel training in the Imperial Army allowed uneducated conscripts from peasant families to rise to the rank of officers. A chance to feel oneself as part of the "military caste" and traditions of the samurai, which their ancestors could not even dream of, might be a reason why many of those new officers began to "revel" in their own power. At the same time, medieval customs, like testing the sword’s sharpness on unarmed people, and ritual cannibalism were coming back. Japanese newspapers of that period wrote about two officers in Nanjing who competed who of them would chop off more heads, thus executing hundreds of people.

It was not until the close of World War II that the events in Nanjing attracted international attention, as even the Kuomintang propaganda had been keeping mum about it. The Japanese militarists committed countless other crimes, but for them the Nanjing massacre carried a special meaning, not because of the number of victims, but because of the reputational risks it posed for the imperial family, since one of their members (Prince Yasuhiko of the Asaka clan) was the one who personally supervised the capture of Nanjing. After the war he was not put on trial and enjoyed immunity granted to members of the imperial family, with the full consent by the US occupation authorities.

In 1948, the case of the Nanjing massacre was considered by the International Military Tribunal for the Far East, which handed down two death sentences. The tribunal determined that more than 200,000 people were killed in Nanjing. A year before that a series of “smaller courts” held in China, including in Nanjing, put the death toll at 300,000.

In post-war Japan, the "Nanjing Incident" remains a much-disputed issue giving rise to all sorts of conspiracy theories concerning not only the historical past, but also present-day relations between Japan and China.

These include attempts by the so-called "revisionists" to question both the methods of counting the victims (with just 40,000 mentioned as the lower limit) and the very fact of the Nanjing killings.

Meanwhile, a movement that emerged in Japan during the Cold War period, led by representatives of the country’s academic community, people of the arts and members of the teachers union, challenged the way historical facts, including the Nanjing massacre, were presented in school textbooks.  However, their activities started to die out during the 1990s, when the  nationalists, opposed to the “masochistic view” of history, began to play a bigger role in Japanese politics. [2]

The famous Japanese writer Haruki Murakami took a lot of angry flak from the extreme right-wingers when in one of his books, published in 2017, he had one of the characters reflecting on the question about “the difference between 100,000 and 400,000” of people killed.

Getting back to the present, there is one question that is begging for an answer. Tokyo’s policy towards China was one of the biggest achievements of Prime Minister Shinzo Abe, who stepped down in September 2020. Amid a  deep crisis that Japanese-Chinese relations found themselves in in 2012, due to the inability of the Democratic Party, which was in power before him, to stand up to the nationalists’ populist actions, during his eight-year premiership Shinzo Abe managed if not to make them friendly, then at least to restore "normality." Moreover, in solving this difficult task, he neither made any concessions on key issues for Tokyo, nor irritated Washington, which had its own plans for Beijing. At the same time, Shinzo Abe continues to be viewed in East Asia and also in the West as a "hawk," whose statements and even some symbolic gestures clearly smack of revisionism. On one occasion, for example, he was photographed at the controls of a Japanese-designed fighter with “731” painted on its fuselage, evoking clear associations with the Japanese Unit 731, which was testing bacteriological weapons on humans in Manchuria. In 2013, Abe visited the Yasukuni Shrine, drawing negative reaction not only from Japan’s regional neighbors, but also from Washington. How come a politician with such views was able to "make friends" with China?

There is a circumstance here that has not been lost on the Japanese media.  Since 2018, [Chinese President] Xi Jinping has not attended events marking the anniversaries of the Nanjing tragedy, although it was he who in 2014 proposed to mark the Day of Remembrance for the Victims of the Nanjing Massacre. This time round he did not show up either for the December 15 event (due to the pandemic, as was officially explained). On December 13, Japan’s state broadcaster NHK reported that amid a further deepening of its confrontation with the United States, China intends to demonstrate its interest in strengthening ties, primarily economic ones, with Japan. Therefore, the mourning ceremony was organized so as not to harm the current status of Sino-Japanese relations. [3]

However, the gradual "unfreezing" of relations between the two countries began long before Donald Trump declared a sanctions war on China. It was Shinzo Abe who, speaking in parliament back in 2014, invited Beijing to resume the dialogue between the two countries’ leaders. In that same year, a group of prominent Japanese politicians, among them the former Prime Minister Yasuo Fukuda, paid a visit to China. When Fukuda’s father, Takeo, was prime minister during the late 1970s, Japan signed the Treaty of Peace and Friendship with China, and his surname has since been a symbol of a "reset" in bilateral relations. This time the elderly politician was once again used as a "fire engine." In the same year, Shinzo Abe and Xi Jinping met on the sidelines of the APEC summit in Beijing, and their meeting in Hangzhou, China, during the September 2016 G20 summit is now seen as the beginning of the active phase of mending fences between the two nations.

During the Trump presidency, this process only accelerated, much to the benefit of both Beijing and Tokyo, each of which had serious problems in relations with Washington. Notably, as the Sino-Japanese Treaty of Peace and Friendship was signed in 1978, each year ending with “8” could bring new headways in bilateral ties. This tradition is especially important for China, where ceremony plays such a big role in politics. During Shinzo Abe’s first visit to Beijing in October 2018, the sides agreed to launch over 50 infrastructure cooperation projects, which experts were quick to hail as the dawn of a new era in Japanese-Chinese relations. In fact, many of these joint projects later turned out to be just for show, and were subsequently shelved. Still, when Shinzo Abe met his Chinese counterpart at the 2019 G20 summit in Osaka, they agreed that Xi Jinping would pay an official visit to Japan in the spring of 2020, but the visit was postponed due to the pandemic. The epidemic could also have been the reason why Xi Jinping refrained from attending this year’s memorial event in Nanjing.

As for Shinzo Abe's revisionist views, they are probably seen in Beijing as mainly intended for domestic consumption, in contrast to the pro-American nationalism of another charismatic Japanese politician, former Prime Minister Junichiro Koizumi. Unlike Koizumi, Shinzo Abe was more of a “nationalist-pragmatist,” focused on solving problems pertaining to the national interests of Japan. [4]

During his first news conference after taking office, Japan’s new Prime Minister, Yoshihide Suga, said that he would like to build stable relations with neighboring countries, including China and Russia. [5] Still, chances are high that the subject of the Nanjing massacre may return to the bilateral agenda since the age-old traditions of historical memory will not let the onetime foes forget this tragic event.