YALTA 1945: A. A. Gromyko concerning reparations in favor of the USSR 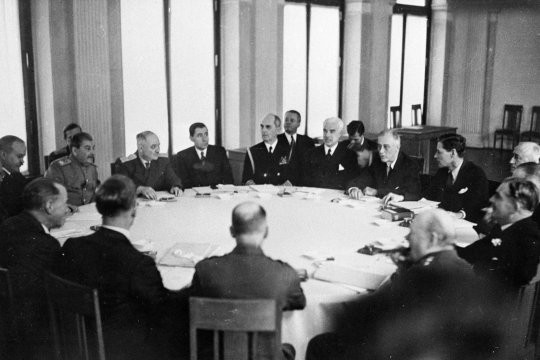 "Three historical personalities - Stalin, Roosevelt and Churchill - together they had then colossal power and enormous influence. How much more could have been solved if they had then reached the necessary consent degree on all matters, and if justice had completely triumphed!", - A. A. Gromyko, the Yalta Conference participant writes in his memories.

"Not all the issues it was reached the agreement upon then. One of them – regarding German reparations in favor of the USSR – remained unsettled. Moreover, the participants’ positions on it diverged radically.

Stalin and all of us Soviet representatives asked ourselves what the American President, and, especially, the British Prime Minister, were thinking about when that question was discussed. Did they know that even if an agreement had been reached to pay the Soviet Union $ 20 or $ 30 billion, even then it would have meant compensation for a tiny fraction of the direct damage inflicted by Fascist Germany on our country? Later, such direct damage was estimated at 2,600 billion rubles. Yes, they knew it, they were aware of it."

It must be said that the official number reflecting the material damage inflicted on the Soviet Union during the war years, was 2569 billion rubles. In the essence, we are talking about the loss of a third of the entire national wealth. 1710 cities, more than 70 thousand hamlets and villages, and about 32 thousand industrial enterprises were destroyed.

According to the Yalta Conference decisions, during the five post-war years, reparations in favor of the USSR were amounting to only 10% of industrial capital equipment in the Germany eastern zone without any compensation. However, German enterprises and gold in the US-British occupation zone did not fall under reparations, and vice versa. During the five post-war years, in exchange for goods, products and other materials, the USSR could count on 15% of the enterprises capital equipment located in the western occupation zone.

It should be noted that the production facilities in the western zones for the most part remained unaffected by the war, so the widely advertised effectiveness of the Allied bombing of German enterprises, which allegedly have depleted the "industry" of Germany, was fairly exaggerated. It's needed also to keep in mind that the western part of Germany in its total potential was more than 2 times higher than the corresponding potential of its eastern part.

But let's return to the memories of A. A. Gromyko:

"The whole point is that our allies thought out a different line in this matter and acted in accordance with it. And its meaning was precisely to prevent the Soviet economy, which had been cruelly damaged in the war, from recovering quickly.

When the meeting participants were already leaving the meeting room, Stalin, rising from his chair, said in a low voice, as if to himself:

- It is not excluded that the US and England have distributed the roles among themselves.

In the subsequent - at a conference in Potsdam - the validity of this assumption was confirmed. There, not only the British, but also the Americans did not want to discuss the issue of reparations seriously. The Soviet Union then met resistance from the side of both powers. In such joint position, tough Churchill's approach shown in the Crimea found its reflection.

Churchill's point of view was also taken on the armament by the Labour government that came to power in England during the Potsdam Conference. By the way, before that, the Labor leaders – Attlee and Bevin – pronounced a lot of kind words to the Soviet Union, talked about the death of its people and the material losses it suffered in the war. And in Potsdam, they – the new Prime Minister and Foreign Minister of England – were more than stingy with such words. The lexicon was becoming different. The cold winds have already blown, and they have reached Potsdam.*

The estimates submitted by the special commission "Galbraith", which was responsible for the survey of industrial capacities in the western zones, testify that Germany was able to pay reparations to the Soviet Union in the amount stipulated by the Yalta Agreement. However, the beginning "Cold" war made its own adjustments. Already at the Potsdam Conference, only 10% of the total possible reparations fund was allocated to the Soviet Union. Soviet representatives were restricted access to industrial facilities in the western zone, so, only 8% of their total capacities of 1936 it was managed to export from the western lands to the USSR. The arrangements of the Potsdam Agreement that the USSR was to receive 25% of the industrial equipment from these zones, mainly the military-industrial complex of Germany, were not fulfilled.

It is also worth noting that the Soviet government adhered to the principle of partial compensation, in order not to cause irreparable damage to the defeated countries peaceful economy: foreign assets and part of industrial products were seized, and, mostly, the military enterprises equipment was to dismantling and export. Nevertheless, the reparation amounts was, for example, 9% of the country's budget in East Germany, which, according to some estimates, became the reason that provoked the so-called "Berlin crisis" of 1953.

Reparative supplies have played a significant role in the development of the USSR military-industrial complex, as well as in such industries as radio equipment, the production of artificial fibers, petrochemicals and synthetic rubber, as well as in the field of communications, metallurgical equipment, the production of diesel engines, etc. Along with that, reparations have not played a significant role in the restoration of civilian industries that were damaged during the war. And, although in a whole number of industries reparations have served as an incentive to the development of technologies and technological progress, their volume have amounted to no more than 8% of the direct damage to the USSR.