Unknown Qatar on View at the Russian Museum of Ethnography 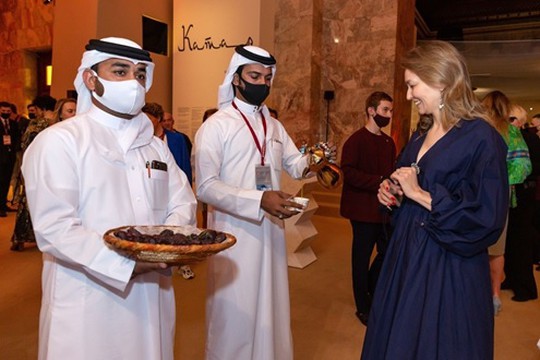 The exhibition «Qatar Between Land and Sea. Through Arts and Heritage» opened on June 5 at the Russian Museum of Ethnography located in the very center of Saint Petersburg. One of the oldest ethnographic museums in the country became the main platform for international cultural dialogue. The exhibition was the central but by no means the only event of the extensive cultural programme of the State of Qatar, the guest country of the XXIV St. Petersburg International Economic Forum. An intense business agenda at the forum was complimented by the music festival Mehaweb and Qatar Film Days Festival showcasing contemporary cinema of the Middle East and North Africa for the Russian audience. 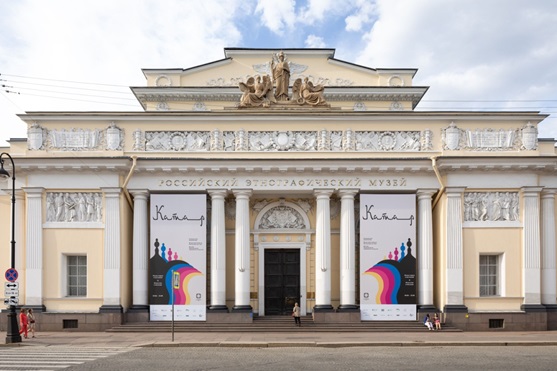 The Russian Museum of Ethnography in Saint Petersburg

However, it is precisely the exhibition on the display in the Marble Hall of the museum holds a special significance for Qatar, the country between land and sea, and at the crossroads between West and East.

Qatar's programmes in the world are known to highlight its historical heritage and traditions: cherishing its cultural legacy this Arab country is convinced that heritage is not only the spirit of the past, but also the present and even the future. 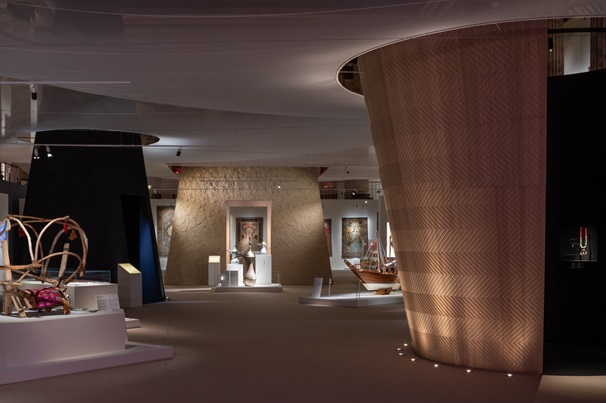 The general view of the museum Marble Hall

Qatar and Russia started an active cultural dialogue back in 2018 from a series of loud and large-scale events during the cross-year of culture. The Year of Culture has laid a strong foundation for cultural, tourism and economic ties between the two states, and the current impressive Qatari cultural programme as a guest country at SPIEF is the culmination of a new phase in bilateral relations. 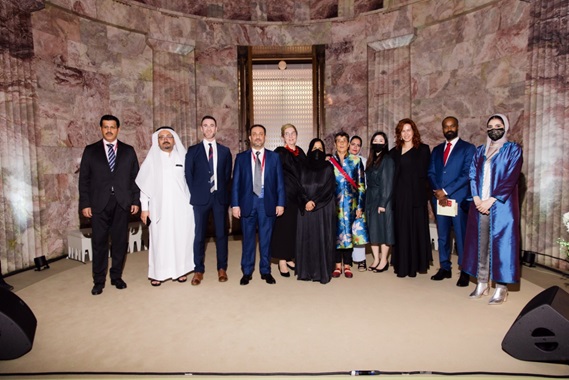 The team of exhibition organizers at the opening

"The exhibition, created by a team of international specialists, reveals the multifaceted nature of Qatari culture. It explores so many facets of Qatari society showing how relevant and important traditions are today. Without them, one cannot build a modern society," said Yulia Kupina, Director of the Russian Museum of Ethnography, in her opening speech. The show represents Qatari heritage through a vibrant display of material culture: it includes over 200 objects from the National Museum of Qatar, the private collection of Sheikh Faisal bin Qassim al-Thani, and the Arab Museum of Modern Art (Mathaf). Greeting the public at the opening, Claudio Cravero, Director of Sheikh Faisal Museums, explained that the main aim of the exhibition was to introduce Qatari culture to the Russian public. "The works of art within the exhibition reveal the common thread of cultures that connect communities from as far apart as North Africa, the Middle East and South Asia," – he added. 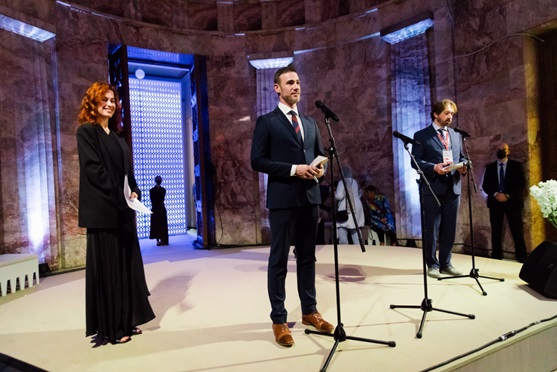 At the opening ceremony

The objects represent but a selection of Sheikh Faisal bin Qassim Al Thani’s modern version of a Cabinet of Curiosities (Kunstkamera), an eclectic type of collection personally assembled by the Sheikh. ''My collection started out as a small one, kept it in my own majlis, but when the collection began to expand, people became more interested in seeing it, especially academics such as university professors, diplomats and other prominent personalities. I therefore wanted to share my hobby and passion with people through the Museum, whose architectural design reflects the Qatari identity, and to present the artefacts in a way that reflects my vision,'' —Sheikh Faisal said in the interview to the Cultural Creative Agency (CCA) before the exhibition in Russia. 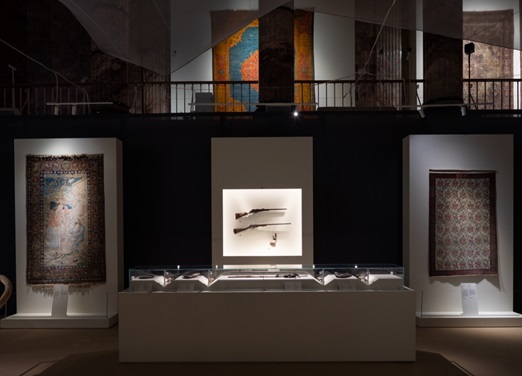 The curatorial concept is based on the desire to show the identity of Qatari culture dating back to antiquity and its place in the world. Visitors can read the country’s history through the objects that form fascinating stories. "Qatar’s confidence in civilization through culture has long proven successful advancements across many fields of human knowledge”, — says Waleed Al-Dulaimi, curator at the Sheikh Faisal Museum. Qatar is known as a country with an aesthetically subtle culture, and the ethnographic exhibition in St Petersburg, home to the Oriental studies in Russia, promises to be a real revelation both for professionals and connoisseurs of refined style and undemonstrated values alike. 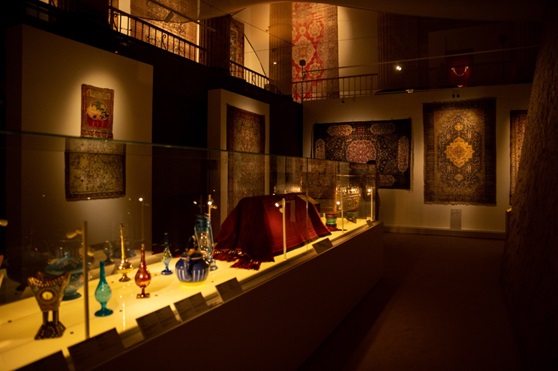 The exhibition showcases over 200 objects ranging in size and origin

The exhibition showcases objects spanning over a hundred years and ranging in features and size: from an intricately decorated glass lamp to richly inlaid chests, precious gemstones and jewellery never exhibited before out of Qatar. The objects are much more than just a collection of catalogued objects.

According to the curatorial concept artefacts are grouped by themes so that visitors can experience a wide range of major types of tangible and intangible heritage: boats, carpets and bedspreads, domestic utensils and clothing. Other traditional Qatari themes taken to the exhibition are falconry, pearl diving, and the camel.

The space at the centre of the exhibition is a cube-shaped living space where visitors are invited to immerse themselves in the contemplative atmosphere of a traditional Arab majlis, although there are also entertaining moments. 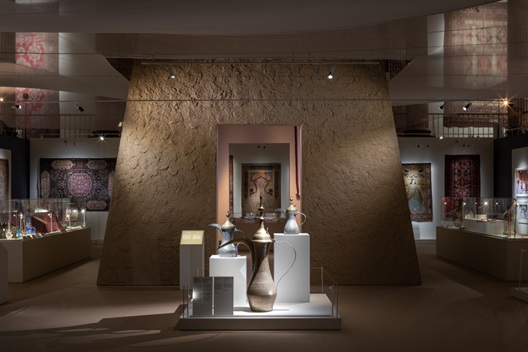 The majlis is an integral part of any Qatari house, a meeting place for communal gatherings usually located near the main entrance. It often serves as a living room where the hosts and their guests get together to be served traditional refreshments such as coffee and dates. The majlis embodies the ‘group spirit’ of Qatari families and communities, manifested through generosity and innate hospitality.

Among a broad variety of artefacts on the display are the traditional Qatari metal or copper coffee jugs called dallah, whose shape resembles a tropical bird, and small cups made of glass or ceramics used for a coffee ceremony. These objects add to the atmosphere of pleasure and comfort inherent of for the idea of hospitality.

The entire upper level of the Marble Hall features handmade carpets not only from Qatar, but also from other countries in the region. Regardless of social classes, every Qatari house includes woollen-weaved furnishings to cover their floor or use as a tapestry to isolate their walls from heat and sound. 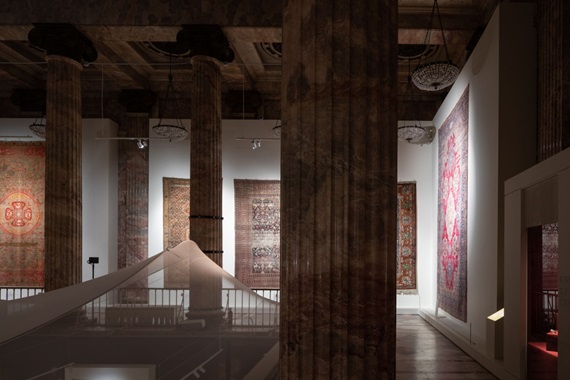 Handmade carpets are showcased on the upper level

Although elaborated carpets from Iran and Turkey are common in affluent dwellings, sadu is the traditional wool weaving practiced to make cushions, rugs, and tents. Today, only a few women know how to practice sadu, despite it is celebrated as national heritage. 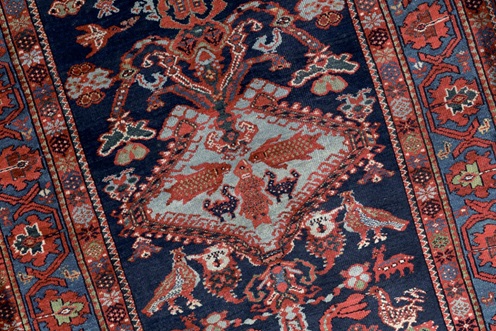 A variety of daggers, sables, knives, rifles, camel’s and horse’s saddles show the adversity of desert life. In the East, weapons have always possessed not only utilitarian value but reflected social status. Many of the exhibits attest to the high skill of craftsmen: engraving, gilding, filigree as well as stone, bone, mother-of-pearl, coral, and tortoiseshell inlay were widely used in decoration.

The section featuring life in the desert presents instruments related to falconry show how the bird of prey was treasured as its hunt for food was critical for survival. In modern Qatar, falconry has become an expensive hobby and sport for Qataris and tourists, and birds of prey that were once caught and tamed are now raised on farms. 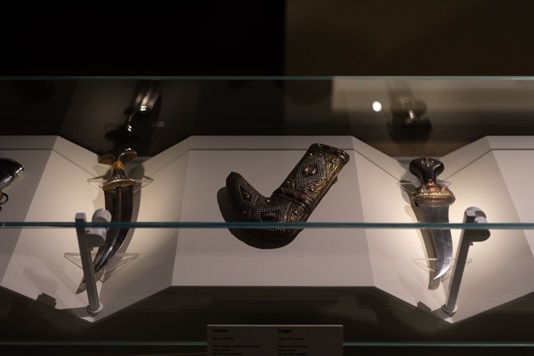 Many daggers attest to the high skill of craftsmen

No less spectacular part of the show is the section on trades connected with sea, such as fishing and pearl diving. Until the 1930s they represented most of the Qatari families’ incomes. On the display are model boats, a special stone used by divers to speed up, a knife for opening oysters' shell in search for the pearl, various tools from the 19th century when merchants measured pearls using metal sieves and weighing through the scales and stones. Some items made back then surprise us even today, such as a clip for a diver's nose made of lamb's horn. 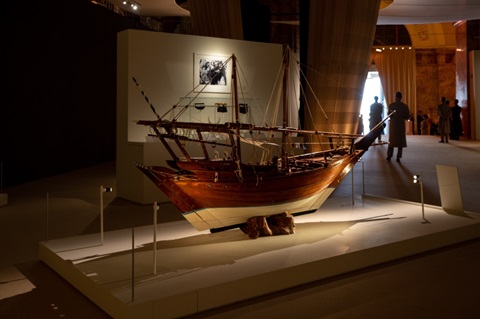 The discovery of oil brought many changes to Qatar which also brought up the question how Qatar can embrace modernity while preserving its own values, and how this affects their approach to cultural heritage. Archive photographs on the display tell the viewers about life in Qatar in the first half of the 20th century. 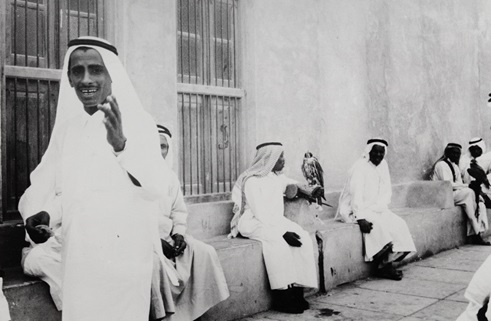 Qatar, XX century. From the collection of Sheikh Faisal Museum

In Qatar, jewellery has long represented economic and social status symbolizing beauty and power. In terms of style, a typical decor is best exemplified in jewellery. Nevertheless, jewellery culture and mastery dates back thousands of years ago in the Arabian Peninsula when metals were crafted with seashells, pearls, and stones. This section showcases traditional jewels from the late 19th to the mid-20th century. 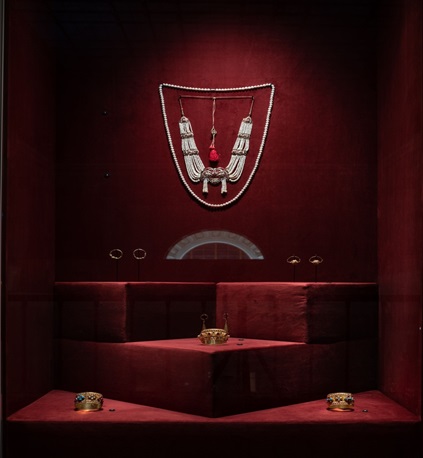 An intensive educational program that will be delivered by the leading Russian and international experts was prepared specially for the exhibition. The exhibition will be open until August, 22d.

Images: courtesy of the Сultural Creative Agency ( CCA) and press-service of the Russian Museum of Ethnography