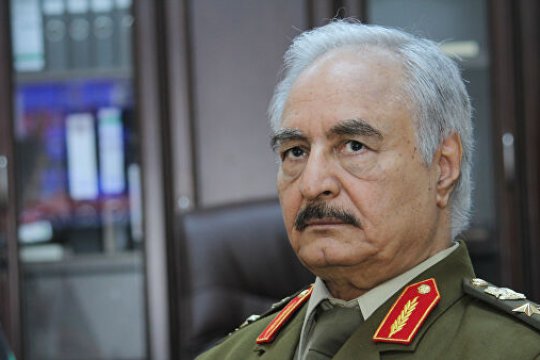 Russia's Foreign Minister Sergei Lavrov has met with heads of diplomatic missions of Arab countries and representatives of the League of Arab States (LAS). The participants in the meeting, which took place in Moscow on December 16th, focused on the situation in the world’s hottest spots, in particular, in Libya. Had the meeting taken place a month ago, Libya would likely have received no more than a mention. Now, it is in the spotlight of most of the world community.

Four days earlier,Chief Commander of the Libyan National Army (LNA), Marshal Khalifa Haftar, announced the start of a “decisive battle of Tripoli”. According to Turkish media,fighting is under way 10 km from the city center, which is under control of the Government of National Accord (GNA), led by Faez Sarraj. Although the offensive on Tripoli began in April, it has not been successful. Now the situation has changed: according to media reports, the sheikhs of the Misurata tribes - the most combat-ready part of the armed forces of the GNA (the so-called "Misurata bligades") - are ready to turn their backs on Sarraj. Such a move is attributed to the recently signed agreement on military cooperation with Turkey.

The agreement on military cooperation between Turkey and the Libyan Government of National Accord, which was signed in Istanbul on November 28, envisages the strengthening of military cooperation, in particular, the training of Libyan military personnel by Turkish instructors. Besides, the two parties signed  a memorandum of understanding on the delineation of zones in the eastern part of the Mediterranean Sea. The Haftar-controlled parliament in Tobruk deemed the memorandum illegal. So did the European Union, explaining that the document infringes on the rights of a number of Mediterranean states of united Europe.

Since the debate over the hydrocarbons lying around Cyprus has been on for a long time, we can talk about the emergence of an anti-Turkish bloc comprising the Republic of Cyprus, Saudi Arabia, the United Arab Emirates, Greece and Israel. The matter is that within the sea borders drawn by Ankara and Tripoli, there are areas where the Greeks, Israelis and Greek Cypriots plan to lay a gas pipeline to Europe. In July 2019, during a second meeting on the East Mediterranean Gas Forum in Egypt, the gas ministers of Egypt, Israel, Greece, Palestine, Cyprus, Italy and Jordan discussed the creation of a regional gas market. I think it was short-sighted that Mediterranean Turkey was not invited to the meeting.

Ankara is “pushing” for its “gas” interests in tandem with the GNA, which it supports in the inter-Libyan conflict. Fortunately, the Tripoli government relies heavily on the “Muslim Brotherhood”, which is ideologically close to the ruling in Turkey Party of Justice and Development and which makes up the backbone of the "Misurata brigades." Ankara has long been supplying Tripoli with weapons while media also report about Turkish instructors and staff working for the GNA. Last summer, Khalifa Haftar even announced a general mobilization to "repel the Turkish threat." Since then, Turkish pro-government media have referred to the LNA as "forces of coup leader Haftar." Erdogan deems the marshal "an illegal representative of Libya."

Backing Haftar, directly or indirectly, are countries with which Turkey does not have the best relations: the USA, France, Saudi Arabia, Egypt, the UAE. Turkey also suspects Russia of supporting LNA, given that  Russia views Haftar as a leader who, unlike Sarraj, is able to wipe out Islamic groups and establish a secular regime in the country. [i]

Not long ago, the Turkish president “added more fuel to the fire” announcing his readiness to send troops to Libya if there comes a request to this effect from the GNA. Although Tripoli’s official reaction to this has yet to be voiced, the supreme mufti of Libya (Sarraj’s supporter) Sadyk al-Gairani has already called on the authorities to accept Ankara’s proposal “in order to dislodge Khalif Haftar and his foreign allies from the capital.” In response, the Commander of the LNA Navy, Admiral Faraj Mahdaui, revealed Haftar’s order to sink Turkish ships if they attempted to enter the country's territorial waters.

Shortly before his high-profile statement, Recep Tayyip Erdogan invited the President of the Russian Federation to discuss the situation in Libya. He expressed hope that the Russian leader “will reconsider his attitude to Haftar.” The conversation did take place, its details are unknown. What is known is that on December 14 Turkish Minister of National Defense Hulusi Akar and General Staff Chief Yashar Guler met in Doha with Faez Sarraj to discuss a memorandum on maritime borders which had already been considered and signed. This meeting should be deemed a demonstration of Turkey’s serious intentions.

Moscow showed little, if any, enthusiasm over this yet another manifestation of Ankara’s zeal. About the Turkish-Libyan accords, Sergey Lavrov said: “There is a UN Security Council resolution that everyone must respect. In this part, for example, the legitimately recognized Libyan parliament in Tobruk is at odds with the signed document. We cannot ignore this. Of course, any steps that are taken “on the ground”, on paper, should take into account the delicacy of this situation and encourage those who are more or less involved in the Libyan crisis, to join forces, gather at the same table.”[ii ]

Meanwhile, Deputy Foreign Minister Alexander Grushko, talking about working with Turkish colleagues on Libya, said: “Libya, like many other partners, is at the center of political contacts (between Moscow and Ankara - AI) ... We are looking for common ground."[iii]

Russia and Turkey have always found room for compromise and even cooperation on Syria. A statement to this effect was recently made by the Turkish Foreign Minister. According to the diplomat, even though Ankara and Moscow support the warring parties in Syria, "they nevertheless always come to agreement." Most likely, they will strike a compromise this time as well: a meeting of the two countries’ leaders is scheduled for the first decade of January, and, according to the press secretary of the Russian president, Vladimir Putin "is bound to touch upon the issue of Libya with his Turkish counterpart."

Moscow continues to adhere to neutrality in the Libyan conflict and welcomes all initiatives which could secure a settlement in the country, devastated by a nine-year civil war. Chiming in with this paradigm is Sergey Lavrov’s meeting with Arab diplomats. Perhaps, fellow believers will find it easier to reconcile the warring factions. And Turkey, if it chooses to stay away from this process, runs the risk of sustaining serious reputational and political losses.

As for Sarraj, he bears little resemblance to Hayreddin Barbarossa, an Algerian pirate who once handed the Ottomans a strategic foothold in North Africa in exchange for guns and political patronage.