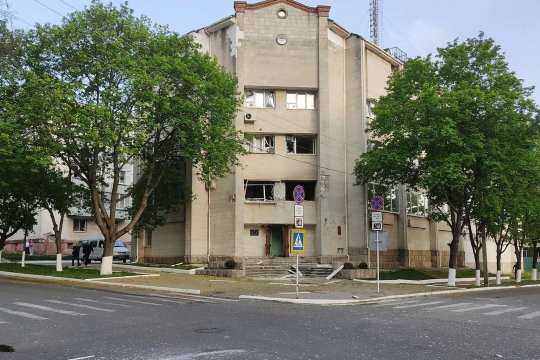 After a series of terrorist acts in Transnistrian Moldavian Republic (the explosion of radio towers, the shelling of Security Ministry offices and the army post in the village of Parkany) nationalist parties in Moldavia have been talking yet again about the need to unite with Romania. In response, Tiraspol has urged Kishinev to sign an agreement on the non-use of force but to no avail.

Speaking louder than anyone in favor of merging with Romania is the Alliance for the Union of Romanians(AUR). This is no wonder: judging by the name of the party, the unification of Romanians №1 and «Romanians» №2 (Moldavians) is its top priority. In the words of the party’s leader George Simion, the decision on the union of Romanians and Moldavians should be passed by the parliaments of Romania and Moldavia, and given the present circumstances, they should do it allegedly in order to prevent the military conflict in Ukraine from spilling into the territory of Moldavia.

AUR, just like Kishinev authorities, puts the blame for the terrorist acts on certain forces which «are interested in the destabilization of the situation in the region». When asked who the forces in question are, they sound evasive, saying that they do not mean Ukraine. However, it’s Ukraine that should be interested to incite the flames of war in this region in order to distract parts of Russian forces which are carrying out an operation on the demilitarization and denazification of Ukraine. Chairman of Ukraine’s Council for National Security and Defense Alexei Danilov urged Georgia and Moldavia earlier to open a second front against Russia.

Also benefiting from a new war in Transnistria is possibly Transnistria. In 1992, Bucharest provoked a bloodshed in the republic, by supporting nationalist forces in Moldavia, in the hope of joining it to Romania and reviving so-called Great Romania. The project fell through thanks to resistance from Transnistrians, who had no desire to become «Romanians» №2.

So-called Great Romania never appeared on the world maps through peaceful methods. In 1918, and in 1941 Great Romania, by which Bucharest  understands the inclusion in the Romanian state of Bessarabia, Northern Bukovina and the territories of Moldavia and Transnistria, was born out of bloodshed. In 1992 Bucharest attempted another  act of violence but  was  stopped.

The project Great Romania has no other ideological content but pro-Nazi. Was it not so, Bucharest would not declare a propaganda war on the Victory over the Nazis, would not support re-naming of city landmarks in Moldavian cities in honor of Romanian collaborators of the Fuhrer, including conducator Antonescu, would not question the Soviet contribution to the defeat of the Nazi plague.

The project Great Romania was never peaceful and cannot be anything else but neo-Nazi, because the most number of successes in pursuing it belongs to Third Reich ally Antonescu, who used methods, such as execution. The Great Romania formula is blood pls fascism. It never had and will never have another formula.

De-freezing the conflict in Transnistria would mean for Bucharest a return to the situation of thirty years ago and a chance to fulfill the project. Under the pretext of guaranteeing national security Romania will be able to deploy yet more American servicemen and obtain more weapons from NATO. In addition, it will be able to conclude an overt, rather than covert, agreement on a military union with Ukraine. This will make it possible for Bucharest to shift the focus of American policy in Eastern Europe from the Baltic Region to the Black Sea. Amid the ongoing operation of the Russian forces in Ukraine, this process is already taking shape, but Romanians want it to be irreversible and larger in scale (1).

Romania positions itself as a Black Sea nation, and Romanian intellectuals are even attempting to interpret this slogan from a philosophical standing; however, this is far from the analysis of existing civilizational meanings – it is the creation of non-existent ones, to please the current geopolitical forces. World history knows no legendary admirals, seafarers and sea pioneers from Romania. How can one possibly speak of Romania as a sea nation?

The Moldavian political class, given the situation in Transnistria, is demonstrating absence of a sober-minded analysis of what is happening. Moldavia’s former Minister of Defense, Brigadier-General Vitalie Marinutza, has described Gagauzia and the Slav-populated part of Moldavia as "the fifth column", which poses a danger to Moldavian statehood, thereby raising the degree of tension in the society.

This euphemism is wrong. For the first time the “fifth column” was used to describe Spanish fascists, advancing on Madrid in 1936. Pro-Hitler Romania, fascinated by the Roman fleur of Italian fascism, started to glorify its Latin past and agreed to conspiracy with Hitler for  the sake of a dream about Great Romania. The title “fifth column”, talking about fascists, should be addressed to Romania and its supporters in Moldavia, but not to the Gagauz and Slav population with their anti-fascist views. The «Roman» arrogance is what Romania is still suffering from. (2).

Moldavia’s refusal to sign an agreement on the non-use of force with Tiraspol triggers alarming thoughts. Transnistria’s Ministry of Foreign Affairs points out that Moldavia has not implemented any of the more than 200 agreements signed by Tiraspol and Kishinev in the years of independence.

De jure Kishinev views Transnistria as a Moldavian territory, thus any Moldavian politician who dares go into talks with Tiraspol will be viewed as a violator of Moldavian laws. Acting so, Kishinev has deliberately cut all the ways towards a peaceful settlement through negotiation (3). How can one argue after all this that Moldavia wants a bloodless end to the conflict? How is it possible to resolve the conflict without bloodshed if negotiations on this issue are downplayed to  the level of a breach of the law?

Even though Transnistrian authorities have made it clear that the terrorist acts were masterminded from Ukraine, Moldavia, Romania and their western curators feign not hearing anything. If Bucharest, Kishinev and the West are motivated to track down the culprits, why don’t they consider all versions, including the one put forward by Transnistrian law enforcers?

But there are Russian peacekeepers along the Dniester who have been blocking the way for Great Romanian revanchists, maintaining peace in the region for 30 years. Romanian and Moldavian authorities demand the withdrawal of the “blue helmets”. If Bucharest and Kishinev do not need Russian peacekeepers in Transnistria, they do not need peace in the region. And they do not need peace because peaceful methods will not do to create Great Romania.