70 years of moving towards comprehensive cooperation: Chinese Embassy hosts a reception to unveil Years of Sino-Russian Scientific, Technical and Innovative Cooperation to be celebrated in 2020-2021 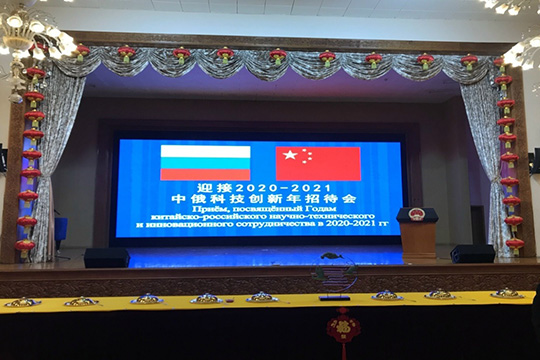 An honorary reception has been held in the run-up to preparations to celebrate Years of Sino-Russian Scientific-Technical and Innovative Cooperation in 2020–2021. Bilateral ties between Russia and China boast a history of 70 years of cooperation that feature coordination of efforts in science, technology and innovation, pursuit of bilateral projects, and the elaboration of a joint plan of action. The reception took place at the Embassy of the People's Republic of China in the Russian Federation on November 15, 2019.

The decision to celebrate Years of Sino-Russian Scientific-Technical and Innovative Cooperation in 2020-2021 was officially announced in June 2019, when President of the People's Republic of China Xi Jinping and President of the Russian Federation Vladimir Vladimirovich Putin signed a joint statement in Moscow on the development of a comprehensive partnership and strategic cooperation.

The reception was attended by about 700 guests, including Ambassador Extraordinary and Plenipotentiary of China to the Russian Federation Zhang Hanhui, Deputy Minister of Education and Science of the Russian Federation G.V. Trubnikov, Chairman of the Council of the Russian Foundation for Basic Research V.Ya. Panchenko, members of the Presidium of the Russian Academy of Sciences, dozens of academicians of various description, representatives of the Ministry of Economic Development, the Ministry of Foreign Affairs, the Ministry of Education and Science, RAS, the Moscow Institute of Physics and Technology, the Joint Institute for Nuclear Research and other research institutes, universities, scientific banks and businesses.

The program of the reception comprised a photo exhibition featuring in detail numerous instances of cooperation between the two countries in scientific, technical and innovative spheres - from Soviet assistance in 156 major projects in the production and mining sectors which laid the foundation for China's initial industrialization phase and gave impetus to the establishment of its industrial-economic system, to cooperation in civil engineering technologies on projects such as the “Federation” Tower in Moskva City, which is one of the first in this area, and a range of  bilateral agreements, including construction projects on the Moscow underground.

Also on the display were photographs of cooperation in mobile communication; aircraft, space, nuclear energy technologies; organization of research and coordination of activities in mega-science.

The chronology of bilateral relations was displayed in a film which was presented during the event tracking the development of Russia-China scientific and technical cooperation from October 2, 1949 to the present day. The scientific and technical cooperation of the two countries began with the establishment of diplomatic relations between the USSR and the PRC. In the early years of cooperation, the Soviet Union acted as an "elder brother" to China assisting in every possible way in securing the development of China, including through sending top specialists and sharing the latest technologies. Over time, the two powers became equal partners.

Energy, aircraft manufacturing, space technology, medicine are the main areas of bilateral cooperation. Over the past 10 years, the Russian Federation and China have implemented a large number of joint projects and the two countries’ scientific, technical and innovative cooperation hinges on a well-developed mechanism of international interaction.

As far back as in 1996, Russia and China signed an agreement on regular meetings of heads of government which focused on joint projects in science and technology. In June 2016, Russia and China took yet another step towards each other after the Ministry of Science and Technology of China and the Ministry of Economic Development of the Russian Federation signed a memorandum of understanding which enabled the two countries to pursue a more profound, more detailed format of the Sino-Russian innovation dialogue. 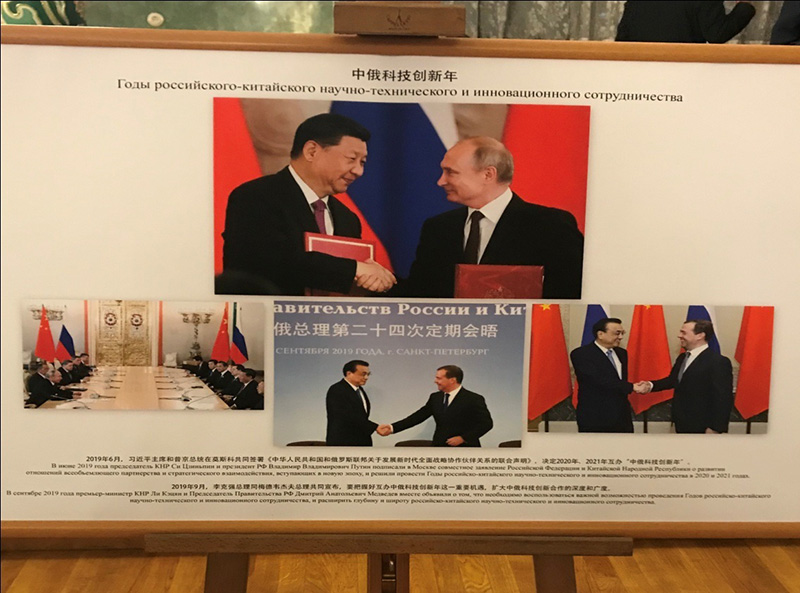 But cooperation in science and technology is not confined to the above mentioned projects. Russia and China have also been sharing knowledge and experience in  the training of highly qualified specialists on the basis of various higher education institutions and student exchange programs. The Association of Technical Universities of Russia and China, which was set up in 2011, embraces more than 60 Russian and Chinese universities.

At present, Russia and China are on the threshold of an even closer and larger-scale cooperation with a focus on innovation. As bilateral partnership is entering a new stage, the two countries’ leaders have made it clear that the next two years will mark a period of extensive cooperation in science and innovation. In 2020-2021, Russia and China is to witness fruitful cooperation that will positively affect the national interests of both countries. 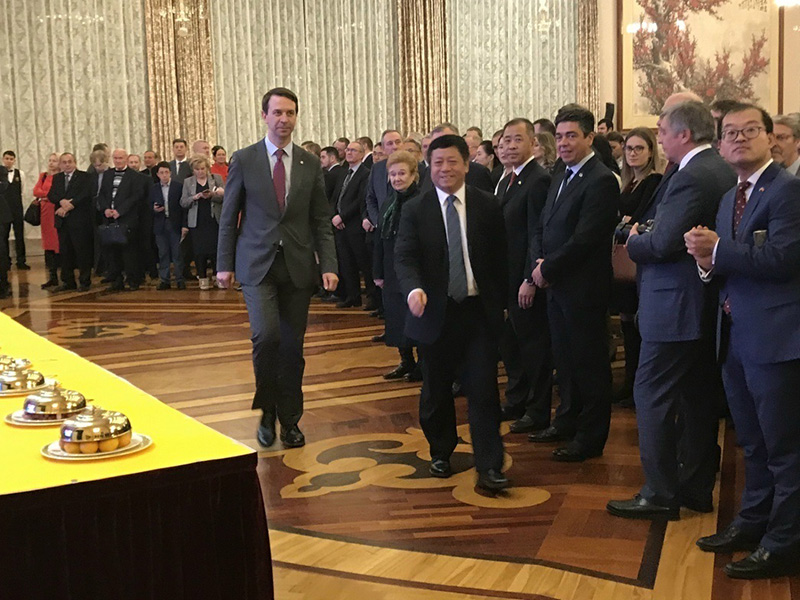 The greeting message came from the organizer of the event, Ambassador Extraordinary and Plenipotentiary of the People's Republic of China to the Russian Federation, Zhang Hanhui, who said that the reception paves the way for holding Years of Sino-Russian Scientific, Technical and Innovative Cooperation in 2020–2021 and creates a favorable atmosphere for the implementation of the project. This is the first time the two countries mark Years of Scientific, Technical and Innovative Cooperation.

“Scientific-Technical and Innovative Cooperation is gradually becoming a new rising star against the backdrop of improving the quality of relations between the two countries and opens the way for promoting Sino-Russian cooperation,” - the ambassador said.

Mr. Zhang Hanhui spoke of ongoing projects in the above mentioned areas and  touched upon the agreements signed in these areas, saying that the Chinese Embassy will do everything they can to secure the successful fulfillment of these agreements and projects and successfully hold Years of Sino-Russian Scientific, Technical and Innovative Cooperation in 2020–2021.

“China is ready to move forward in tandem with such a good neighbor, trustworthy partner and good friend as Russia, ready to always use the opportunities for development and prosperity, to increase the economic, scientific and technological potential of the two countries, to safeguard security interests, bring good to people around the world and contribute to the progress of human civilization,” - the ambassador said concluding his speech.

In turn, Deputy Minister of Education and Science of the Russian Federation G.V. Trubnikov pointed out that since the leaders of Russia and China hold frequent meetings, it is important to ensure that the objectives they set are put into effect. He signaled the importance of the national project "Science" the results of which are to determine Russia’s entry into the top five countries that carry out scientific research in priority areas of scientific and technological development.

According to the Russian deputy minister, China is Russia’s major partner among countries of the Asia Pacific Region. In promoting cooperation with China, he said, Russia pays special attention to the development of scientific, technical and innovative cooperation. The minister put emphasis on successful innovative projects adding that in the course of preparations for Years of Scientific, Technical and Innovative Cooperation in 2020-2021, the ministry has received 800 initiatives from organizations across the Russian Federation to be included in the program of Years events. Of these proposals they have selected more than 500 projects related to the occasion and aimed at supporting cooperation in research and innovation.

According to G.V. Trubnikov, Russian and Chinese partners plan to hold the opening ceremony of the Years in April 2020 in Zhengzhou, the venue of the 17th China International Exhibition Conference on the Exchange of Experts, in which Russia will take part.

Chairman of the Council of the Russian Foundation for Basic Research V.Ya. Panchenko pointed out the importance of fundamental research for innovation. He identified a number of problems that are of paramount importance, including within the framework of international organizations, in particular, under the UN sustainable development program, pointing out that at present the two countries are pursuing more than 100 joint scientific innovation projects in a variety of areas, including nuclear, socio-humanitarian, medical and economic ones. Mr.Panchenko  spoke of the advantages either party would enjoy in case the projects yielded fruit and focused on the options for Russia and China to connect to the Silk Road Economic Belt.

“Our countries, and we are sure of this, are reliable scientific partners. The collaboration of our scientists has passed the test of time and has demonstrated high efficiency. I am convinced that the future lies with our countries’ scientific potential, ” - V.Ya. Panchenko said. 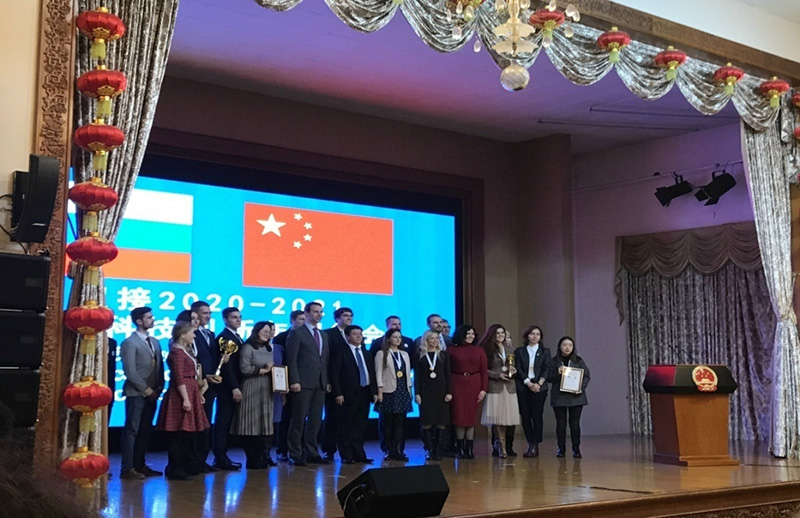 The program of the reception featured a ceremony to award the winners of the intellectual competition "Contest of Wits", which was dedicated to the scientific, technical and innovative cooperation between Russia and China. Laureates of the first three categories received honorary awards in the form of cups and diplomas from the Extraordinary and Plenipotentiary Ambassador of the People's Republic of China in the Russian Federation Zhang Hanhui and Deputy Minister of Education and Science of the Russian Federation G.V. Trubnikov. 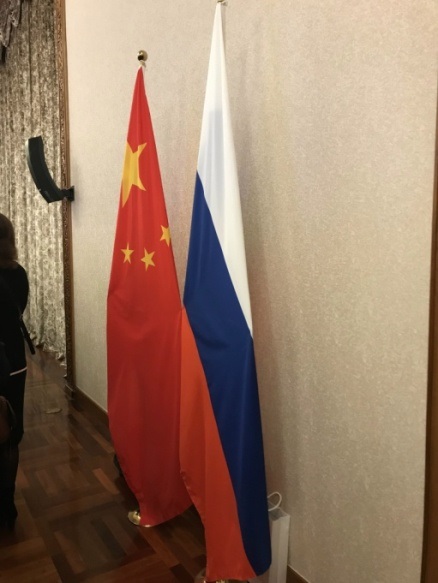 After the reception, honoring the Years of Sino-Russian Scientific-Technical and Innovative Cooperation in 2020–2021, the participants were invited to a festive buffet table.