Alexander Lukashevich: «crisis in OSCE has yet to be overcome» 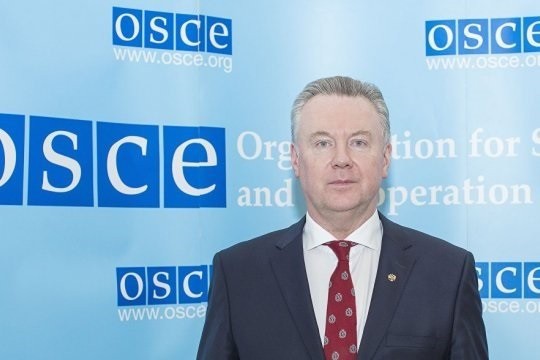 Russia’ Permanent Representative to the Organization for Security and Cooperation in Europe Alexander Lukashevich has given an online briefing in Moscow about challenges the Russian diplomacy is facing in OSCE. The issues covered in the briefing included the situation in the south-east of Ukraine, the scene of a long-running conflict between the self-declared Donetsk and Lugansk republics and Kyiv.

According to Alexander Lukashevich, the fact that Russia and Austria are resuming regular air communication as of June 10th inspires hope that a return of political life to normal is a matter of near future.

The Russian representative spoke with caution about the OSCE’s new leadership, pointing out that the new Secretary-General, Helga Schmidt, is widely known as a powerful politician and diplomat, who, since 2016,  has also occupied the post of Secretary-General of European External Action Service. However, he  said, it is too early to make any major forecasts or generalize about her performance because the OSCE lives by different rules, which are devised by other members. On top of all that, Helga Schmidt is planning to visit Moscow in person in the middle of June 2021.

The OSCE has undergone other staff changes. The post of High Commissioner for National Minorities went to former Foreign Minister of Kazakhstan Kairat Abdrakhmanov. «Thus, for the first time in the history of the OSCE an executive post in the Organization has been given to a representative of the Commonwealth of Independent States», - A.Lukashevich said.

Nevertheless, in recent years there have been no particularly visible positive changes in the work of the OSCE. In the words of the Russian representative, the Organization is experiencing a long-running crisis. «After nearly 25 years of dealing with issues related to pan-European cooperation, I am witnessing, to my profound regret, the decline of this organization. Both the OSCE proper and the Council of Europe have been losing strength. What we see is a race for the dominance of the purely “Atlantist” point of view», - A.Lukashevich emphasized.

The so-called “Atlantists”, the Russian diplomat said, have de facto reduced to zero the work performed by Russia and other OSCE members to make the Organization more effective and dynamic, to adapt it to the changing political reality. «To this end, we set up a team of highly qualified experts. Of particular importance was the 14th Session of the Council of Ministers of the OSCE in Brussels in 2006. The participants agreed to carry out a special procedure to clarify the functions of executive bodies within the Organization. However, no one acted on it. Compared to the period between 1990 and the 2000s, the OSCE has become its own antipode and is undergoing a crisis of trust, the attempts to establish a domineering position and meddle with the domestic affairs of sovereign states. All these moves are at odds with the letter and spirit of the Helsinki Final Act of 1975», - A.Lukashevich said.

As he addressed the participants in the briefing, Alexander Lukashevich made a few comments on a visit to Ukraine by OSCE Secretary-General Helga Schmidt, which took place on May 26 through 30. The Organization’s new leader went to Donbass, but, Lukashevich pointed out, she saw only the territories which are currently under the control of Kyiv, whereas all the issues of discord and political tension in the south-east of Ukraine are concentrated in regions where civilian infrastructure facilities – houses, schools, hospitals - come under fire. «Helga Schmidt’s news conference was difficult to follow as the Ukrainian interpreter kept interrupting her. It is still unclear whether the OSCE under Helga Schmidt will be prepared to work towards de-escalation of conflict in Donbass. What is clear is that she was presented with a view that suits Kyiv. As for the rest of the country’s south-eastern territories, which suffer from attacks and lawlessness the most, she made no time. But we must remember that the OSCE’s Special Monitoring Mission is working on the entire territory engulfed by the conflict, while peace will be impossible without establishing contact with all parties to the confrontation. The Ukrainian side argues that on the territories of self-declared republics there are no conditions to ensure the security of international organizations. They are thereby looking for ways to evade the implementation of additional measures to cease fire, which were approved by the Contact Group on a peaceful settlement in the east of Ukraine in July 2020», - A.Lukashevich said.

According to Lukashevich, the reports issued by the OSCE Special Monitoring Mission often lack logic. «It is unclear from the repots who exactly breaks the ceasefire. Not knowing in advance where units of Ukraine’s Armed Forces and pro-Russian fighters are deployed, it is difficult to determine who bears responsibility for violating the ceasefire», - the Russian diplomat remarked.

In addition, the Special Monitoring Mission has been attempting to carry out unofficial work in regions adjacent to the Crimean Peninsula, first of all, in the Kherson Region. «There have been attempts to secure the opening of more patrol bases, as said before, along the uncontrolled section of the Russian-Ukrainian border. But such moves were stopped at once, as the Mission can act only within the framework of regulations envisaged by its Charter and within the boundaries of the conflict zone», - A.Lukashevich said.

Is there a place for Russians among the indigenous people of Ukraine?

The Russian representative to the OSCE commented on the bill “On the Indigenous Peoples of Ukraine”, which was submitted by President Vladimir Zelensky to the Ukrainian Parliament, Verkhovna Rada. The document is marked as urgent and is designed to determine the rights of indigenous peoples and a procedure to guarantee these rights. Significantly, there is no mention of Russians in it.

«Once the draft law came out, we asked Ukrainian representatives to comment on how it is related to the constitutional regulations on the protection of the rights of national minorities, what these provisions will aim at, and the rights of which minorities will be protected by the new legislation. Judging by a preliminary scrutiny, the document is discriminatory and breaches Article 10 of Ukraine’s Constitution, which is currently in force», - A.Lukashevich said.