OSCE and ‘pitfalls’ of Helsinki process 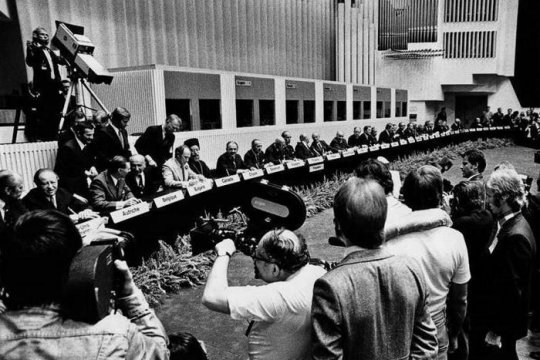 The Valdai International Club has hosted an online discussion in connection with the 45th anniversary of the signing of the Final Act of the Conference for Security and Cooperation in Europe (CSCE) in Helsinki.

The signing of the Helsinki Act is traditionally considered a pivotal point in the development of Europe’s international politics, an event that could create a foundation for an undivided regional security system. According to a commonly recognized point of view, the first and only large-scale Cold War-era agreement between the East and the West secured the easing of tension and eliminated many reasons that could cause a global war on the continent. However, after the OSCE failed to acquire the status of a universal organization in the sphere of regional security and cooperation after the end of the Cold War, division lines in Europe remained intact. Was the Agreement truly meaningful for peace in Europe or was it but an episode of the Cold War and each of the parties involved tried to use it for their own gains?

In the words of Program Director of the Valdai Club Timofei Bordachev, the signing of the Helsinki Final Act is an event of historic importance which is interpreted differently depending on individual preferences. Some people believe that the Helsinki Act should be considered a great achievement for European security. Thei opponents view the document as the start of a strategic defeat of the USSR in the Cold War. “At present, the Organization for Security and Cooperation in Europe is experiencing hard times following the activities of our European and American partners, who pursue a joint agenda in Europe, blocking any alternative views”, - the expert said.

Russia’s permanent representative in OSCE Alexander Lukashevich has said that the signing of the Helsinki Accords is the triumph of collective reason. “It is impossible to agree that it was a defeat of the Soviet Union. In spite of the ideological situation of 1975 and preparatory steps, we can say that it was the triumph of Soviet diplomacy. That  this organization, originally designed to maintain peace on the continent, transformed before our very eyes into a structure cultivating suspicion and confrontation in Europe, is another matter”, - he said.

The Russian diplomat reminded the participants in the discussion that the United States was the main opponent to the development of the CSCE into a full-blown functional organization. It is the United States, he says, that prevented the principles of equal cooperation in Europe which were put forward at the OSCE summit in Paris in 1990 from taking effect. “Originally, the  Helsinki Final Act was  drafted without the participation of the USA,  or less so, Canada. It was only in the final stage that they resolved to do so, since without global players it would be impossible to build a structure that would be accepted by all European countries” – Lukashevich explained.

The Russian representative referred to US President George Bush Sr., who said as he addressed a news conference after a CSCE summit in Brussels on December 4th 1989: “If today I signal to you, Europeans, that  the Cold War is over, then the question arises: what are you, the United States, doing in Europe with your troops?” The US president extended his ideas as he received German Chancellor Helmut Kohl in Camp David on February 24th 1990: “CSCE cannot replace NATO as a western deterrent in Europe and a fundamental foundation for the presence of American troops in Europe. If it happens, we will have a real problem.”

“All these positions are well-known, when we remind American and European politicians about them they fall silent. There are no comments, because these statements speak volumes about what has been happening within the OSCE over the past decades”, - Lukashevich underscored.

It was Russia that initiated reformatting the Conference into a full-fledged Organization and creating a matrix of European security with due regard for new challenges and threats. Members of the OSCE assumed mutual commitments on military restraint and institutionalization of the European collective decision-making process. All this was implemented “on paper”, despite resistance from the USA and some members of the EU. They adopted Security Charter and Security Platform, based on cooperation. Interinstitutional cooperation on the basis of a central element. They are trying not to remember about it now.

“The year 2019 marked the jubilee of the European Security Charter. Moscow’s proposal to reaffirm these principles ran into misunderstanding and was dumped without preliminary consideration. Hence, the OSCE principles do not work any more. This is the more so sad given that all participants in the OSCE summit in Astana in 2010 reiterated their intention to take further steps to promote the Helsinki Accords and passed a decision at the head of state and government level to create a single and undivided security system in Europe, Euro-Atlantic and Eurasia on the basis of cooperation and dialogue. Unfortunately, western powers treat all this as an “archive” long put on the shelf. Should the current principles persist, OSCE is in for no good”, - Lukashevich concluded.

Rein Mullerson, Honorary Professor at Tallinn University, believes that the main reason behind the crushed hopes of building a new world order stems from the fact that international forces has lost the balance of strength. At the time unipolarity, which came after the disintegration of the USSR, the USA came to believe in their omnipotence and global might. “Power ruins personality while international is powerless because there is no force behind it”, - the expert said.

Is there a way out of the situation? Rein Mullerson sounds sceptic. “Washington is against the principles of a multipolar world and is in favor of previous positions. This does nothing to promote cooperation”, - the Estonian analyst said.

Alexander Rar, Director of the German-Russian Forum, sounded less categorical. He described the Helsinki Final Act as a re-creation of Yalta Agreements but with an injection of liberal values and without a division into the winners and the losers. If successful, such an approach, based on the “changes through trade” principle, could lead to the formation of a common foundation of legitimate “soft” security in Europe. However, at the end of the 1970s, after the arrival of Soviet troops in Afghanistan, the Cold War resumed with a renewed vigor while the thaw of the second half of the 1980s led to the unilateral dominance of the United States and its allies, who, having taken advantage of the opportunities before them, began to build a system of European security which would serve their needs. All this has disabled the OSCE, which has come to serve as an instrument to control the political processes in countries which aspire to become part of “Greater West”.

In spite of such a sad outcome, it would be a shame if the OSCE disappeared completely. According to A.Rar, the rapidly changing international situation may present the organization with new opportunities. However, a new effective security architecture for entire Europe will require partnership with the Eurasian Economic Union and a real, not verbally declared, implementation of the “Europe from Lisbon to Vladivostok” principle.

Should Russia be part of European balance or is this agenda, along with the OSCE, part of the past? Professor Istomin of the applied analysis department of the Moscow Institute of International Relations says Moscow is consistently pursuing the policy of building an inclusive bloc-free security architecture which would enable Russia to enjoy equal status with western partners. The signing of the Helsinki Final Act helped our country to achieve a lot in this area and create a regular negotiating platform to this end. However, the mere signing of the document was not enough to settle the long outstanding fundamental issues. As for the thaw of the 70s, it became possible thanks to the processes taking place outside Europe, rather than to the Helsinki Conference. At present, the “European” direction is neither the most promising, nor the only possible for Russia. However, the EU and relations with Brussels preserve their value, even though many features of the European system are extremely unpleasant for Moscow, while the legacy of ideological and bloc confrontation has yet to be overcome.