“Chagall: Between Heaven and Earth” opened in the “New Jerusalem” Museum 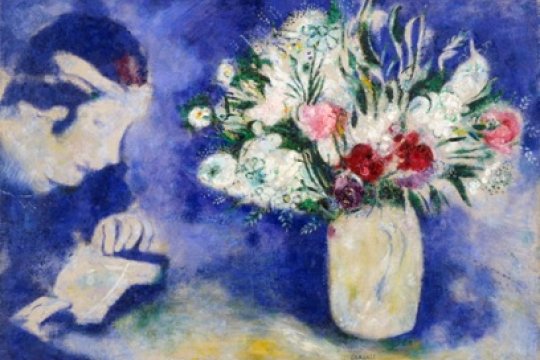 “Bella with a Book and a Vase”, oil on canvas, 1926, private collection

A major retrospective exhibition “Chagall: Between Heaven and Earth” takes place in the historical-architectural “New Jerusalem” museum located in the Moscow Region. Installed in the modern exhibition complex next to the New Jerusalem monastery, the historical heart of the city of Istra, the exhibition presents 239 works by the Russian-French artist (1887, Vitebsk – 1985, Saint-Paul-de-Vence) including paintings, etchings, drawings, and tapestries.

Exhibitions of Chagall's works are regular events at prestigious museums and galleries across the world and have long become an inseparable agenda of the international art scene. The breadth of his work spans almost every artistic medium, yet some of his artworks which are part of private and some foreign museum collections have seldom or never been displayed in Russia. Organizers of the current show had an ultimate goal to bridge this gap. The exhibition brings together artworks from the museums and private collections of three countries — Russia, France and Belarus: the Centre Pompidou, the Marc Chagall Museum in Vitebsk, the Pushkin State Museum of Fine Arts, the Museum of the History of Jews in Russia, the National Museum of Marc Chagall in Nice. 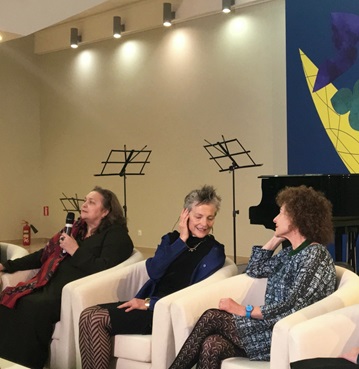 Curator Ekaterina Selezneva and Chagall’s granddaughters at the opening

Chagall’s granddaughters, the twin sisters Bella and Meret Meyer, who have been protecting and popularising Chagall’s artistic legacy for decades, always claimed that it was a gift and burden to be granddaughters of one of the 20th century’s greatest artists. They are regular visitors to Chagall’s Museum in Vitebsk and were actively involved in the New Jerusalem exhibition preparation. At the opening ceremony Meret Meyer, who is also the creator of the Marc Chagall committee, emphasized: “Russia has always been in the heart of Chagall as well as in his works…This exhibition looks like a short journey, though in fact it’s a long way to go to make us understand how much enchantment is needed to make us enchanted today.”

The show, meticulously curated by Ekаterina Selezneva, a renowned expert in the Marc Chagall Committee in Paris and Honoured Cultural Worker of Russia, builds a bridge between Jerusalem portrayed in Chagall's works and the New Jerusalem outside Moscow. The idea of the exhibition is encoded in the words of Marc Chagall himself: "Painting seemed to me some kind of window through which I flew into another world." He claimed that he was “born between heaven and earth” and constantly resided in this “intermediate” space, understanding his existence in art and life, as being in a special dimension. 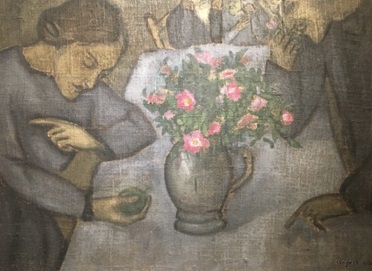 The exhibition gradually unfolds in the following two parallel lines — thematic and chronological, as the viewer moves through three multidimensional spaces: “Earthly Life” (painting and graphics of the first quarter of the 20th century); “Travels and bridges” (works of the second quarter of the 20th century, connected with a trip to the Holy Land) and “Genesis of heaven” (works of the second half of the 20th century). “What is so wonderful is that the exhibition introduces us to his world, us, human beings, in the most generous, yet delicate ways. It has become magical because we are now in the New Jerusalem which brings us to our own Jerusalem”, Bella, the floral designer from New York, said at the opening. 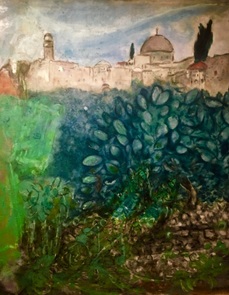 Marc Chagall’s story with the Holy Land began in 1930, when Ambroise Vollard, one of the most important art dealers of his time, commissioned him to undertake a series of illustrations of the Bible. Chagall first arrived in then Palestine in February 1931 and ended up staying for two months. Chagall travelled a great deal across the country, painting and drawing. The trip left a vivid impression on him, and once back in Paris, the views and visions he had experienced were echoed in many of The Bible etchings. The artist wrote: “Since my early youth I have been fascinated by the Bible. It has always seemed to me and it seems to me still that it is the greatest source of poetry of all time. Since then I have sought this reflection in life and in art. The Bible is like an echo of nature and this secret I have tried to transmit”.  Raised in the Jewish family, Chagall respected the tradition, but in his later life he visualized his religious vision through his art. Here is what Bella Meyer explained in our brief interview: “He remained very Jewish all his life respecting the tradition, and he continued to go back to the Bible which he knew from the Cheder. And he painted biblical plots even when he painted something else, even the Crucifixion, that’s when he said he prayed.” His stained-glass windows opened onto the world from the cathedrals of Reims and Metz, the United Nations, and the Hadassah Hospital in Jerusalem. 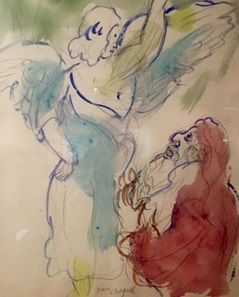 “Noah Receives the Order to Build the Arc”, gouache and pencil on paper, 1931

Strolling around the museum both granddaughters of Chagall spoke in front of the portrait known as “Bella with Carnation”, a very special piece for the family which was carefully kept in their parent’s house. The sisters did not know their grandmother, Chagall’s first wife and Muse, who passed away in 1944 but who stayed to live in his art. 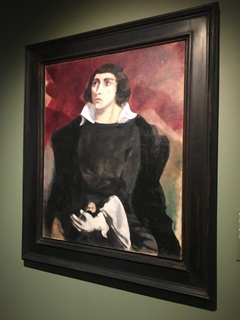 Also featured in this exhibition are 22 brilliantly hand-coloured images from his 1956 and 1960 suites of Bible lithographs which he presented to his second wife. They have never been on the display in Russia. Besides Chagall’s works, the exposition includes household items and religious goods from the MIEVR collection, luboks, and tiles from the collection of the New Jerusalem Museum. The selection of these exhibits is not accidental; it substantially supplements and explains the origins of the artist's work — at the exhibition, you can see how these real objects resurfaced in his works. Such artefacts could surround Chagall in his childhood and youth. He later blended all these flying white cows and upside-down houses, purple skies, and flowered cloths into the personal iconography. These images stayed in his art forever and with us, his grateful admirers.