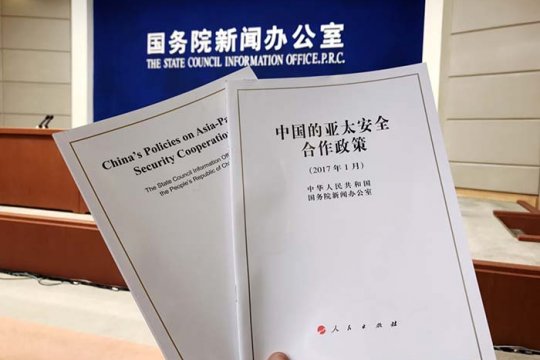 The Office of the State Council of the People's Republic of China has published a paper titled the White Paper “National Defense in  New Era”. The document is designed to become a response of the Chinese leadership to other countries’ fears over the growing military power of the PRC. The paper outlines the main points of China’s national defense agenda. They envisage the containment of any external aggression, the safety of the population, social stability, protection of the territorial integrity and the marine and space interests of the PRC.

The White Paper for the first time outlines the priorities of the Chinese army in the new era on the basis of the “four strategic pillars”. According to the paper, the Chinese army, acting in accordance with the strategic requirements of national security and development, carries out the assignments set by the Party and the people and provides strategic support for strengthening party leadership and the socialist system and  for protecting the sovereignty, unity and territorial integrity of the country. In addition, the army guarantees strategic support to protect the interests of China abroad and contributes to peace and development on the planet. [1]

This document details defense expenditures and their structure. Over the past decades, the PRC has significantly reduced its military spending in proportion to national GDP and the state budget, but has increased its absolute value. In 1979, the country's defense expenditures accounted for 5.43% of the GDP, while in 2017 - 1.26%. At present, China is the world’s sixth in the ratio of military budget to GDP (after the United States, Russia, India, Britain and France), while it holds  second place in the absolute volume of military expenses. [2]

What triggered most interest is the statement under which the Chinese leadership vows to never be the first to use nuclear weapons whatever the circumstances. Beijing, the document says, has no intentions to participate in the nuclear arms race and will maintain and strengthen its nuclear potential only for ensuring national security. “China calls for a complete ban and destruction of nuclear weapons, is not going to compete with any country in an arms race, and will maintain its nuclear potential at a level appropriate to meet the needs of national security,” - the White Paper says. [3]

This provision has caused the greatest number of questions: for one, why, in this case, China refuses to join the Intermediate-Range Nuclear Forces Treaty? What is often mentioned in this regard is that the US President has announced his intention to conclude a large-scale nuclear agreement with Russia and China on arms control. Perhaps, this is possible in the future.

But the important thing is that national defense policy and operational issues of arms control go separate. We remember Barack Obama’s speech on nuclear-free world, which he delivered in Prague in 2010 and for which he received the Nobel Peace Prize. But this did not mean and does not mean that the United States is ready to immediately dump nuclear weapons.

Incidentally, in the 2011 White Paper on Defense Issues, China (the only of the globally recognized nuclear powers) was the first to declare non-use of nuclear weapons. As for Beijing’s participation in disarmament negotiations, it is determined by the balance of strategic deterrence forces worldwide.

That is why, after D. Trump's statement about the US withdrawal from the Intermediate-Range Nuclear Forces Treaty, China, whose nuclear potential is considerably smaller than that of the US, refused to join the treaty until the two countries’ potentials became, if not equal, then at least comparable. Meanwhile, Beijing will welcome participation in the negotiations of other members of the Nuclear Five - Britain and France, as well as unofficial nuclear powers, such as India and Pakistan.

In addition, it is important to separate such issues as reduction of nuclear weapons and their means of delivery, which comprise ballistic missiles, including medium and short- range. The latter, according to the Chinese doctrine, are classified as strategic weapons.

In general, the White Paper gives you a feeling that China will be ready to join the process of control of nuclear weapons and their means of delivery when the time is right and the relevant conditions are in place. This, in Beijing’s opinion, meets the interests of national security. And the time to do so may well come in the foreseeable future.