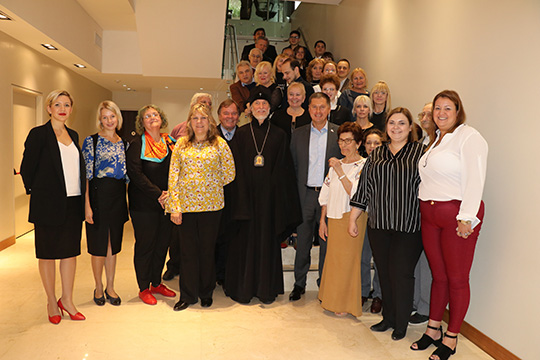 The analysis of recent congresses attended by Russian compatriots living abroad has revealed a clear trend on the part of the Russian authorities towards boosting cooperation and establishing new contacts with Russians abroad. The Russian government is set on providing our compatriots with legal assistance and is determined to support the initiatives coming from them in all spheres of human activity: from economic and humanitarian to cultural and historical projects. Ever more significance is being attached to working with compatriot organizations in such geographically remote corners of our planet as Latin America or Oceania.

On April 27, Argentina played host to the 13th Conference of the Coordinating Council of Russian Compatriot Organizations in Argentina. The participants in the conference shared their views and held an open dialogue on cooperation in a wide range of issues of the current agenda, including cultural, social, trade and economic ties and even called for a bilateral political dialogue.

The participants in the conference focused on the forthcoming Victory Day celebrations. According to Russian Ambassador to Argentina Dmitry Feoktistov, this year the "Immortal Regiment" march, which will take place in Buenos Aires on May 4th, will expand to the cities of Mar del Plata and Paraná. The diplomat indicated a huge public interest in the event throughout the country and did not rule out other cities joining in. In Buenos Aires, the participants in "Immortal Regiment" will walk past the monument to San Martin. The Russian ambassador to Argentina said three veterans of the Great Patriotic War will take part in the festivities. He also remarked that "they are waiting for guests from the CIS and all those who treasure the memory of their ancestors and relatives."

The "Immortal Regiment" march will be held on May 4th in the Argentine capital Buenos Aires, as well as in the cities of Mar del Plata and Paraná

According to Dmitry Feoktistov, on May 9th Buenos Aires will play host to a concert which for the first time will be held in a format other than the traditional Russia-Belarus event but with the participation of all diplomats accredited to this South American country from the CIS. “At last, all CIS ambassadors were able to strike an agreement,” - Dmitry Feoktistov pointed out. Victory Day events will bring together heads of diplomatic missions of Russia, Belarus, Armenia and Azerbaijan.

In his address to the participants in the conference Dmitry Feoktistov presented a brief analysis of the current state of Russian-Argentine relations. In particular, the Russian ambassador said that "our trade turnover with Argentina last year grew by 40 percent and is currently at $ 1, 250 million." However, he said, considering the strategic relations between the Russian Federation and Argentina, this level is far lower than Buenos Aires’ trade with China, the US or Brazil. “We are pleased, but not much,” - he said. “For such a status of relations, one billion is not enough.”

Russia’s trade with Argentina in 2018 amounted to 1.250 billion dollars

As Dmitry Feoktistov pointed out, despite a huge distance, Russia and domestic companies are interested in participating in the development of the Argentine market. “At present, there are a lot of projects in various fields awaiting consideration: projects in the nuclear sector, infrastructure and energy projects,” - he noted. - “We hope that despite this year being a challenging election year for the people of Argentina, who are faced with political instability and a rather difficult economic situation, it will not affect our relations.”

“Whatever the election outcome is, we will work with any government,” - the Russian ambassador said. - “Our strategic partnership has seen different times - ups and downs.”

According to the draft resolution in the wake of the conference, priority is to be given to protection of the rights and interests of compatriots, preservation of Russian traditions, active participation in events dedicated to the celebration of Victory in the Great Patriotic War, prevention of falsification of events and distortion of history, and the promotion of a positive image of Russia.

In this context, the Russian ambassador spoke highly of the role of our compatriots in ensuring that the Russia Today TV channel continue to broadcast within the free broadcasting network of Argentina. Dmitry Feoktistov urged compatriots to actively demonstrate their civic position and “not hesitate to write letters to newspapers” if they do not agree with the local news.

The Russian ambassador warned that the Argentine mass media could present events involving Russia in a distorted light.

The participants in the conference backed a proposal of the Russian Embassy to launch a pilot project in education which envisages the creation of experimental Spanish-Russian classes based on the same syllabus in schools in Argentine provinces.

The decisions adopted by the participants in the conference will be used in the work of the regional conference of the Coordination Councils of Russian Compatriot Organizations abroad, which is scheduled to be held in Buenos Aires on May 16-17 and will bring together representatives from all countries of Latin America, Australia and New Zealand.