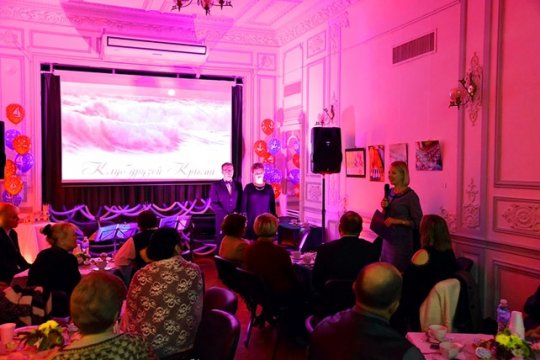 This year marks five years since the Crimea Peninsula became part of the Russian Federation. A variety of events in honor of this historic event have been held throughout the globe. The Russian-speaking community in Argentina has organized a flash mob dedicated to Crimea’s reunification with Russia, despite certain political differences on the issue. And activists of the Argentine Youth Organization "Phoenix" have set up Crimea Friends Club, which flung its doors open for all like-minded people in Buenos Aires on June 27.

As part of this event there took place a grand concert that brought together a large number of participants who feel connected with Crimea in one way or another, including those who were born and grew up there, who dedicated their lives to the development of this region, and local people who feel a certain link to the peninsula. The participants sang songs, read poems associated with Crimea, presented interesting facts about its history, the events of past years and decades, shared their impressions of traveling there in recent years, and enjoyed a traditional Russian meal.

The club will focus on the development of social and cultural relations between Argentina and the Republic of Crimea, and will keep compatriots informed about what is happening on the peninsula.

The International Affairs correspondent had to wait to talk with the Club organizers since on the Opening Day they wholly and totally devoted themselves to the participants in the ceremony. The “International Affairs” interview, despite the gloomy winter weekend (it is currently winter in the Southern Hemisphere), was given by one of the activists of the Club, the head of the Youth Organization “Phoenix” in Argentina, Elizaveta Petrenko.

International Affairs: Elizaveta, could you tell our readers about the Club? What preceded its creation?

Elizaveta Petrenko: Only now have I collected my thoughts, after the opening of the “Crimea Friends Club”. You must have guessed already that the project required a lot of effort, given the difficult geopolitical situation involving Crimea. What provided impetus for the creation of the Club was the participation of our youth organization "Phoenix" in the flash mob (we are talking about the video of the event #вдобрыйпутькрым), dedicated to the fifth anniversary of Crimea’s unification with Russia. People started writing to me saying that they were very touched by our video. They suggested that it would be good if in Argentina we were able to gather people from Crimea who love it, know the history of Crimea or are simply interested in this region.

I have to say that the offer was unexpected. We did not count on such a response! But the persistence with which people wrote us made us think, so we thought: why not? And after consulting the guys, we chose to create the Crimea Friends Club. While preparing the groundwork we began to read on the subject and get interested. And we were pleasantly surprised that we are not the only ones: there are already a lot of such clubs, established and operating in many countries of the world!

International Affairs: How was the idea of the Club born? Who undertook to unite people? What difficulties did you face?

We live far from Russia, and we ought to speak about Crimea with caution.

E. Petrenko: It was decided that our youth organization “Phoenix” would initiate the creation of this Club. To say that it was difficult is to say nothing! We have already held large-scale public events, in which we tried to show and acquaint the audience with our culture and history (for example, the “Constellation of Nations” Festival, which we wrote about earlier). But here is a completely different, entirely different format! We needed this event to capture people’s interest, so that they would like to go and get acquainted with Crimea. And we did our best to build a scenario so as not to draw attention to the political aspects of the issue. To get the project moving we decided that the Club is a community of people of different ages, a place for joyful communication that brings the joy of joint creation, it is a venue for meetings of friends and like-minded people. The club is a meeting place for all people who are in love with Crimea!

You know, we live far from Russia, and this issue is very sensitive and potentially dangerous. We need to talk about Crimea with great caution. Given this, we decided that our first meeting would take the form of a sea voyage! And we chose the “Blue Light” format as it allows you to start a conversation in a relaxed, homelike  environment, thereby encouraging people to engage in a dialogue, conversation.

International Affairs: Who is helping you on this no-easy track?

E. Petrenko: Our idea was backed by the Russian Embassy and Rossotrudnichestvo. The “House of Russia” (as Argentinians call the Russian Center for Science and Culture) kindly provided us with conference space and granted technical assistance  on the opening day. Also, our initiative was approved by Pavel Shperov,  deputy of the State Duma of the Federal Assembly of the Russian Federation, who took part in the Regional Conference of Compatriots in Buenos Aires a month ago. On the day of the Club’s opening, he sent us a thematic video message and we received similar video messages from Crimeans in Sevastopol, Gurzuf, Armyansk.

International Affairs: Elizaveta, could you tell us about the program of the event?

E. Petrenko: Appearing in the concert program were singers and performers, both Argentine and Russian. I think no one was left unmoved by Argentine celebrities Liliana Vigo and Victor Betinotti. The audience gave a warm and hearty welcome to the much beloved instrumental trio “Slaviane”,  to Lilia Barinova, who sang songs about  Crimea and, of course, to a young talent, the accordionist, winner of the “Hello, we are looking for talents” Contest - Ivan Kovalchuk. The audience also enjoyed Russian pop songs. The organizers showed video sketches about the history of Crimea. The participants shared memories of the days they spent in Crimea, while the winner of the International Reader Competition Ekaterina Ikan spoke so emotionally, sharing her experiences while visiting the international camp "Artek".

International Affairs: What are your plans for the development of the Club in the near future?

E. Petrenko: The Crimea Friends Club will work on a permanent basis. Club members will gather for meetings once every 3 months. We plan photo exhibitions, lectures, video conferences with clubs from other countries, film screenings, interviews with remarkable people, and thematic concerts.

International Affairs: Thank you for the interview. We wish you success in your activity!

E. Petrenko: Thank you for visiting our Club. We will wait for new meetings!