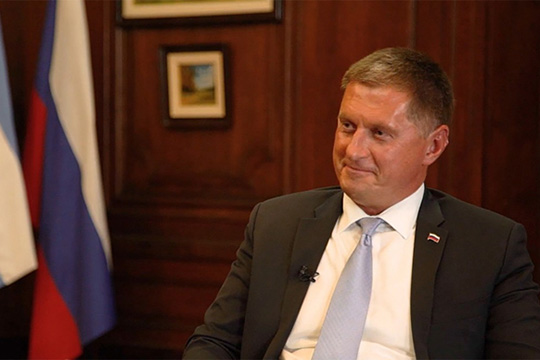 Just as Europe and Russia are systematically lifting restrictive measures, the focus of the COVID-19 pandemic has shifted to the Western Hemisphere where the situation in many countries of the region remains very serious.

In an interview with International Affairs, Russia’s ambassador to Argentina, Dmitry Feoktistov spoke about the way the Russian Federation is now building relations with the Latin American country, which has enacted the most stringent quarantine measures.

International Affairs: Dmitry Valeriyevich, this year the whole world is faced with the COVID-19 pandemic, which has fundamentally changed the life and work of almost every nation on earth. How are contacts developing between Russia and Argentina under the present circumstances? Have You managed to maintain them in a “business as usual” mode, or maybe even bring them up a step or two?

Dmitry Feoktistov: For objective reasons, we haven’t had any personal contacts between us for several months now. However, our countries still have an intensive dialogue going on very actively on a number of priority issues, including the ways of resolving the crisis in Venezuela, on disarmament and a bunch of other aspects of the extensive bilateral cooperation program that we have. There are also many topics that have been “put on ice” due to the pandemic, such as official invitations for top Argentinean officials to visit our country, multiple foreign ministry-level consultations, planned meetings by two intergovernmental commissions on trade, economic, scientific, technical, military and military-technical cooperation. We are waiting for the end of the restrictions to be able to restore our cooperation in full and we believe that at the end of the day we will be able to make all these things happen.

Because international meetings have been moved online and many of them have been canceled, at the current stage in our dialogue with Argentina, we are focusing on just two topics - coronavirus and helping the Russian and Argentinean tourists stranded abroad.

Meanwhile, our dialogue on political and security issues continues from working-level contacts by our embassy staff all the way to the level of the heads of departments of our foreign ministries. At my level, we are in contact with the First Deputy Foreign Minister of Argentina, Pablo Tettamanti. We have also organized a series of telephone conferences between Mr. Tettamanti and the head of the Russian Foreign Ministry’s department of Latin America Alexander Schetinin, who also is the Russian Foreign Minister’s point man on developing relations with Latin America and the Caribbean.

Where there is a need to discuss hot-button issues, our contacts continue and will expand.

This is an issue that Russia and Argentina look almost eye to eye on, namely on the need to respect the sovereignty and territorial integrity of Venezuela, categorical rejection of any military scenarios and recognition of the need to seek a settlement in the Bolivarian Republic only by the Venezuelans themselves without any outside interference. Contacts on the Venezuelan crisis between our countries have never stopped and keep going on.

We believe that Venezuela needs humanitarian assistance, which should be provided without any political preconditions and on a humanitarian basis alone. The United Nations Organization could play a big role here, including in coordinating international efforts in this area.

The provision of humanitarian assistance is being seriously hindered by the unilateral sanctions imposed on Venezuela by the United States and some  of its allies, as well as by attempts to organize a naval blockade of the country under the pretext of conducting an anti-narcotics operation. Notably, the ships that are deployed in the area are not small, high-speed ones, normally used in such operations, but real warships. Besides, significant Venezuelan assets remain frozen in foreign banks, which refuse to unblock them.

We believe that the conflicting sides in Venezuela could unite in the fight against coronavirus. As for us, we are ready to act as mediators, if asked to.

In April, the 10th Review Conference of the Parties to the Treaty on the Non-Proliferation of Nuclear Weapons, slated to be held in New York was postponed, at least until January 2021, but whether it will be held at all no one knows. Our close contacts with the Argentineans on this issue have to do with the fact that the conference was to be led by our good friend, Argentina’s former First Deputy Foreign Minister, ambassador to Austria and a representative to international organizations in Vienna, Gustavo Zlauvinen. He planned to visit Moscow for detailed negotiations to be held as part of a discussion of issues with the nuclear five ahead of the conference. Unable to come over due to the pandemic, last week he had a telephone linkup with Russia’s Deputy Foreign Minister Sergey Ryabkov, who oversees the disarmament issue.

All this shows that where there is a need to discuss critical issues, our contacts continue and will grow.

International Affairs: What is Your take on Buenos Aires’ efforts to tackle the consequences of the new coronavirus pandemic?

Dmitry Feoktistov: I believe that Argentina very actively joined in the fight against COVID-19 and at a very early stage too. The first case was registered at the end of February, and just 10 days later restrictive measures were introduced and expanded. Argentina is a country of migrants, mainly from Europe. This is probably why Buenos Aires primarily emulated the European tactic of combating coronavirus, namely the very restrictive measures already used by France and Spain. Whatever the tactics and strategies used by the Argentinean leadership, President Alberto Fernandez has repeatedly emphasized that his top priority is to save lives: “Let there be another 10 percent drop in the economy, but the main thing is to prevent 100,000 deaths.” This is the principled approach that he continues to stick to today.

While Europe and Russia are gradually lifting their quarantine restrictions, Argentina continues to maintain strict quarantine, especially since the first attempts to ease it led to a spike in the number of infections and the closure of 25,000 stores and outlets just a week after they had reopened.

Argentinean President: Let the economy drop, but the main thing is to prevent a rise in the number of deaths.

International Affairs: Are there any examples of Russia and Argentina exchanging their experience of dealing with the consequences of the COVID-19 pandemic?

Dmitry Feoktistov: Interaction between Russia and Argentina in the fight against coronavirus is primarily going on within the framework of the G20. Although unable to hold face-to-face meetings, the G20 has still held a number of video conferences, both between state leaders and Cabinet ministers, including health ministers. During these conferences, the participants were able to trade notes and outline their approaches to the problem. We are impressed by Argentina’s initiative to set up a global humanitarian emergency fund to fight coronavirus, which would take into account the special needs of the Third World countries hardest hit by the pandemic. Russia and Argentina are in favor of stepping up non-politicized international cooperation in the fight against COVID-19, of a joint development of a vaccine against coronavirus and of ensuring all countries full, non-discriminatory access to such a vaccine as soon it appears.

Our interaction within the G20 is a good example of the cooperation you asked about.

International Affairs: Is Russia’s and Argentina’s approach shared by their G20 colleagues?

Dmitry Feoktistov: These ideas are being discussed; there are many different viewpoints being presented, so it is often difficult to say who is telling the truth and who is just spreading fakes. It seems to me that the coronavirus pandemic should once again show the lack of an alternative and the importance of resolving all issues on a multilateral basis. Global problems can only be solved together.

The coronavirus pandemic should once again show the lack of an alternative and the importance of resolving all issues on a multilateral basis.

International Affairs: Have there been any particular issues that the Russian embassy has had to deal with under the existing circumstances?

Dmitry Feoktistov: Respect for the laws of the host country is the main principle guiding the embassy’s work. Therefore, our staff fully complies with the sanitary and epidemiological standards established by the Argentinean authorities, even though foreign diplomats, as well as some other foreign representatives are formally exempt from such restrictions. All Russian diplomats continue to go to work every day and each one has been issued a personal pass. This applies to the workplace though, and in everyday life we, like all Argentineans, observe restrictions and wear face masks. And even at work, we maintain social distancing, we do not hold large meetings, and communicate only one-on-one or by phone. The epidemic has certainly had its impact on the way we work. We have cancelled all vacations for our employees, but even if we hadn’t, we would still be unable to fly out of here, since all commercial flights were suspended. The meetings our ambassadors and permanent representatives traditionally have with the President of Russia once every two years have been postponed indefinitely.

No foreign policy events are taking place in Argentina there days, embassies avoid them, national days are not celebrated, most of the Argentinean foreign ministry personnel, even their department heads, are working from home.

International Affairs: In conclusion, what else would You like to say?

Dmitry Feoktistov: We need to look to the future with optimism, we should not despair. Despondency keeps you down, makes you lose heart. This is a feeling you just can’t live with. And no matter how hard it is, especially for those whose loved ones and friends are sick, they should not give up. I too have such friends both at work and in my personal life. I see this as a big challenge that must be overcome. We must believe in all that is good, no matter how banal this may sound.