EAEU at 5: a long way to full integration? 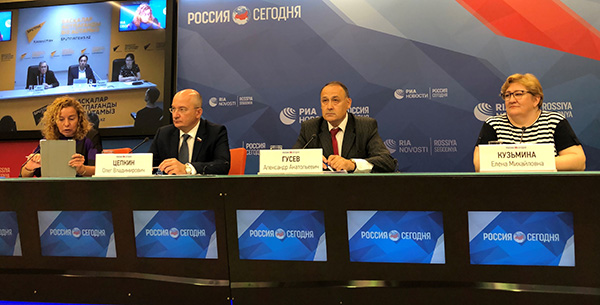 The year 2019 will the mark the five-year anniversary of the Treaty on the Eurasian Economic Union (EAEU) and 25 years since the idea of Eurasian integration was first pitched in 1994 by Kazakh President Nursultan Nazarbayev. On May 29, Kazakhstan’s current President Kassym-Zhomat Tokayev was meeting in the capital Nur-Sultan with his Russian counterpart Vladimir Putin on the fringes of an anniversary meeting of the Supreme Eurasian Economic Council.

Notably, the Commission on Cooperation between the upper house of the Russian parliament, the Federation Council, and the Kazakh Senate, has been working for more than seven years now.

“[The Commission] handles issues of cross-border cooperation, issues that can be effectively addressed by our MPs,” Oleg Tsepkin, a member of the Federation Council’s Committee on Constitutional Legislation and State Building, and of the Commission on Cooperation between the Federation Council and the Kazakh Senate, said during a Moscow – Nur-Sultan television linkup discussing “EAEU interaction and Russian-Kazakh relations.”

According to Oleg Tsepkin, during a May 24 Commission meeting in Almaty, Kazakhstan, Russian and Kazakh senators discussed measures of digitalizing oversight and supervisory  activities, exchanged views and expertise, and reviewed the youth policy of Kazakhstan and Russia.

“There are many things being done in Kazakhstan that we could emulate, including digitalization of official oversight and supervision work,” Oleg Tsepkin noted.

When describing the situation current existing within the EAEU, Murat Laumulin, chief researcher at the Kazakhstan Institute for Strategic Studies, pointed to numerous hurdles hampering trade between member-countries, above all in border areas. He added that, as evident from the EU experience, the main problems still lie ahead, especially when it comes to the issue of a single currency. He emphasized, however, that within the EAEU economic issues prevail over politics.

“This is something all members of this integration association fully agree on,” Laumulin noted.

Echoing the expert’s opinion, Alexander Gusev, director of the Institute of Strategic Planning and Forecasting, and senior researcher at the Russian Academy of Sciences’ Institute of Sociology, said that the EAEU’s focus now is more on regulatory and economic issues, rather than political ones.

“The political component will obviously prevail in the future, since the EAEU was created with an eye to the future and the full integration of the post-Soviet states. Full-scale integration is still way off though,” Alexander Gusev emphasized. He believes that the Union is absolutely capable of  solving the problems it is facing today, despite what is going in the post-Soviet countries and tensions with the West, especially the sanctions pressure on Russia and Belarus. Alexander Gusev also said that at their upcoming summit, the EAEU leaders are going to sign a number of agreements with non-member states.

“Some of these agreements will be discussed and are most likely to be inked as part of the Union developing ties with China, the United States and the EU member-states,” Alexander Gusev noted.

Zhumabek Sarabekov, an expert with the Institute of World Economy and Politics under the Foundation of the First President of the Republic of Kazakhstan, believes that as the phase of the rapid integration of the post-Soviet countries is almost over now, there is a growing need for improving the quality of integration institutions, which calls for complex and compromise solutions. Still, all EAEU members have a vested, strategic interest in promoting the process of Eurasian integration.

Zhumabek Sarabekov underscored the need for intensifying work to facilitate the member-countries’ access to the common market.

“The EAEU countries tend to better protect their domestic markets, with each member widely applying non-tariff restrictions,” the expert emphasized. According to EEC statistics, at the end of March 2019, there were 71 hurdles existing in the EAEU single market, 11 up from just two years ago. All this meaning that each country is trying to protect its producers and its domestic market. According to Zhumabek Sarabekov, Russia is high on the list of EAEU countries with the greatest number of barriers erected on the way of mutual trade.

The expert singled out industrial cooperation as another thing that deserves serious attention.

“One of the objectives pursued by the EAEU is the creation of common production chains, which will eventually help unlock the industrial potential of each member of the Union. However, the rate of cooperation in the real sector remains pretty slow,” Zhumabek Sarabekov added.

The situation is exacerbated by bilateral contradictions between EAEU members, including Russia and Belarus, which often dominate the EAEU agenda.

Zhumabek Sarabekov underscored the need for a further expansion of the EAEU, both institutional (creation of common markets, a single currency) and geographic. However, this process should not be rushed.

“As we have seen, the inclusion of still unprepared new members into the EAEU has led to numerous problems. We should have in mind just how the new entrants are economically ready for this,” he added.

According to Yelena Kuzmina, who heads the sector of Belarus, Moldova and Ukraine at the Center for Post-Soviet Studies of the Yevgeny Primakov National Research Institute of World Economy and International Relations of the Russian Academy of Sciences, with the primary effect of the countries’ entry into the EAEU almost exhausted now, the situation calls for greater integration within the Union.

“The EAEU provides great opportunities for its member-countries in economic production, trade, and, to a degree, in transit, which significantly contribute to their economic potential. What worries Russia the most, however, is the variety of administrative, non-tariff restrictions,” Yelena Kuzmina noted.

When discussing the priority areas of cooperation within the EAEU, experts mention the digitization of the economy, the reduction of trade barriers, raising the quality of trade relations, the labeling of goods, as well as introducing changes to the EAEU Treaty and the customs code agreement. Energy regulation, above all in the area of nuclear power generation, is a big priority for the Union. According to Alexander Gusev, Russia has offered to build a nuclear power plant in Kazakhstan, which by 2030 will start experiencing serious shortages of energy. He added that Kazakhstan is one of the world’s three leading producers and processors of uranium with an annual production of 24,000 tons. There are six joint Russian-Kazakh uranium extraction and enrichment companies currently operating on the territory of this former Soviet republic.

“The volume of enriched uranium [Russia] is getting from Kazakhstan is large enough to keep our nuclear reactors running,” Alexander Gusev concluded.