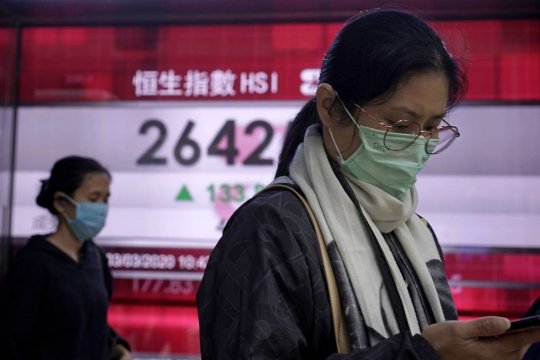 As the coronavirus pandemic advances worldwide coming to the fore is the ability of economies to hold out against an increasingly likely global recession.

Throughout the past year, a number of economists predicted a deterioration in international and country situation in 2020. However, at that moment, the researchers cited “classical” macroeconomic reasons for such a recession - the trade war, the slowdown in leading economies, the growing “bubbles” in stock markets, factors of cyclic nature. As for more radical forecasts, even their authors categorized them as “shocking” or “unbelievable.” No one could contemplate a global epidemic, capable of literally “putting on quarantine” billions of people.

“The fight against the pandemic came as a shock of a scope, if not the Great Depression of the 1930s, then at least the Great Recession of 2008–2009,” - says Oleg Shibanov, professor at the Russian Economic School, in Vedomosti. In the face of the coronavirus, there emerged a watershed between countries that have demonstrated the ability to quickly and effectively respond to the epidemic - “this is South Korea, Taiwan, Singapore, Hong Kong”, along with one-party China, which mobilized a well-trained military and civilian state apparatus to fight against coronavirus, “and those Western countries that turned out to be unprepared, ” - says Pierre Lelouch, former French Secretary of State for European Affairs, in an interview with Le Figaro.

From the structural point of view, the closure of dozens of businesses and even the entire sectors of the economy in most countries of the world, combined with the fall of stock markets “during February and March” has caused a drop in demand in most countries of the world. Quarantine inevitably limits consumer access to the service sector, which is fraught with disaster for small and medium-sized businesses, which, for example, in South Korea, make up more than half of national economy. Also, it is completely unclear as to how the transportation industry, tourism industry, public catering can recover after the crisis. In addition, a major problem to be tackled with is the absence, for understandable reasons, of reliable epidemiological models that would allow governments to predict with high precision the development of a pandemic and its economic consequences.

For example, experts have information on the economic indicators of US metropolitan areas during the Spanish Flu pandemic in 1918-19. They show that the more drastic measures the authorities used to combat the epidemic, the higher their economic performance was after it ended. However, The Economist says, the age-related characteristics of coronavirus mortality are very different from the Spanish flu. Unlike then, when it was about an industrial economy, today it’s mainly about the economy of services. Therefore, the outcome may be different.

Economists have traditionally used the concept of “growth model” to describe the key characteristics of the economic systems of individual countries. They also use this model to predict the policies of the authorities in the context of economic crises. However, at present most leading economies or economic associations are characterized by a mixed model which requires the adoption of measures that contradict each other. And therein lies a huge problem.

Thus, the EU faced the pandemic in a situation where the chances for meeting the criteria for EU membership in case of an unfavorable turn of events in the global economic environment were very limited for most countries in the eurozone. The slowdown in European economies during the 2000s - 2010s led to an increase in budget deficits in many countries. The current crisis hit Europe, first of all, countries that are already burdened with high debt. For example, Italy’s public debt could reach 160 percent of GDP by the end of this year - which “could provoke panic in the state bond market.” As a result, one of the first “victims” of coronavirus was the EU Stability Pact.

The current crisis is different for Europe compared to the previous ones also because the pandemic is “unpredictable” and because “Europeanism” was weakened by other crises of the last decade. ”[i] The situation in the eurozone is“ much worse than in 2009 ”, because forecasters underestimate the “implosion of economic processes." “The recession promises to be longer and deeper” [ii]. According to the ECB, the EU may require a package of fiscal measures of up to 1.5 trillion euro until the end of the year. Like during the euro crisis, Europe has split. Paris, Rome and Madrid, supported by a growing number of other countries, are demanding common “corona bonds” to share the burden of fighting the epidemic and its economic consequences. This is because countries that rely on consumption for growth combat the negative consequences of the epidemic, first of all, by supporting incomes at the highest possible level.

On the other hand, where export is the main driver of the economy, it is first necessary to support the sustainability of the current balance sheets of enterprises and keep jobs. That’s why Germany, which, they predict, will see a 10 percent economic decline in the first quarter [iii], and Austria and the Netherlands, for the evening of April 8, strongly oppose the "uncontrolled printing of money." Finally, it is not clear what long-term effect for the common market will come from the restoration of border controls and entry bans. "No less than the existence of the EU could be put at stake" [iv],experts say.

The US growth model is highly questionable as well. While it leans on a fairly large service sector, significant exports, the main driver of the economy is consumer spending. According to critics, the American economy cannot survive a long period of national quarantine without catastrophic consequences. A total halt in economic activity will destroy the social fabric of society and bring the existing growth model down to its knees. However, a "reset" of the economy, which the Trump administration continues to dream about, "will turn the pandemic into a plague."

Unlike the 2008 crisis, all the emergency measures taken by the FRS in recent weeks have not stabilized the markets. The more than two-trillion aid package, formally approved by the Congress, leaves the most burning question unanswered: who should be the recipients of this support, businesses or citizens? Usually, Washington chooses businesses [v]. But in this case, the authorities face a dramatic upsurge in unemployment, which has not been observed for the past 60 years [vi]. Meanwhile, it is the employment factor that can become key in determining the winner in the upcoming presidential election. For the incumbent administration, Henry Kissinger points out, “public trust in American ability to manage the situation at home” is at stake.

A dual situation is observed in China. On the one hand, Beijing, according to official figures, has managed to at least put the epidemic under control. In economic terms, China is “in a strong position”, possessing the world's largest reserves, significant liquid assets, and industrial capacities that can not only quickly compensate for the losses of recent months but give a new powerful impetus to Beijing's greater economic presence throughout the world. At the same time, China is confronted with “the weakened and over-credited United States and Europe, which are threatened by a widespread financial crisis that will follow the collapse of their economies” [vii].

On the other hand, the Chinese economy is heavily dependent on exports to other countries, which have declined sharply in recent months, and on imports, which suffer as well following closures of production facilities and ports around the world. In addition, China has reported an incessant slowdown over the past few years. The high debt of businesses and problems in the banking sector have worsened amid the “corona crisis”. In terms of global markets, China poses a threat to the US debt market if circumstances force Beijing to sell off dollar reserves. Finally, the slowdown, not to mention the decline of the Chinese economy, will play a major role in lowering commodity prices, since China holds the world’s second position in annual imports.

Lower-priced commodities can destabilize the economies of dozens of developing countries that depend on their exports. On March 30, UNCTAD published a report stating that “for developing countries, the consequences of the pandemic ... proved worse than what they had to go through in 2008.” Devaluation hit particularly hard on Brazil, Mexico, Indonesia and South Africa. According to UNCTAD experts, the shortage of funds for developing countries to fulfill their financial obligations in 2020 and 2021 will amount to up to 2 trillion. dollars. “This could lead to a debt crisis in which many direct and indirect lenders in industrially developed countries will be dragged into.”[viii] Finally, in many developing countries, most people have no savings and governments do not have enough funds to support those who have lost their jobs. Even a relatively short nationwide quarantine can send the economies of such countries into decline. According to media reports, by April 6, "at least 85 states had turned to the IMF for assistance."

According to pessimists, there is a good reason to believe that the longer the quarantine lasts, the greater structural damage it will cause to any economy. The professional skills of workers, as well as their social networks, will also be affected. According to optimists, "America and Europe will put the economic crisis out with money, while incomes lost due to the epidemic will be reimbursed from the budgets and all problems will be sent into the infinitely distant future." And the economic models that demonstrated growth before the Covid-19 crisis will return to it within 2-3 years. [ix]

Finally, governments in many countries will surely resort to measures aimed at restoring or expanding national production in strategically important sectors, including the food and medical industries. Domestic market support policy is gaining popularity again. “This is in line with the strategy of Donald Trump in the USA, the strategy of Boris Johnson in the UK and Shinzo Abe in Japan. The goal is not so much as to limit international trade, but to create a sound domestic market, which will make it possible to reduce its dependence on conflicts and the blows of world trade ”[x].

In the aftermath of the pandemic, the authorities in most countries will have to spend "much more than they think." The consequences of the pandemic in the form of rising government debt and spikes in inflation will not take long to present themsevles. Markets may find themselves “replaced by governments”; and people in most countries of the world "will want to restore national prerogatives, especially regarding ... the health sector."

Any strategy adopted by the authorities in the current conditions will entail significant social and economic damage. Therefore, a search for the best model for adapting the economy to the comprehensive challenge of the pandemic will most likely be conducted by trial and error. The errors, unfortunately, will cost human lives. In the end, countries that succeed in picking a more effective model will gain a tangible advantage in economic competition in the "post-virus" world.