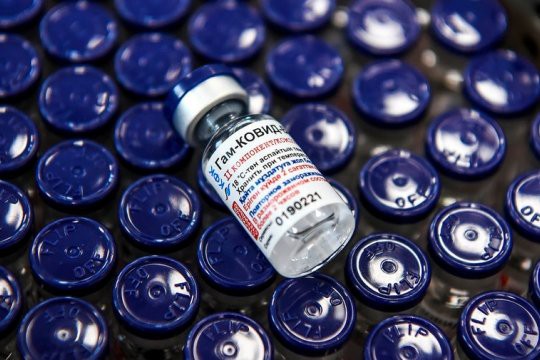 Italy may become the first European country to start a mass production of the Russian Covid-19 vaccine Sputnik V. An agreement to this effect was signed by the Russian Direct Investment  Foundation and the pharmaceutical company Adienne Pharma&Вiotech. However, without the consent of the European Medicines Agency (EMA) it will be impossible to sell the vaccine on the territory of Italy.

European Commissioner  for Internal Market Thierry Breton said a few days ago that EU countries do not need the Russian vaccine. Can this statement affect EMA’s decision on whether to issue permission for the production of Sputnik V? Why is Italy waiting for approval, rather than follow the example of Hungary, the Czech Republic and Slovakia? These and other questions were raised at TASS Conference “Sputnik V in Europe: prospects for production and use of the Russian vaccine”.

Italy’s Ambassador to Russia Pasquale Terracciano believes that cooperation between Rome and Moscow on the issue of vaccines should be beyond politics. In his words, considering that sanitary situation in many countries remains difficult, it is vital to launch a mass vaccination campaign. «Currently, if we want to win in the battle against the coronavirus pandemic, we must continue vaccination. This is the only strategy which has been recognized by all international researchers», – Mr.Terracciano said.

To this end, it is important that the world community have equal access to the vaccine, which is guaranteed in case of cooperation and exchange of information between related agencies of all countries. According to the Italian ambassador, the  establishment  of cooperation between the Gamaleya Research Institute of Epidemiology and Microbiology and the Lazzaro Spallanzani National Institute for Infectious Diseases is a brilliant  example of a dialogue and exchange of information in the  development of vaccines. «It is in the interests of all countries that the procedures of checking the vaccines for safety and effectiveness should be devoid of political considerations. They should hinge exclusively on scientific estimates, thus, cooperation between the Gamaleya Center and the Spallanzani Institute is bound to promote this view», – he said. In other words, the  ambassador pointed out  that at present, it is essential to increase the number of vaccines people can have access to, complying with all the necessary testing procedures on the part of sanitary certification organizations.

Director of the Lazzaro Spallanzani National Institute for Infectious Diseases Francesco Vaia believes that while exchanging data in vaccine development it is important to proceed through diplomatic channels and focus on science and humanity wellbeing.

Francesco Vaia spoke about forthcoming research on Sputnik V at the Rome Institute, saying that a group of scientists from the Gamaleya Center will arrive in Italy soon after the signing of a corresponding memorandum. They will bring biological material on the basis of which the Spallanzani Center will carry out research into whether the Russian vaccine could be effective against the new strains of the virus which cause so much concern in Italy and Europe as a whole. In addition, the Center will conduct a series of experiments on the  use of  double-effect vaccines, in which they will test the possibility of combining the vaccine developed by the  Spallanzani Institute with that of the Gamaleya Institute. We assume that such a combination could enhance the anti-viral effect of the vaccine», – the professor said.

Joint work with the Russian colleagues, Mr.Vaia said, will  make research effort transparent and research outcomes visible: «It is for the first time in Europe that two high-profile research centers have launched such an extensive information exchange project. Science is neutral, it should stand separate from industrial and geopolitical interests. What should take center stage is the interests of people and patients.  Undoubtedly, regulators should perform their functions as well, but in my opinion, the dialogue with ЕМА will go off well». According to the scientist, the first results of joint research by Italian and Russian experts will likely be published in April.

For March 2021, the use of the Russian Sputnik V vaccine has been approved in 55 countries, including Argentina, Venezuela, Paraguay, Turkmenistan, Hungary, Serbia, UAE, Syria and Kazakhstan.