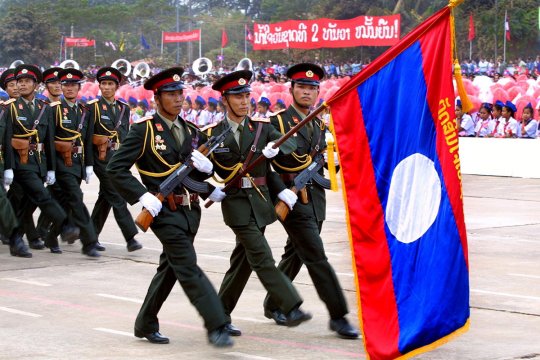 The geographical location of Laos, a small landlocked state surrounded by China, Thailand, Myanmar, Vietnam and Cambodia, has made it imperative for this country to pursue a well-balanced multi-faceted foreign policy that hinges on the development of a mobile system of economic and political counterbalances.

Regional integration is key to the economic development of Laos. A major integration mechanism is ASEAN, of which Laos has been a member since 1997. 99% of Laos’ residents believe that their country's membership in this organization yields tangible economic benefits; 92.5% say it has improved their personal financial standing.

As a member of ASEAN, Laos is committed to developing relations with China, Thailand and Vietnam but pursues a preferential policy as regards each of them.

China remains number one investor in the Laotian economy ($ 8.5 billion) with the bulk of the finances channeled into the mining, transport infrastructure and energy sectors. In 2016, trade turnover between the two countries reached $ 2 billion (1), a significant amount for Laos with its less than 7 million population. The largest Chinese-Lao project is the railway from Kunming Province (PRC) to Laotian capital, Vientiane. China is ready to inject more than $ 6 billion in the project

Meanwhile, Laos has been stepping up cooperation with Vietnam, which maintains a wait and see position in relation to China. Laos views Vietnam as a political and ideological counterweight to China. Cultural ties with Vietnam serve as an additional means of preventing the transformation of Beijing’s economic influence into the ideological one (2). Members of the ruling People’s Revolutionary Party of Laos receive training in Vietnam.

With a view to diversify foreign economic and foreign policy relations, Laos is developing contacts with France, whose colony it used to be in the past. Paris is seen as a remote neighbor of Laos, a partner in the economic and cultural spheres. Since 1991 Laos has been a member of the international organization for the cooperation of the francophone states “Francophone” (3). According to the French Embassy in Vientiane, the number of Laotians who speak French amounts to 3% and has been increasing over the past 12 years (4).

Laos is home to two branches of the Institut Francais du Laos (IFL) - an organization that promotes the French language and culture abroad; the French language is on the curriculum of three of the country's five universities. In March 2018, Laos was visited by leaders of “Francophone”, and in May 2018 – by representatives of the Francophone University Agency. The official mission of the latter is to create a new French-language communication and educational space. The visits resulted in the signing of agreements on further cooperation with both organizations.

The period that saw a catastrophic fall in the demand for the French language in Laos since the mid-1970s is coming to an end. Nevertheless, the Lao Ministry of Education has designated English as a compulsory subject in schools for the 2019 academic year. The decision was prompted by the currently prevailing position of English worldwide and Vientiane’s intention to develop economic ties not only with the Francophone, but also with the Anglosphere.

Along with the cultural influence, France is trying to build up its economic presence in Laos. In May 2018, a French delegation led by French Ambassador Claudine Ledo visited a special economic zone in the province of Savannakhet to examine the prospects for French investment. For Laos, France is the ninth largest trading partner accounting for only 0.2% of the Lao market but it holds top position among non-Asian countries in the volume of investment.

Trade turnover between Laos and France has been fluctuating in recent years between $ 34 and $73 billion. France is prepared to invest in the Lao economy but the volume of investment is determined by the extent of Vientiane’s openness to foreign investment flows and the ability of the Lao economy to ‘digest’ them.

The year 2019 will mark greater cooperation within ASEAN for Laos. Last year, economic issues within ASEAN prevailed over political ones in connection with trade conflicts between the United States, the European Union and the People's Republic of China. ASEAN countries are planning to launch the Regional Comprehensive Economic Partnership program (RCEP).

If the program is fulfilled, it will become the largest trade agreement in the world. The cumulative GDP of the countries participating in it makes up 25% of the global GDP, the population accounts for 45%, and the trade turnover amounts to 30% (5). Australia, New Zealand, Japan, South Korea may all be attracted to the program. This will provide Vientiane with more opportunities to diversify foreign economic relations amid China’s growing financial presence in Southeast Asia.

France was the first European country to sign a partnership agreement with ASEAN. Paris regards this organization as key to its policy in the Indo-Pacific region (6) and a major economic partner. The volume of French investments in the ASEAN economy in 2017 reached € 16 billion. France’s share in the ASEAN market is 1.6%. This figure has not changed for ten years.

Paris aims to give cooperation with ASEAN a new impetus, which will impart more momentum to French-Lao relations.