Indonesia, Papua New Guinea and Australia amid the rising tide of secessionism in the region 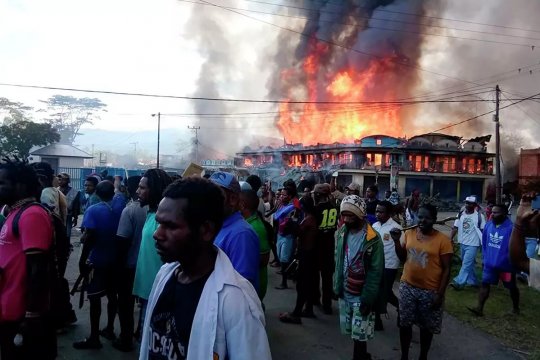 Secessionist tendencies in Indonesia’s province of West Papua have recently been attracting a great deal of attention from experts and human rights activists.

The main reason for the international criticism of the Indonesian authorities is human rights violations and the suppression of the fundamental freedoms of the indigenous people of West Papua. In 2018, the United Nations even sent to Jakarta a report on this subject filed by its Special Rapporteurs. [1] In 2019, the UN once again voiced its concern about the Indonesian authorities’ violent crackdown on the Papuans [2]. Jakarta, however, insists that security forces act strictly in line with the law.

The province of West Papua is rich in mineral resources and precious metals. Extensive mining activity, coupled with the implementation of the government’s transmigration program of relocating landless people from densely populated areas of the country to less populous ones, and the infrastructure modernization program, has socially marginalized the rural Papuan population. Roads built in the virgin forests to serve industrial projects and the influx of migrants from the overpopulated Java Island are destroying the Papuans’ way of life and changing the traditional ethnic balance. In large cities, Papuans are a minority and their numbers are declining.

The internationalization of the problem of Indonesia’s Papuan population has much to do with the geopolitical considerations of various stakeholders in view of the important strategic position of both West Papua and Indonesia as a whole.

As one of the founding members of ASEAN, Indonesia is shaping the agenda of the organization’s strategy in the Pacific, is influential in the Muslim world and is the largest market in Southeast Asia. Moreover, Indonesia factors in very heavily in the foreign policy strategy of the United States, Australia and China.

The province of West Papua borders on Papua New Guinea, which is separated from Australia by the Torres Strait, which is a mere 152 kilometers wide at its narrowest extent. Papua New Guinea and Australia both recognize Indonesia’s sovereignty over West Papua. In some cases the former even provides military assistance to Jakarta.

Papua New Guinea’s position is dictated by its reluctance to destabilize the region and, therefore, to spoil relations with the economically developed Australia (in 2018-2020, the volume of Australian humanitarian aid to and investments in PNG exceeded $1 billion) [3], alienate Indonesia, which will inevitably impact the country's economy, as well as by various problems associated with a high degree of ethnic disunity of the Papuan population, which consists of numerous tribes. Another important factor is the pro-independence sentiment in Bougainville - the main island of Papua New Guinea’s autonomous region of Bougainville. In December 2019, 97.7 percent of the local population voted for the independence of their island. Therefore, Port Moresby is just as wary of Bougainville’s separatism as Jakarta is of West Papuan separatism.

However, Papua New Guinean politicians have in recent years been talking more about West Papua than they did before. While the country is trying to come forward as a regional leader with the right to vote on a number of key issues, and is even providing assistance to refugees from West Papua, it simultaneously maintains close working contacts with Jakarta in an effort to keep this problem within the regional confines. [4]) Fully aware of the potential problems that the growing separatist sentiment in the region is fraught with, Port Moresby is generally content with the current status quo.

Australia's position on these issues reflects Canberra’s realization of the predictability of Jakarta’s actions towards West Papua and of threats to regional stability if this Indonesian province declares its independence from the rest of the country. The fact is that West Papua simply lacks the socio-political strength to ensure its sovereignty.

The problem of West Papua is negatively impacting Indonesia’s image in relations with the Melanesian states. West Papuans, just like the people of Papua New Guinea, see themselves as part of Melanesia with shared history, racial origin and way of life. For them Melanesian identity is supra-ethnic and supra-national, helping people to overcome tribal disunity and feel as part of a larger (6.5 million people living in an area of 940,000 sq. km.) ethno-cultural community with the right to vote in the international arena.

The Melanesian states’ increasingly active role in international politics has not been lost on the United States, France, Australia, New Zealand, China, and, to a certain extent, India. By internationalizing the problems of West Papua, some Melanesian leaders are trying to attract additional interest to the region from the leading powers by gaining more room for diplomatic maneuver on issues of regional security. The Melanesian governments’ position on this problem may vary, however, ranging from support for the aspirations of the people of West Papua (Vanuatu) to backing Indonesia in the hope of getting additional financial preferences from Jakarta (Fiji).

The problem of West Papua may someday be taken up by the opposition in neighboring Papua New Guinea in a bid to bring into play the international “heavyweights,” who would support the opposition in exchange for its demands for sovereignty/broad autonomy of this western Indonesian province.

As for the Melanesian countries, their positon will depend on the current political situation as the degree of their diplomatic support for or rejection of West Papua is directly proportional to the level of their relationship with Indonesia and Australia. The less amiable their relationship with Jakarta and Canberra is, the higher the likelihood of their support for secessionist aspirations in that province.

From a pragmatic standpoint, experts point out that the problem of West Papua can’t be solved any time soon, since it is too big and necessitates a radical review of both the political and economic agenda, which is something no one is now ready for. The only ones that the West Papuans’ desire for independence can possibly resonate with are those who want to change the current balance of power in the Pacific region.