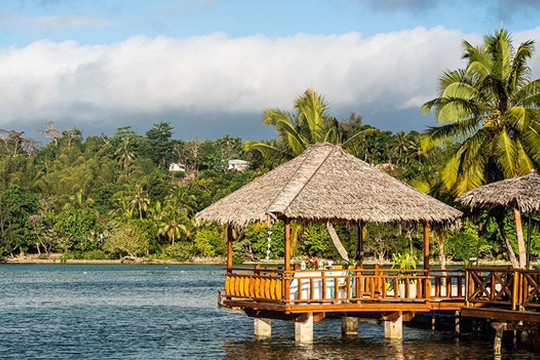 The COP 26 UN Climate Change Conference will be held from October 31 to November 12. However, it's already known that India, Australia, and the UK are planning to launch a new «Infrastructure for Resilient Island States» (IRIS) initiative.

Artyom Garin, Research Associate of the Center for Southeast Asia, Australia and Oceania of the Institute of Oriental Studies of the RAS, told us about the complex nature and geostrategic prospects of IRIS. The interview was conducted by international journalist Elizaveta Antonova.

It's anticipated that that IRIS will be aimed at building infrastructure in small island developing states (SIDS) to increase their resistance to natural disasters. Why did the choice fall on the SIDS?

Such countries, whether they are in the Indian, Pacific or Atlantic Oceans, have a number of similar features. For example, they have the same set of challenges.

For all their positive specificities, including a friendly population, extensive EEZs, a favorable climate and potentially large reserves of natural resources, they are also characterized by small land areas and exposure to natural disasters.

Undoubtedly, natural disasters have a negative impact on their welfare. An example of this is a recent study by the International Monetary Fund (IMF) on the economic consequences of natural disasters in Oceania. According to analysts, a natural disaster in the short term leads to a decrease in GDP growth by 2%, and also increases the trade deficit and government spending by 5% of GDP.

Sea level rise alone could threaten more SIDS. Since agriculture and fishing remain the main sources of food and income for their population, the consequences of natural disasters have a negative impact on yields, coastal fishing and reduce the level of food security.

In addition, SIDS' economies are highly dependent on external trade, especially on the export of raw materials, as well as imports of food and technology. High dependence on trade makes SIDS more susceptible to global crises, which are accompanied by a drop in export earnings, rising domestic prices, unemployment in key industries (often tourism) and budget deficits. The destruction of critical infrastructure due to climate change also has a negative impact on SIDS.

The establishment of IRIS was another confirmation of the thesis that climate change is the main threat to SIDS. We can say that ecology is becoming an area of cooperation in which it is possible to earn trust from the population and politicians.

Increased competition in the world has made ecology and exposure to natural disasters an area of larger actors' focus. Based on the sides of IRIS, we may assume the following areas of activities. India will focus on the Indian Ocean SIDS, as well as Fiji and probably Papua New Guinea in Melanesia. In the case of Australia, it will be mainly the South Pacific, although Canberra also has cooperation mechanisms in the Indian Ocean with India. 15 years ago, Canberra allocated about $60 million for humanitarian aid to Sri Lanka, Maldives, Seychelles, etc.

The integration of the Indian and Pacific Oceans into a single geostrategic space also contributed to the activation of the United Kingdom. Because of Brexit, London is still trying to develop its own network of new ties all over the world. The UK wants to restore its position in the Indo-Pacific, in particular with the «Pacific Uplift», under which it has already opened three new High Representative offices in Samoa, Tonga, and Vanuatu. The UK has also an overseas territory in Oceania — the Pitcairn Islands.

As the trends of climate change, humanitarian aid can take an increasingly strong position. A special role here is also played by the China factor. Beijing has already shown its powerful capabilities to promote the environmental agenda and has the resources to gain the leading positions in the world. Of course, Australia, India and the UK wouldn't want Beijing to take a leading role in this issue, especially in their «sphere of influence».

Could this coalition be compared with AUKUS?

India, Australia, and the UK are paying attention to SIDS for a reason. Given what is happening in the world, they probably started from at least two factors. Firstly, there are slightly more than 50 SIDS in the world — a quarter of the world's countries. Their numerical support can give scale to any initiative.

Secondly, the main part of SIDS has greater geostrategic importance. For example, the SIDS of the Indian Ocean is located on the trade routes from the Middle East to the Pacific Ocean. As we know, 80% of the global maritime oil trade passes through the Indian Ocean. At the same time, the South Pacific is the most attractive region for international fishing companies and the widening of global trade. In the medium and long term, more and more goods will pass through these countries, and the favorable geographical position of SIDS will contribute to their establishment as important logistics points.

However, the first actor in recent history that was able to understand the value of infrastructure for future development was China. Beijing has been implementing projects within the framework of the Belt and Road Initiative (BRI) for several years. Ports, roads, etc. contribute to a more active movement of goods on a regional and global scale.

The IRIS founding members realized this much later and are now catching up. In addition, BRI is perceived by the Quad countries and their partners as the main factor in expanding the economic and political influence of China, especially in SIDS. However, each IRIS country is ready to allocate about $ 10 million for the projects. It's a very small amount. By analogy with AUKUS, one could call them a kind of «AUKIN» or «INAUK», but this is a small-scale initiative.

SIDS would be pleased to get help. However, if IRIS is positioned as a coalition for infrastructure competition with Beijing, it will become increasingly difficult to involve SIDS in it. In the meantime, cooperation with the UN will benefit.

Which countries could also connect to IRIS? For example, from Asia?

IRIS can develop in at least two directions. Either India, Australia, and the UK will provide assistance to SIDS together, or each will act in a pre-agreed subregion without hindering each other's activities. In any case, IRIS could become a trust factor that is needed for the expansion of aid. For example, Australia may be concerned about China's infrastructure projects in South Pacific, making a fuss in the media about potential Chinese naval bases in its backyard. However, if a Canberra-friendly actor implements a similar project, there will be no such panic. It's all about trust.

There are talks about the potential support of IRIS from Japan. Tokyo provides multimillion-dollar assistance to SIDS. Over the past 10 years, it has spent more than $1.8 billion on foreign aid to the Pacific Island States.

Japan is often followed by Taiwan. And informally, since Taiwan is not a member of the UN. In the late 20th — early 21st centuries, China has faced diplomatic competition from Taiwan, as a result of which South Pacific has become one of the key regions of their rivalry. Now history repeats itself but in a different scenario. Major donors (IRIS, Quad, China, etc.) are competing for recognition as a power that will dominate the future post-pandemic world.

The US connection to IRIS will immediately inspire debates about the anti-China orientation of the initiative. However, in the medium term, we'll hear more news about cooperation between Washington and SIDS. The position of Director for Oceania & Indo-Pacific Security has already been created in the US NSC. In addition, they still need to develop a strategy for cooperation with the countries of Micronesia after 2030, when a number of agreements between the parties expired.

The competitive environment and the strengthening of China's position in the modern lead to an increase in the number of various multilateral formats. What challenges or prospects would you highlight for IRIS in the future?

Quite difficult to say. It's important to consider whether China will be included in the initiative. If not, then IRIS can complement the Supply Chain Resilience Initiative (SCRI). In April, the trade ministers of Australia, India, and Japan announced its official launch. According to official documents, the establishment of SCRI was a response to supply chain disruptions caused by the consequences of the COVID-19 pandemic. However, based on the composition of the participants, it can be assumed that SCRI is a project of alternative supply chains designed to reduce economic dependence on China. But SCRI parties still don't have a clear strategy, but there are a lot of uncertain formulations.

If the pandemic caused the release of strategic documents on the humanitarian agenda, then the same should be expected in the area of natural disasters and ecology. It is also expected that the IRIS countries will consider aid directions depending on the degree of some SIDS' geostrategic significance.

China doesn't stand still, too. It looks for common ground with SIDS. Cooperation with Beijing is a critical need for the small island states. It has a huge market, and due to BRI projects, SIDS has access to infrastructure projects and technologies. Beijing is developing not only an economic agenda but also a humanitarian and political one. It creates cooperation centers on climate change, poverty reduction, and economic development of the Pacific Island Countries, as well as cooperation strategies up to 2050. To this should be added its enormous influence in the Indian and Atlantic Oceans. In general, it will be very difficult to compete with Beijing in the humanitarian and climate agenda for now.