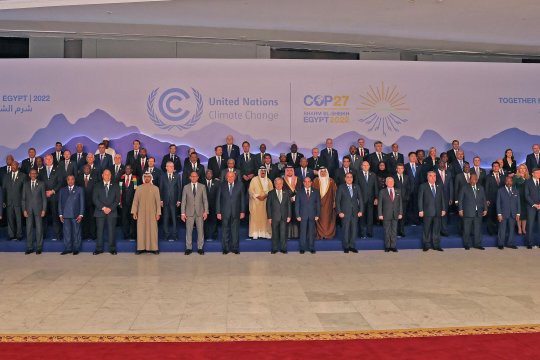 According to UN Secretary-General Antonio Guterres, the humanity has found itself “on the highway to climatic hell”. Speaking at the opening of the 27th UN Climate Change Conference, Antonio Guterres said that the world “is coming close to a turning point in climate change”.[i]

The 27th Conference of members of the UN Framework Convention on Climate Change, Conference of the Parties (COP), took place in Sharm el Sheikh. It is the fourth meeting of representatives of countries that signed the Paris Agreement, which was concluded in Paris in 2016 by an overwhelming majority of countries and which proclaims an intention on the part of the global community to exert efforts to contain the growth of average temperatures and keep them at a level lower than the one exceeding the pre-industrial level by 2 degrees Celsius. Ideally, the average global temperature should not go higher than 1.5 degrees Celsius. The main focus should be coordination of international efforts in reducing gas emissions that cause the green-house effect.

At present, the UN argues, progress in the implementation of the Paris Climate Accords is alarming. In the run-up to the meeting in Egypt, the United Nations presented a report under which “only 26 of 193 countries had fulfilled their pledges” to cut green-house gas emissions. The 26 countries mentioned do not include the United States and China, “which account for the largest quantity of CO2 emissions worldwide”. UN representatives state that the number of extreme natural calamities has been rising every year. Also, the current climate summit is taking place amid the dramatic consequences of the Ukrainian crisis for the global energy and food markets.

In his opening speech addressing the participants in the COP27 Conference, Antonio Guterres described the rate of climatic changes as “catastrophic” saying that the world as rapidly moving “towards a climatic hell”. Unfortunately, these harsh statements, which triggered a wide-ranging response across the globe, have enough grounds to base on. According to the data supplied by the UN secretary-general, «the past eight years have become the warmest in the entire history of meteorological monitoring», RBC reports. The World Meteorological Organization, which is part of the UN, reports the 2022 studies as revealing that "the average global temperature will be 1.15 degrees higher than the pre-industrial level”.

According to the WMO, the year 2021 saw a new high in the concentration of three gases that are mostly to blame for the intensification of the green-house effect. Their newly registered level has hit the highest in gas-monitoring history. Concentrations of carbon dioxide, methane and nitrogen oxide have reached levels which make up “149, 262 and 124 percent of the pre-industrial ones” correspondingly. As the levels of the World Ocean continue to rise, “at a rate that is two times faster than 30 years ago", water temperatures “have hit a record high”. Glacier melting in the Alps has been progressing at a higher speed than before: according to reports published by the Swiss monitoring service, in 2022 the Alpine ice caps "lost 6% of their total volume”, the highest indicator ever.[ii]

Natural calamities triggered by global warming are becoming an ever more frequent phenomenon. The abnormally hot weather is becoming one of the major threats to the demography, economy and even geopolitical interests of a growing number of countries. According to reports by the European Commission, the World Bank and Copernicus Service, by 2020, as compared to the early 1980s, the share of the global population that suffer from periodic heat waves had doubled. In Africa, heat posed a threat to 24 percent of the population, while in Asia and Oceania it affected nearly 20 percent. On average, this accounts for about 17 percent of the global population.

New record high summer temperatures were registered this year in North America, China, and many countries across Europe. Even though heat waves are nothing new, they have become ever more frequent in recent years, and they tend to last longer, and they spread to cover more countries and regions concurrently. The results of a recent study published by The Economist say the number of days of extremely hot weather in the Northern Hemisphere has increased sevenfold compared to the early 1980s.

The expansion of extreme temperature zones is fraught with destructive consequences. The number of agricultural areas liable to droughts has been increasing. Should the extreme temperatures cover the world’s top farming regions simultaneously, the globe will face a global food crisis as it will be impossible to compensate crop failures in drought-hit areas with excess food products from other regions.

Not long before the start of a climate summit in Europe, Swedish climate expert Johan Rockström, interviewed by Frankfurter Allgemeine Zeitung, was cited by RIA Novosti as saying that «less than in 50 years from now» a considerable number of residents of «Brazil, India, Africa and the Middle East» will have to leave their permanent places of residence. According to the scientist, the reason for this will be an increase in average yearly temperatures on the equator to 30 degrees Celsius «probably, as early as in 2070». This will put the lives of hundreds of millions of people under threat.

The global rise in temperatures is exacerbating the issue of shortages of water resources. Water is an irreplaceable resource - it cannot be replaced by any other resources. Water plays a crucial role in the physical survival of humanity and to a large extent, in the production of agricultural produce. Water plays a vital role in power generation and in the logistics of energy resources, in the first place, coal and fuel oil.

In case of a further growth in average temperatures, many regions will suffer from years-long droughts and will inevitably face acute water shortages. This will be followed by a drop in agricultural production and a decrease in power generation. Drinking water prices will soar, and so will food and energy prices. There will be problems with the supply of spare parts and materials. And social and economic instability will intensify to become more pronounced.

The issue of global warming is rapidly turning into an issue of national security. According to The Economist, given an accumulation of the negative consequences of green-house gas emissions in the past decades and considering the impossibility of dramatically reducing the emissions “hear and now”, the 1.5-degree target seems unachievable. The «realistic» approach stipulates greater investment in technological solutions, aimed at alleviating the consequences of green-house effect. Also, it signals the need for greater efforts in addressing the issue of humanity’s adaptation to the changing environment.

A number of western experts deem as «unavoidable» the revision of the growth model for developing countries given the rapidly progressing decarbonization of the economic processes. Coming from the West are ideas suggesting that there is no alternative to some countries waiving part of their national energy sovereignty in favor of trans-national entities – in exchange for investments in ensuring the faster pace of the «green transition».

Moscow proposes a balanced approach, under which the programs of humanity’s energy transition in the decades to come should be designed to reverse the negative climatic phenomena and should base on the potential of transitional economies and the developing countries. It is essential to support social and economic development, not undermine it. The rich countries should make a contribution that matches their share in the global economy and the role they played in polluting the environment in the industrial age. This proposal was backed by the UN secretary-general in Sharm el Sheikh. As he addressed the forum, Antonio Guterres called on «…the developed and developing countries to conclude a climate solidarity pact».

In the Russian Federation, the process of climate warming is occurring faster than the planet’s average. That’s why Russia remains committed to «…the implementation of its climate commitments despite the current sanctions», Ruslan Edelgeriev, the presidential representative for climate-related issues who headed the Russian delegation at COP27, told a TASS correspondent. In the words of Edelgeriev, in the absence of external pressure, «if there were no sanctions, restrictions and discriminatory approach»», Moscow was planning to complete all major measures» towards the transition to carbon neutrality by 2050. Now, the deadline has been moved to 2060. Politicization of international relations has a negative impact on the formation of common carbon emission markets, results in the refusal to mutually acknowledge «the results of climatic projects», limits the opportunities for knowledge and technology exchanges and puts restrictions on «the access to international funding».[iii]

The ongoing forum in Sharm el Sheikh is supposed to provide a comprehensive estimate of progress in fulfilling the climate commitments that the countries involved made at COP26 in Glasgow a year ago. The Conference is thus becoming a leading international forum that determines «the control parameters of «the global green transition»».

From the political viewpoint, COP Conferences are deemed as a last chance to «make a breakthrough» in addressing the negative consequences of climate change until these changes become irreversible. Undoubtedly, the geopolitical confrontation is seriously damaging international community efforts in this area. Despite the geopolitical challenge, COP 27 Conference has a chance to demonstrate that a transition to a more realistic agenda on tackling climate change is possible even considering the current alarming trends. And even regardless of them.