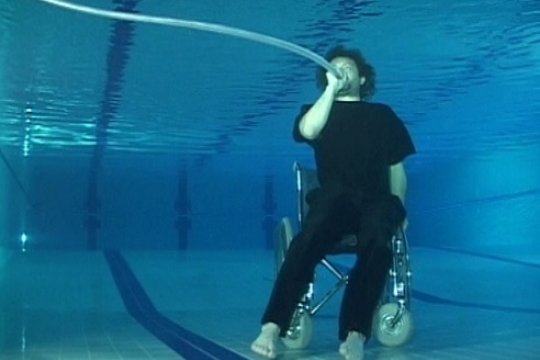 The Moscow Museum of Modern Art presents an extensive solo show of Jaan Toomik, a world-famous video artist, painter and film director, often described as Estonia's most brilliant figure on the world art scene. The exhibition at 10 Gogolevsky boulevard entitled 'My End Is My Beginning. And My Beginning Is My End' features paintings, sculpture, short films and video art created over the last 20 years. The title of the present exhibition alludes to the lines of a rondeau (Ma fin est mon commencement) by a 14th-century French poet and composer Guillaume de Machaut constructed on the reproduction of a tune — note by note — in reverse order. According to the art critic Viktor Misiano who curated the exhibition, the works were arranged not in the chronological order but based on a unique scenography, in contrast and dialogue with each other, thus revealing the way the artist’s key themes and motifs - cyclical nature of life, the interrelation of life and death - are translated into different art forms. ‘In essence, Toomik’s work attempts to challenge the Western view of the world. Using modern video technology designed to convey the authenticity of an event through the use of real time, Toomik breaks through this deceptive visual strategy to reach the eternal structures concealed behind’, Viktor Misiano wrote in one of his articles dedicated to Toomik’s art. Olga Temnikova of Temnikova & Kasela Gallery (Estonia) who has been working with the artist for years said that the show was the Museum’s initiative, but the success of the exhibition was the result of chemistry between the artist and the curator. “I was impressed how their destinies intertwine, how Viktor relates to Jaan. Viktor just before the opening told me that ‘Jaan’s destiny is somewhat also his’.” 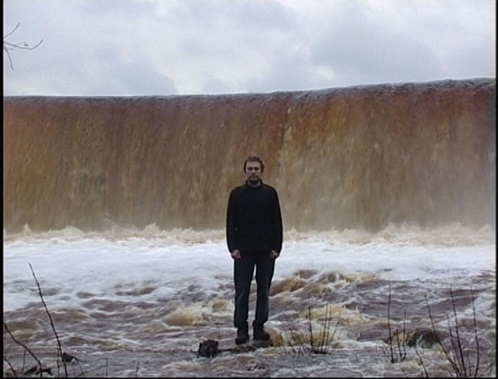 It's not the first exhibition of the prominent Estonian artist in Russia (in 2012 his personal show in Moscow was organised by Pop/off art gallery), but the current show provides the Russian viewer with a rare opportunity to trace every stage of Jaan Toomik's prolific artistic career – from his fascination with Neo-Expressionism and Post-Conceptualist installation to performance and video art – and to penetrate the issues of life and death, reality and dream that are crucial for the artist. Our observer Elena Rubinova met Jaan Toomik during his short stay in Moscow to speak about the significance of his long-time friendship and collaboration with Viktor Misiano, the importance of Russian culture for his development as an artist, and transformation of his performance language over time.

You’ve had a long list of international personal and group shows over the past 20 years – from such institutionally important venues as Georges Pompidou National Centre, MUMOK, Hamburger Bahnhof Museum to biennials in Venice and San-Paolo.  How important is this solo exhibition in Moscow for you? Is it somewhat of a link with your past?

Of course, it’s emotionally important for me to have a show in Moscow because I started my art studying through Russian culture – Moscow and St. Petersburg were the first destinations for culture, so there is some nostalgic element for me. Another reason why the current exhibition is of special value is because of a long history of friendship and working relations with Viktor Misiano. I met him in 1996 at the Manifesta 1 and since that time we have successfully worked together several times, and this show was planned a long time ago – some 5 or 6 years ago but some circumstances interfered and prevented us from doing it earlier. Viktor Misiano has a very compact and concentrated view on my creations across media and in different genres, which is hugely important for the exhibition spanning more than 20 years. 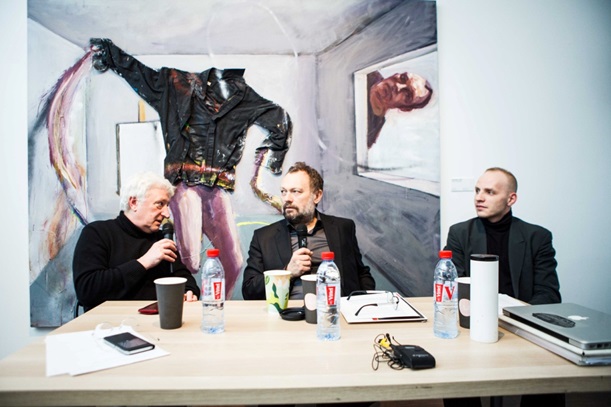 Have you selected works for this show together? Was it important for you to include some particular works so that the Russian audience has a chance to see them? Some of them are really bold, if not radical …

With this exhibition we, Viktor and I, decided to make a mental trip and take a viewer through the museum halls, so we mostly selected the works taking into account the space situation. It was Viktor’s choice to put together works in different media – video art next to paintings, installations, sculpture which are supposed to be in a dialogue with each other. It was my idea to bring this large-scale installation first shown at the Venice Biennale, a line of wooden coffins.  Here at MMOMA, it is on display in the last hall. In my view, it perfectly matches the space and works well with other exhibits. 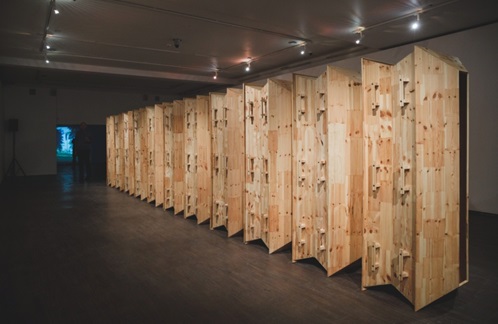 We do not see too much of that kind of art in Russia … Do you expect that some daring and bold artworks will be inspiring for young Russian artists?

I hope so. To be honest, these days you do not see too much of that kind of art anywhere, not only in Russia… Nowadays artists, I mean mainstream artists, choose to be closer to formalism or to commercial trends … But it’s difficult to talk about my own art…  Anyway, when we prepared the show we expected it to be some sort of a provocation, and I think we managed to do that, at least, to some extent. 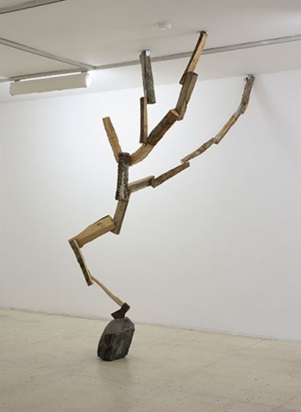 Have you done any performances that put your life at risk or could be damaging for your health?

Mental health, you mean? (laughs) …Some, but not many. I think that the most dangerous piece was the performance documented in the video, where I jump from a high altitude. It was really dangerous. (note: Untitled [To My Brother] (2002  is a documentation of a performance in which the artist falls freely from a height of 9 metres as if diving or jumping into water, but instead of water it is the earth that "swallows" him).

Did you practice your jump?

I practiced jumping into the water about 100 times and was instructed by special coaches. If I did not do any rehearsing, I could easily break my leg or neck. I did special training to get the feel of a vertical fall, to be able to hold my body as straight as a stick. When you’re up there, the hole in the ground looks like a matchbox, and you start thinking – how am I going to fit there? But, anyway, it was dangerous.

It’s a very powerful video piece, I must say.  In painting and video you often analyse yourself, being simultaneously the ob­ject and the subject. But could you say that you have reconsidered the attitude to your own body as the subject and the art medium?

I suppose, I have but it has been at many different levels, you cannot say that it’s in one way. But maybe I’m a little bit lazy because I have always had my own body as a kind of tool…It’s always in place for us as a form. But the usage of a human body was not my main means or tool. In the beginning of the 90s I did not use the body so much – I was more into meditative video installations – some of them 3 or 4 you can see at this exhibition: they were concentrated on meditation and some primordial elements like fire or water. But life went on and some existential problems, personal matters and human relationships got more important for me – and at that stage I turned to the body as a subject and a tool in art practices. 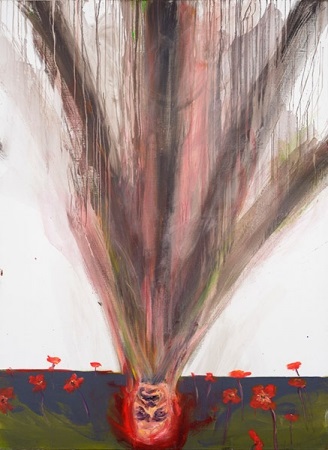 You’ve been working across media and in particular with video, but you studied painting at the Art Academy, didn’t you? Is traditional media coming back in your art practices? The MMOMA show presents some recent paintings ….

I have turned to painting more seriously these last few years, following my personal devel­opment in some way. Making a video doesn’t involve one’s entire creativity: the medium creates a certain distance from the viewers’ standpoint, or the medium creates a distance between itself and you. Being involved in painting gives a certain manual dimension and you can act in paintings very directly and fully; it over­whelms you. 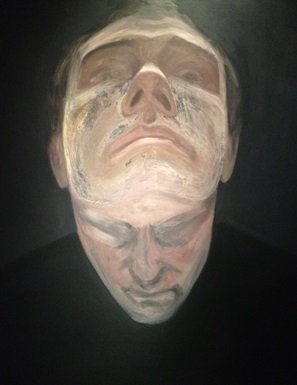 I know that you teach at the Estonian Academy of Fine Arts. What do you want your students to understand about art and the role of the artist in our time?

Just to find inside power and motivation to continue that way. It’s difficult to express but this is the main thing. If you do not believe yourself, nobody will believe you. It’s some inward energy of an artist that makes it not formal. It has changed – the young generation is more rational than my generation of artists but it’s still important. I speak to them, but who would like to listen to this message is another story.

What would you like a viewer who sees your works for the first time to carry with him?

First of all, to look without any stereotypes, try to be free.

The exhibition supported by the Cultural Endowment of Estonia and Estonian Embassy in Moscow will be open until March 24th. Artworks from collections of Art Museum of Estonia, Tartu Art Museum and private collections.