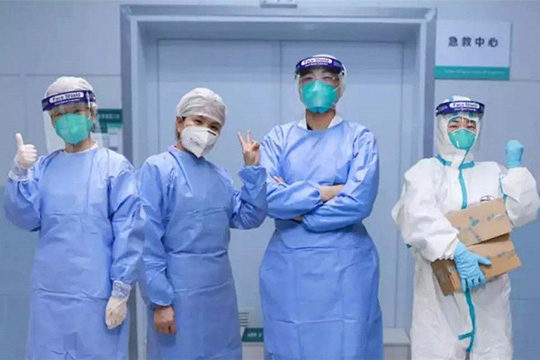 The Republic of Korea was one of the first countries that the coronavirus spread to, and for quite some time the country held the second place in the world in the number of recorded cases of COVID-19 infection.  South Korea has since slid to the 26th place, however, with the number of daily infections not exceeding 10 - a pretty impressive result for a country that has found itself in the epicenter of a pandemic. The South Korean experience in fighting the epidemic was discussed by a panel of experts meeting at the Russian International Affairs Council (RIAC).

The first case of COVID-19 infection in South Korea was registered on January 20, and a mere 30 cases had been recorded nationally by mid-February. No restrictive measures were taken, with the authorities just advising people to avoid mass gatherings. Still, on February 16, members of the Shincheonji religious group attended a massive prayer in the country’s third biggest city of Daegu. According to representatives of this church, which is considered a totalitarian sect in South Korea, 1,290 people attended the service, but investigators later determined that the actual figure was around 10,000. Moreover, it turned out that 42 members of the sect had visited China’s Wuhan in January. As a result, on February 29, the number of per day infections recorded in the south of the Korean Peninsula spiked to 900. According to the authorities, 3,526 cases of COVID-19 infection were confirmed nationally by March 1. According to Lee Sang-min, a researcher at the Hanguk University of Foreign Studies’ Institute of Russian Studies in Seoul, and a visiting researcher at the Institute of Oriental Studies of the Russian Academy of Sciences in Moscow, 60 percent (5,200) of coronavirus infections in South Korea are due to the activities of the Shincheonji church.

On April 5, South Korea’s coronavirus infection rates started to fall. In a matter of just four weeks, the Korean authorities managed to bring the number of daily cases down to 70, and presently their number does not exceed 10. Today, the overall situation in South Korea is fairly stable with 10,801 cases of COVID-19 infection, 9,217 recoveries and 252 deaths having so far been registered in the country.

According to Alexander Vorontsov, head of the Korea and Mongolia department, member of the scientific council of the Russian Academy of Sciences’ Institute of Oriental Studies, and a Russian International Affairs Council expert, one of the reasons why South Korea managed so quickly to check the spread of the virus is the country’s advanced health care system and high level of technological progress. From the very outset of the COVID-19 epidemic, South Korean specialists developed special public monitoring programs: if a person with coronavirus or someone suspected of being infected left the house, information about his movements was transmitted in real time to doctors and police and, most importantly, to his or her neighbors warning them to avoid contact with that person. Dedicated applications were also introduced allowing people to maintain round-the-clock online communication with doctors.

“The 3-T system has proved its effectiveness in combating the virus: testing, tracking (observation) and treatment. Additionally, the government established a wide-ranging system of an early diagnosis of the disease. Up until mid-March, South Korea led the world in terms of the level of testing with over 15,000 free tests performed each day,” Vorontsov emphasized.

Besides, South Korea has made good use of its experience of combating previous coronavirus epidemics, such as SARS and MERS. Alexander Vorontsov said that in 2015, the South Korean Health Ministry was given broad extrajudicial powers, uncommon for Western democracies, to collect personal data of confirmed and potential patients during periods of epidemics. During the outbreak of the Middle East Respiratory Syndrome (MERS), this proved highly effective allowing, in particular, the creation of an extensive infrastructure for monitoring the spread of the disease and the movements of those infected.

Lee Sang-min, for his part, noted that the South Korean authorities have tried not to infringe on the principles of democracy that the country has been building for more than 30 years. Therefore, they did not cancel international flights (selectively), nor did they close down restaurants, barbershops and stores.

“The South Korean government was immediately ready to quickly address the problem uncompromisingly, but openly, with due respect for the letter and spirit of the law and the citizens’ right to free movement,” the expert noted.

Lee Sang-min added that by mid-April, the situation in the country had improved to an extent that the authorities decided to hold parliamentary elections on April 15.

Alexander Vorontsov noted that “holding elections amid a pandemic is unprecedented. From the standpoint of the global situation with the epidemic, [South] Korea really took an extremely risky step: when they decided to go ahead with the elections, the country had not yet seen any decline in infection, but apparently they were looking to the future.”

He also mentioned as an interesting phenomenon public opinion changes in South Korea. When the epidemic began, South Korea, observing democratic norms, did not impose quarantine, kept open its borders with China and even provided humanitarian assistance to Beijing in the form of face masks and medical equipment. This provoked questions and even anti-government sentiment among the population, especially the opposition. President Moon Jae-in was accused of pro-Chinese sentiments and a whole campaign was launched to collect signatures for his impeachment (activists managed to collect 1.2 million signatures). Such practice is not new for South Korea, whose previous head of state, Park Geun-hye, was removed from office on charges of corruption and disclosure of classified documents.

However, when the measures taken by the government worked and people saw how competently it fulfills its obligations, the situation changed. In parliamentary elections that were held, setting a record for turnout (66%) for the first time since 1996 (and this amid a pandemic!), the pro-presidential Toburo Democratic Party garnered a hefty 60 percent of the vote.

As someone with first-hand knowledge of the events, Lee Sang-min said that maximum precautions had been taken at polling stations with everyone wearing face masks and gloves and keeping a distance. All polling places were disinfected and everyone had his or her temperature measured.

“When the government effectively performs in a crisis, then people have no choice but to support it, so we can say that the coronavirus played a big role in the political life of the country. I think the ruling party would have won anyway, but the virus ensured a record turnout and number of votes,” he emphasized.

According to Lee Sang-min, although the pandemic did not predetermine the fate of the ruling party, it considerably strengthened its position nonetheless – something that can’t be said about the country's economy.

“The economic situation in [South] Korea is the same as elsewhere in the world. In April, exports of goods dropped by 27 percent. The negative prospects for economic growth in Korea are lower than in other countries, but, according to experts, the pace of economic development will still be around 1.9 percent, which is an extremely bad showing for the country. Today, we should not strive for economic growth, the paradigm should be shifted to the safety and well-being of people,” he said. To date, the government has approved four packages of financial incentives for small and medium-sized businesses (approximately 25,000 rubles per capita).

The situation in the Democratic People's Republic of Korea

While speaking about South Korea’s successes, experts could not ignore the unique experience of North Korea. According to the latest WHO data, not a single case of infection has so far been recorded in the DPRK. The Korean Peninsula and the Korean nation have obviously demonstrated and implemented highly successful methods of combating the virus. Moreover,  they have done it completely different ways: South Korea, as a country integrated into many international processes, opted for an open and compromise path, while North Korea chose the method of total quarantine and closing of borders.

“The experience of the DPRK is absolutely one of a kind. It is the only country in the world that, finding itself in the epicenter of a pandemic, prevented the coronavirus from making its way into the county. In my opinion, the North Korean leadership managed to make the best use of its advantages. Everyone knows that the country is poor, with a low standard of living, has long been under sanctions, and that its health care system is completely undeveloped: the acute shortage of medicines and medical equipment is compounded by a lack of funding. Under such circumstances, the North Korean government realized that if the virus got in fighting it would simply be mission impossible,” Alexander Vorontsov emphasized.

As a result, while the rest of the world was just starting to look into the problem of coronavirus and its occurrence, the North Korean leaders acted with fantastic speed: on January 21, they sealed the country’s borders and imposed harsh restrictions. In addition, a strict period of medical observation of diplomatic personnel was introduced from February 1 to 15, subsequently extended to March 3 due to violation of restrictions by members of several diplomatic missions during the initial quarantine period. The restrictions required foreigners to remain inside their missions at all times and use only one food store and medical facility in Pyongyang, where they were accompanied by specially-assigned North Korean representatives in order to rule out possible stops on the way by their vehicles.

According to Alexander Vorontsov, experts are now divided in their assessments of North Korea’s anti-virus effort. Some believe that the virus will make its way into the country anyway, and that North Korea will not be able to fight it. Others argue that the North Korean authorities will still be able to prevent infection with the use of ultra-strict isolation measures, but such a lengthy quarantine period will undermine the country’s already weak economy.

“My guess is that the DPRK has experience of surviving in the most adverse economic conditions. I believe that extremely tough as the measures they are taking are, they are still justified. Preventing the virus from entering the country is an overarching task, which they have successfully coped with so far,” Alexander Vorontsov noted.