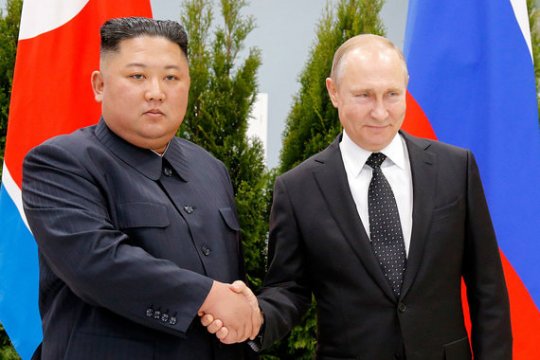 The April 25 meeting in Vladivostok between President Vladimir Putin and Kim Jong-un was their first since the North Korean leader came to power in 2011. Arriving on his armored train, Kim Jong-un said that he had always dreamed of visiting Russia and hoped that his first visit would not be the last.

“We talked about the history of our bilateral relations, about the current situation and the development of relations between our two countries,” Vladimir Putin said wrapping up the opening phase of the negotiations, which lasted for two hours - twice longer than originally planned.

Kim Jong-un said that the two leaders "had a very meaningful and constructive exchange of views tete-a-tete on all pressing issues of mutual interest." [1]

“I am grateful for the wonderful time I have spent here, and I hope that our negotiations will similarly continue in a useful and constructive way," he added.

The talks later continued in an expanded format and ran for three and a half hours. [2]

“We had a detailed discussion of all issues on our agenda: bilateral relations, matters related to sanctions, the United Nations, our relations with the United States and, of course, the central issue of the denuclearization of the Korean Peninsula, focusing on different aspects of all these problems,” Vladimir Putin said during the final press conference. [3]

The main outcome of the talks, however, was the two leaders’ repeated emphasis on the need to restart the six-party talks on the denuclearization of the Korean Peninsula, as well as Russia’s readiness to act as a de-facto mediator between Pyongyang and Washington. Representatives of Russia, North and South Koreas, China, Japan and the United States regularly met between 2003 and 2008 (under Kim Jong-il), but those meetings were eventually suspended by Pyongyang following Washington’s refusal to ease the sanctions regime and its attempts to revise existing accords.

Ahead of the Vladivostok summit, the US Special Envoy for North Korea, Stephen Biegun, made a brief visit to Moscow to discuss the terms of the new Korean settlement parley. The US State Department described the diplomat’s visit as a desire to “discuss respective bilateral engagements with North Korea and efforts to achieve the final, fully verified denuclearization of North Korea.” [4]

However, Mr. Biegun’s visit only underscored the lingering differences in the negotiating sides’ views on resolving the situation on the Korean Peninsula and regarding the mechanisms and mutual steps needed to make this happen. While North Korea, Russia and China are holding out for a phased lifting of sanctions on Pyongyang in exchange for North Korea gradually rolling back its nuclear missile program under international security guarantees, the United States insists on Pyongyang’s prior cessation of its entire nuclear missile development effort. According to Vladimir Putin, Kim Jong-un then asked him to convey his position and expectations to Washington.

“Chairman Kim Jong-un personally asked us to inform the American side about his position and the questions he has about what’s unfolding on the Korean Peninsula,” Vladimir Putin told reporters after the summit.  He promised to do this at upcoming international forums - including in China, as part of the Belt and Road Initiative.

The North Korean leader had thus decided to get back to Pyongyang’s previous practice of “balancing” between the leading world powers in an effort to achieve maximum possible concessions. This balancing act is important for Pyongyang primarily with Washington and Moscow - especially after the failure of the US-North Korean summit held in Hanoi in February.

According to Andrei Kortunov, director of the Russian International Affairs Council, “Kim Jong-un’s trip to Vladivostok means that he is looking for outside support amid his stuttering talks with the United States.” [5].

“With the failure of the Hanoi summit, Kim Jong-un needs to confirm that he is generally committed to denuclearization, but within the framework of the Russian-Chinese phased plan. Donald Trump and his team reject this and demand a complete denuclearization of the DPRK as a condition for lifting the sanctions,” Go Myung-hyun of Seoul's ASAN Institute of Policy Studies said. [6]

"What Pyongyang now needs following the failure the Vietnam summit is at least a semblance of minimal diplomatic success,” Andrei Lankov, a professor at Kookmin University in Seoul, said.

The list of countries Kim Jong-un can now turn to for diplomatic support is very short. These are essentially Russia and China. However, his visit to Beijing is not in the best interest of China, which is currently locked in tense trade negotiations with the United States.

Therefore, Kim Jong-un apparently hopes that his talks with Russia will send a signal to Washington that since political pressure on Pyongyang is not working, the Americans should proceed to a phased lifting of sanctions against North Korea in exchange for Pyongyang partially coming across on its nuclear missile program.

“North Korea's strategy always has been walking a tight-rope between the conflicts of the world powers and getting concessions that way," the BBC commented.  [7]

With the successful Russian-North Korean summit, which reaffirmed the two countries’ shared desire to breathe new vigor into the Korean settlement process, the ball is now in the US court, and President Trump’s well-known predilection for quick fixes and spectacular moves inspires hope for his next, third, meeting with Kim Jong-un.

During his recent visit to Washington, South Korean President Moon Jae-in underscored the need for a new such meeting between Trump and Kim. When meeting with Donald Trump, President Moon stressed that his “important task” is to “maintain the momentum of dialogue” toward North Korea’s denuclearization while expressing “the positive outlook, regarding the third US-North Korea summit, to the international community that this will be held in the near future.” Donald Trump responded in his peremptory manner: “I enjoy the summits, I enjoy being with the chairman,” he said, adding that his previous meetings with the North Korean leader had been “really productive.”

Although there has been no word yet about when exactly this meeting could happen, Kim Jong-un has already made it clear that he is ready "to be patient and wait for the American president by the end of the year."

Seoul, another target of Pyongyang’s political signals, factors in very importantly in the diplomatic activity currently swirling around North Korea.

“Kim launched the inter-Korean phase of the “new way” immediately after the meeting in Hanoi. It involves ratcheting up pressure on South Korea to demonstrate greater independence from the US,” The Hill commented.

“Of course, while it is awkward for South Korea to say so openly, there is no gainsaying the fact that the failure to make really meaningful progress in implementing the detailed agreements negotiated during the inter-Korean summits in Panmunjom and Pyongyang is due to the constraints imposed by South Korea’s support for the US’ North Korea policy.”

In addition to general political issues and the problem of the denuclearization of the Korean Peninsula, economic projects in energy and infrastructure, including the construction of a gas pipeline and a railway line linking the two countries are an equally important aspect of cooperation between Russia and North Korea.

All these things, however, depend very much on the overall situation on the Korean Peninsula and the prospects for the normalization of inter-Korean relations.

“I spoke about this. We have been talking about this matter for many years. This includes direct railway traffic between South Korea, North Korea and Russia, including our Trans-Siberian Mainline, opportunities for laying pipelines – we can talk about both oil and gas, as well as the possible construction of new power transmission lines. All of this is possible. Moreover, in my opinion, this also meets the interests of the Republic of Korea, I have always had this impression. But, apparently, there is a shortage of sovereignty during the adoption of final decisions, and the Republic of Korea has certain allied obligations to the United States. Therefore, everything stops at a certain moment. As I see it, if these and other similar projects were implemented, this would create essential conditions for increasing trust, which is vitally needed to resolve various problems,” President Vladimir Putin said about this particular aspect of the talks with his North Korean counterpart. [9]

Any further progress in the Korean settlement process depends directly on the kind of relationship we are going to see happening within the framework of the "six" world powers. Anyway, the summit, which has just closed up shop in Vladivostok, gives reasons for optimism.