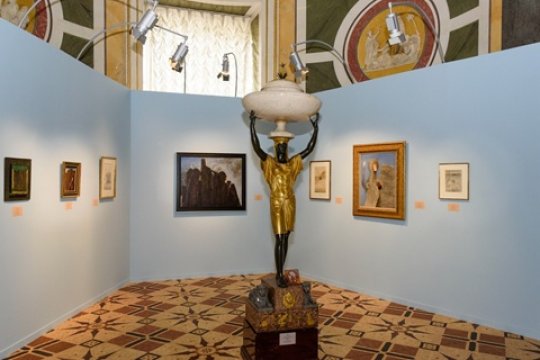 The spectacular first-ever solo show of Max Ernst's paintings in Russia opened in the Twelve-Column Hall of the New Hermitage and will be running throughout the summer granting visitors the opportunity to admire works of Ernst from his so called “first French period”. At the core of the exhibition are approximately 20 paintings and works on paper - collages, drawings, and prints - from the 1920s on, marking Ernst’s passage from avant-garde experimentation to proto-Surrealism. This period was brief - a little over a decade - but played a decisive role in Ernst’s artistic output. The early 1920s marked the transition from Dada to Surrealism not only for Ernst but European art as a whole. The show is meant to uncover this stage of Ernst’s long and prolific career and to honour his seminal contribution to 20th century art and beyond.

Many exhibits come from a private collection that has its roots in that of the noted Paris dealer Aram Mouradian who organised Ernst’s exhibitions in France and was closely connected with the artist throughout his career. After Mouradian’s death the artworks stayed in the family and were not exhibited for a long time until José Maria Jimenez-Alfaro Mouradian, the grandson of Aram Mouradian, gave a new lease on life to the collection by opening it to the public. Some works have participated in various exhibitions before, but the whole collection is demonstrated in the Hermitage for the first time, so it is the Russian and international premiere.  Other private collectors also contributed to the exhibition. 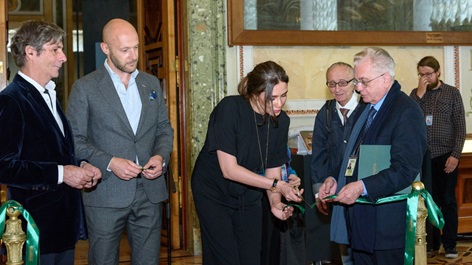 Mikhail Piotrovsky, the collectors and A. Chaladze at the opening

“This exhibition is a constellation of wonderful collections … We do not have works of Surrealists in the Russian museums, but it makes the exhibitions that we are opening today here, at the New Hermitage, and at the General Staff building even more valuable and important. It's also a clear example of our productive cooperation with private collectors and museum work with their collections…”, – Mikhail Piotrovsky, the Director of the State Hermitage said at the opening ceremony.

The show is, indeed, the first monographic exhibition of the outstanding European artist in Russia, although in the 1990s graphic works from the Lufthansa collection were previously shown at the Hermitage and Pushkin Museum of Fine Arts. Later on, three other key paintings by Ernst from the North Rhine-Westphalia art collectionwere brought to Saint Petersburg, so Mikhail Piotrovsky had all reasons to say that the Hermitage had established the relationship with the multifaceted œuvre of Max Ernst. This time the relationship grew even stronger: the exhibition traces the many sources which inspired Ernst’s enigmatic, often disturbing imagery, including Freudian psychology, Christian iconography, and appropriated imagery from popular sources. “Today we are happy to present the show of a wonderful artist, probably the most intelligent and deep Surrealist of them all, who was able to keep fresh and innovative Dadaist approach throughout his career […] One will see a number of small-size, sometimes intimate but very powerful works, in which the artist exploits his favourite motifs and themes such as birds, cages…”, Mikhail Piotrovsky added, speaking at the opening. 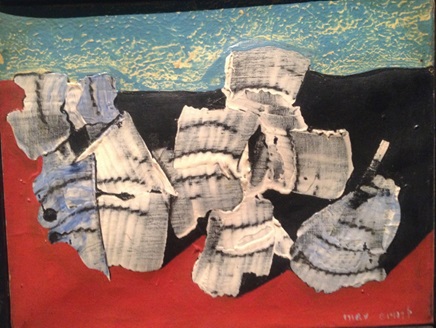 As many other international projects of the museum, the exhibition was conceived at the initiative of Geraldine Norman, the Director of the Hermitage Foundation UK, and took about two years to develop and put up. Anastasia Chaladze, junior researcher in the State Hermitage Department of Contemporary Art and the exhibition curator shared her thoughts and considerations on what she and the Hermitage 20/21 team faced while working on the project:“It was very gratifying to work on such a project, but our super task was to show not only Max Ernst, the artist, but to emphasize his extravagant and creative personality who never stopped searching and experimenting. Many called him an alchemist and not without reason. We also wanted to recreate the magic of the epoch he belonged to and the atmosphere of the days when these paintings were conceived and born”.The curator also added in our conversation that in the course of her work on the catalogue and show, she had to tap into psychoanalysis and even make some major personal discoveries. Which comes to no surprise at all: the artist was deeply engrossed in Freud’s ideas in the years of his studies at the university and continued to work on the collage technique in Paris, incorporating collage principles into painting. 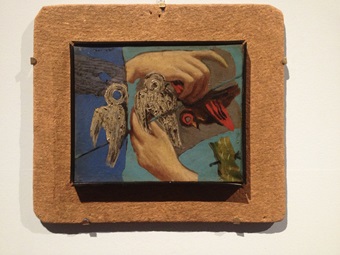 Some critics and art historians tend to believe that it was Max Ernst who came to Paris in 1922 and told his colleagues and friends, the future Surrealists, about Freud and psychoanalysis. In many ways it had a profound impact on the development of Surrealism as a style, and Ernst was called not only an alchemist, but a grey cardinal of Surrealism. The concept of automatism as a method of art-making was seen by the future Surrealists through the prism of Freud's theory of the unconscious. Max Ernst could justly be described as the greatest investigator of human consciousness, who created fantasy worlds that seem almost real. 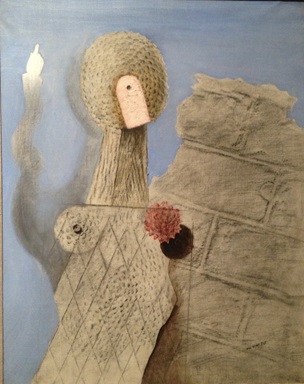 The show emphasizes the period of Ernst’s great innovations in collage and related techniques. He invented frottage and later grattage, adapting frottage to works on canvas. The artist continued his experiments with the painting technique throughout his long career, and it was his inventiveness that played a key role in Surrealist painting. Many of Ernst’s works evoke the phrase that inspired Surrealists to believe that things are “as beautiful as the chance encounter of a sewing machine and an umbrella on an operating table.” A genius of collage, Ernst was persistently searching for the method of automatic painting when images emerge from a combination of occasional lines and colours. He created fantastic images that tap into our inner world and childhood memories that feed the subconscious. His imagery during this period — animated landscapes, anthropomorphized animals and plants, and humans with animal features—became increasingly intriguing and dreamlike. 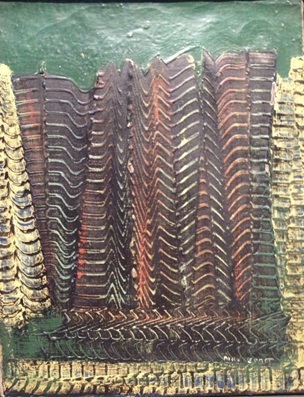 Ernst reproduced many of his experiments in graphic works and paintings, treating Surrealist painting as “a hand-made collage”. Book illustration and graphic art were no less important to him than painting and he worked in this genre till the very late years.

“The Alchemy of the Image: Max Ernst’s Books from the Collection of Mark Bashmakov”, conceived as a parallel to the show in the New Hermitage, opened on 14 June in the General Staff building. The display is no less exquisite and elegant than the main painting show. The exhibition presents around 30 publications, including early collage illustrations for the poems of Paul Éluard, “novels in collage”, sheets from the famous Natural History series of 1926, engravings and lithographs on texts by Antonin Artaud, Lewis Carroll and other authors. 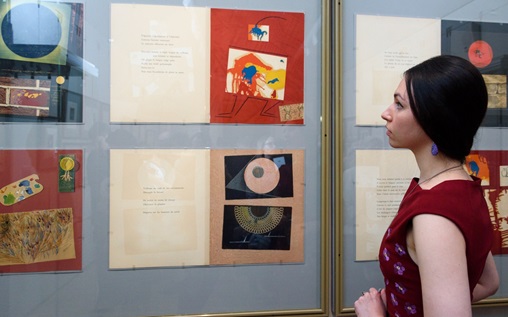 Illustrations by M. Ernst on display at the General Staff building

A prominent art collector, mathematician and Academic of the Russian Academy of Education Mark Bashmakov is a permanent partner of the museum who has been collecting livre d’artiste for decades (Bashmakov’s collection, one of the largest in Russia, numbers a way over 1 000 books and includes works by all the leading 20th-century artists). For him it is the eleventh exhibition of books in the Hermitage. When asked what aspect of Ernst attracted him most, he explained, “He is a brilliant inventor. That manifests itself particularly in the new means of artistically creating the image – in the books. The book was one of the main platforms where his ideas were realised. He is not simply an exponent of Surrealism: he is the one that created the tendency”.

Both shows are not only an attempt to show a multifaceted talent of one of the most prominent artists of the 20th century, but a logical continuation of the exhibition programme of Surrealist Year announced by the Hermitage. It started in March with Roberto Matta’s show followed by Andre Masson and now Max Ernst. Opening the exhibition, Mikhail Piotrovsky said, “Our Surrealist Year in the Hermitage is painting and a series of books. It is a unique form of our museum activity when the museum and a collector combine state and private partnership and develop a programme for such a rare thing as the livre d’artiste. We are proud of the fact that unique book collections are being used with us on a European scale.” 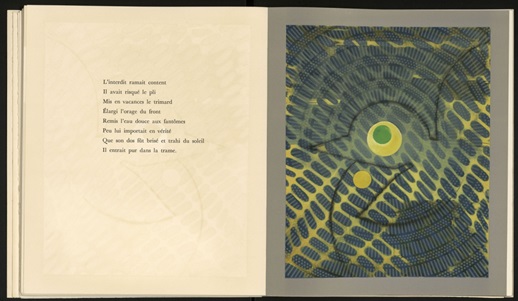 An illustrated catalogue “Max Ernst: The Paris Years” accompanies the show. Designed more like an art book, it contains insightful contributions from the leading international experts in English and Russian. The exhibition is open from 15 June to 18 August 2019.

Images: courtesy of the State Hermitage Press Department and by Elena Rubinova