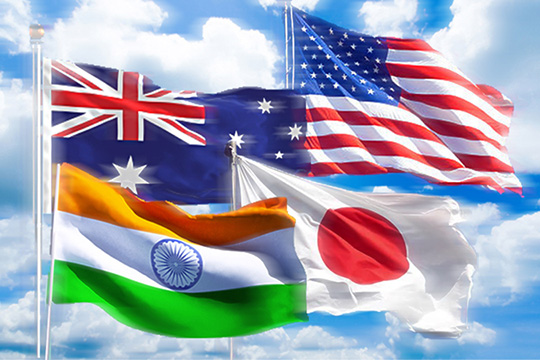 Recently a meeting of the heads of the foreign ministries of four countries - the USA, Japan, Australia and India, called "QUAD MEETING", took place in Tokyo. That is the “Meeting of the Four” or, as it began to be called, the “Quadripartite Dialogue on Security”.

At this event, initiated by the United States and personally by Secretary of State Pompeo, there was a talk about plans to create in Asia a kind of military force aimed at "containing" China.

In connection with the start of a campaign to promote this block, it is interesting to listen to analysts from the countries that took part in the Tokyo meeting, and the editors turned to the leading international observer of India Kanwal Sibal with a request for comment on this topic.

China’s phenomenal rise has given it the resources and confidence to expand its influence internationally. While it can expand on the Asian landmass relatively unhindered, it needs  maritime strength to become a truly global power. The western Pacific is China’s only access to the sea , and here it faces deployed US power. China is fast expanding its naval fleet and has reclaimed and militarised islands in South China Sea to boost its area denial capabilities. Its maritime silk road strategy is based on dual use port building in the Indian Ocean littoral, in Myanmar, Bangladesh, Sri Lanka, Maldives and, in particular, Pakistan. The two corridors, one linking China to the Arabian Sea through Pakistan and the other to the Bay of Bengal through Myanmar will give China more outlets to the sea. If it succeeds in realising its ambitions it will be for the first time in history that any power would have land and sea domination in Asia.  This is of serious concern to India. Instead of China’s rise being peaceful, it has become a source of tensions and instability in Asia.

US-China relations have dipped dramatically under the Trump presidency, with a trade war and curbs on access to US technologies etc. The Chinese origin of the Covid-19 pandemic has exacerbated anti-China sentiments in the US, making China an issue in the coming presidential election.

The Quad is a response to a mounting threat from China, even if it is not avowed diplomatically, except by the US. That it was held in Tokyo after Abe’s departure signalled a continuity in Japan’s allegiance to Quad. For India, it sent a message to China when negotiations over Chinese aggression Ladakh are being held. For Australia it provided an occasion to express resistance to China’s bullying tactics.

US, of course, is openly pushing for Quad countries to build a “true security framework”. Others do not want the pace of Quad consolidation pushed by US electoral politics. They would like to assess America’s China policy after the US election, whether there will be a search for some accommodation or continued confrontation . Japan is already a US ally, but in view of US unpredictability under Trump and the need to manage ties with China because of proximity and economic interests, it would not favour an open confrontation. Australia under Morrison has a more robust position despite divisions on China policy at home. India, with concerns about participating too fully in a seemingly US led military alliance, views the Quad as a barrier to China’s maritime threat but not on land. It understands that US, Japan and Australia have economic stakes in China that far surpass those of India, have no contiguity with China, and either no issues of sovereignty or not of the same dimension that India has with China. India may not want to take precipitate decisions that might constrict its policy choices in the future.

These underlying currents explain why Quad remains unstructured and does not issue a joint statement. Partner countries sum up their own position individually, with Pompeo excoriating the “CCP's exploitation, corruption and coercion”, Japan clarifying that the Tokyo meeting was not being held with any particular country in mind, and Australian Foreign Minister remaining discreet in public.

India prefers to place Quad in the larger context of connectivity, humanitarian assistance and disaster relief, maritime safety and security, health security and counter terrorism, and has expressed support for regular Quad meetings.

Looking ahead, a dilution of China’s global ambitions personified by president Xi is unlikely. One can therefore visualise an increasing consolidation of Quad as a barrier to China’s maritime expansion, with efforts to enlarge the group by incorporating some ASEAN countries within its fold. ASEAN is in no position to counter China on its own and will need to be persuaded to see the Quad as a supplementary security effort in ASEAN’s own interest.

India would need to persuade Russia of the rationale of Quad and try to soften its reservations about it in view of manifest China’s G2 ambitions. China has secured its Russian flank. Russia’s strategic ties with China actually facilitate those ambitions.

Special thanks to Professor of the Diplomatic Academy of the Russian Foreign Ministry, Doctor of Historical Sciences Andrei Volodin for his help in organizing this publication.