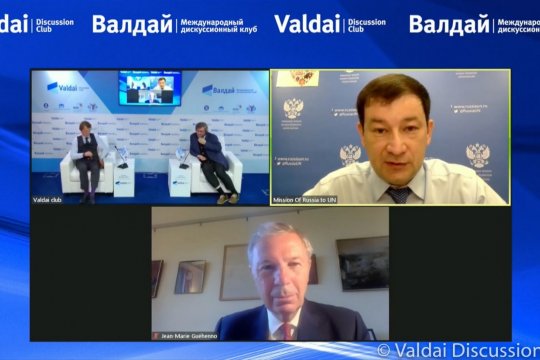 The UN marked its 75th anniversary in a rather troubled state, widely accused of failing the test of the COVID-19 pandemic and of generally been unable to fulfill its duties. What is the main task that the United Nations Organization is facing today? Does it need to be reformed and to what extent? Can we talk about an alternative to this world body? These are the main questions that experts participating in an online conference organized by the Valdai International Discussion Club tried to answer.

Dmitry Polyansky, Russia’s first deputy envoy to the UN, noted that the coronavirus pandemic has paralyzed not only the economy, but political contacts as well.

“The work within the UN has suffered greatly. An important part of diplomacy has either moved online, which is absolutely ineffective, since this format does not imply the level of trust that classical negotiations provide, or it simply does not exist at all,” Polyansky said.

Indeed, many UN-sponsored events have been either postponed or moved online. For example, a session devoted to the Allied Victory in World War II was put off to December, and the High Level Week at the UN General Assembly was held in a virtual format with the participants listening to pre-recorded video messages by the heads of state. There was neither dialogue nor reaction. The leaders were deprived of the opportunity to communicate, with their representatives speaking on their behalf.

For example, China’s Ambassador to the UN Zhang Jun, who spoke after a video message from US President Donald Trump, was forced to bat off Trump’s accusations of China in connection with the spread of the coronavirus epidemic and his call for the UN to hold Beijing accountable for "unleashing" the plague of the "China virus" onto the world. Speaking on behalf of President Xi Jinping, the representative of the Celestial Empire said that the Chinese leader rejected these accusations.

“This has never happened before in the history of the UN. It looks strange. The meeting left a rather unpleasant aftertaste,” Russia's deputy UN envoy noted.

According to Dmitry Polyansky, open sessions are PR events where each country tries to lay out its position. He said that some states often put forward deliberately unacceptable resolutions, endorsed only by Western countries, in order to force Russia and China to resort to their veto power.  “Thus, they want to put us in an uncomfortable position to show that on the one side there is progressive humanity, and an authoritarian system on the other,” he explained.

“Today the UN is imperfect, just like our world. It reflects the state of society. Let's not forget that the organization was created not to lead humanity to paradise, but to save it from hell. The only way we can realize just how much we need the UN is to abolish the organization, but I hope it won't come to that,” Polyansky observed.

UN Deputy Secretary General (2000-2008) Jean-Marie Guéhenno mentioned the major changes the UNO has gone through since its inception 75 years ago. While in 1945, the United Nations clearly outlined the concept of war as the main threat to humanity, these days, with the advent of proxies and cyberwar, this concept has lost much of its original clarity.

“In a new context, it becomes more and more important for us to be clear about the UN principles, because in today's world, where there is no clarity, war can break out suddenly,” Jean-Marie Guéhenno said.

He mentioned the atmosphere now existing in the UN as one of mistrust, where responsibilities are distributed at micro levels, which is why decision-making is delayed. Looking on the bright side, however, he mentioned the Sustainable Development Goals, adopted by the UN in 2015, and which   remain the guidelines followed by the entire world community.

In his speech, the Valdai Club’s program director Timofey Bordachev  dwelled on the topic of identifying world politics with a holiday. He said that, with the exception of the end of the Cold War, international politics has never been a cause for celebration and has always focused on issues of war and peace.

“The UN is now parting with its past expectations of harmony and universal happiness and is apparently moving towards a working relationship between participants, who know that its mission is not to bring happiness to everyone, but to conduct international policy through negotiations, law and the illusion of justice,” Bordachev explained.

He added that comparing the state of the modern world with the situation that existed before the Second World War makes no sense. Back then, many countries felt unhappy about their status in international affairs, but these days, there are no countries that are completely dissatisfied.

“We live in a new era. We have the UN and the main question is our attitude towards this institution. Do we consider it as a working instrument of interaction between states, and not some kind of a ready-made solution to all problems?” Bordachev emphasized.

Does the UN need reform?

Calls to reform the UN have been heard for quite some time now, but what this reform should look like? Speaking at the High Level Week, Indian Prime Minister Narendra Modi underscored the need to expand the number of permanent members of the Security Council. Timofey Bordachev believes, however, that this would be tantamount to abolishing the organization itself. “There are no objective grounds for constantly changing or expanding the composition of the permanent members of the Security Council. First of all, because the military potential of its present five members is way beyond that of other countries, even Great Britain is several times stronger than India. And, secondly, the law of international relations states that the leading positions are held by those who won the last war,” Bordachev noted.

He added that the inclusion of India, Japan or Germany in the Security Council would require a consensual decision by its five permanent members to give up their exclusive rights. Only then would it be possible to talk about bringing in other countries, thus turning the UN into something like the League of Nations. According to Bordachev, the UN is a unique compromise between morality and strength, where morality is represented by the General Assembly, and strength – by the Security Council. Without this compromise the UN system will be rendered unworkable.

In his turn, Dmitry Polyansky did not rule out a reform of the UN Security Council, but added that this reform should not be limited to just expanding the number of its permanent members.

In conclusion, the participants emphasized that, despite its shortcomings and weaknesses, the United Nations is of great value to the international community. Under the current conditions, there are no alternatives to the UN, and creating such alternatives appears impossible and even unnecessary.