Who will help Libyans kiss and make up? 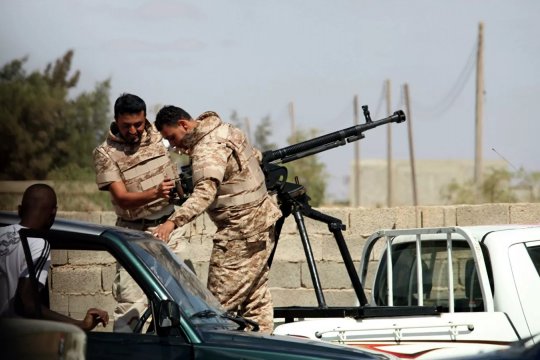 The current lull in the battle with the coronavirus epidemic that has set in in a number of flare points across the Middle East has sidestepped Libya, despite calls regularly coming from interested parties outside the country for a ceasefire and a resumption of negotiations between the Libyan National Army (LNA) led by Khalifa Haftar and the Government of National Accord (GNA) of Prime Minister Fayez Sarraj. Depending on the situation on the ground, the warring sides have either lent an ear to admonitions, agreeing to talk, or have simply refused to communicate. Right now, UN mediators are once again consulting with the conflict parties in an effort to find the common ground for national reconciliation.

Late in April, buoyed by yet another success, Khalifa Haftar said he was withdrawing from the landmark UN-brokered agreement to form a national unity government, that was signed in Skhirat, Morocco, in December 2015, and that the LNA was assuming all power in Libya - a mistake that could cost him dearly. In other words, he appointed himself the sovereign ruler of the country. The UN and most of the countries this way or another affected by the Libyan conflict, including Russia and the United States, criticized Haftar’s decision, while the government in Tripoli openly accused Haftar, and not without a reason, of an attempt to seize power.

Meanwhile, the LNA has entered a losing streak, forced to retreat from the capital that had been all but besieged by them, surrendered Tarhuna and are now fighting for Sirte, the last strategically important western city still under their control. Haftar’s representatives initially explained the pullback by their peaceful intentions, then went on to accuse “a number of countries” of walking back on an alleged promise to guarantee the start of a new round of peace talks if the LNA moved its forces 60 kilometers away from Tripoli. Instead, Haftar faced an offensive by the GNA, backed by the Turkish military and Syrian jihadists.

Sensing the inevitable tipping point in the Libyan conflict, Haftar’s ally Egypt was forced to offer a peaceful solution. On June 6, Egyptian President Abdel Fattah al-Sisi announced Cairo's plan for a ceasefire in Libya after meeting with Khalifa Haftar and the Speaker of the Libyan House of Representatives (the parliament operating in the east of the country) Aguila Saleh. The plan provided for a ceasefire, equal representation of Libya’s three historical regions of Tripolitania, Cyrenaica and Fezzan in the country’s highest authorities, the adoption of a permanent constitution, and the holding of general elections on its basis. The document also called for the withdrawal of foreign mercenaries from Libya and the disarmament of all military units, except for the LNA.

Most of the external actors, Russia included, welcomed the new initiative.

“These comprehensive proposals, approved by the leaders of the Eastern Libya camp could become a solid basis for the long overdue negotiations between the warring parties on the post-conflict settlement of Libya,” the Russian Foreign Ministry said in a statement. [i]

Ankara and Tripoli rejected the plan. The GNA later agreed to hold consultations, but only after its forces had taken control of Sirte and the al-Jufra airbase, thus strengthening Tripoli’s negotiating position.

Meanwhile, the opposite camp has also been signaling its peaceful intentions with Field Marshal Khalifa Haftar saying that he is now fighting “Turkish colonizers” and not the “terrorists," as he had previously called supporters of the GNA.

“All Turkish positions and interests in all cities are legitimate targets for our air force jets and we call on all civilians to stay away from them,” Haftar’s air force chief Saqr al-Jaroushi said.
Ankara’s response did not take long coming, with the defense minister and the presidential spokesman threatening to respond in the “toughest way” to any attack on the Turkish forces.

Of all the outside forces, Turkey has been the most active in Libya, simply because its military personnel are directly involved in the hostilities. In Turkey itself, they often call the Libyan campaign ”the Second Tripolitanian War" avenging the Ottoman Empire’s defeat in the First, as a result of which it was forced to cede to Italy the territory of modern Libya. Appeals to the past are deep-seated in Turkish political mentality. After defeating the Greek forces in 1922, Kemal Atatürk declared: “Under Dumlupynar, we avenged Troy!”

Turkish President Recep Tayyip Erdogan is now saying that there is no place for Haftar in post-war Libya, and is urging NATO to "play an important role in this matter." His top diplomat, Mevlut Cavusoglu, appeals directly to the Americans: “The presidents of Turkey and the United States have discussed the situation in Libya. Washington is making statements on Libya, but it is not on the battlefield. The United States needs to play a more active role in Libya. We have discussed this with them. We will be working on this matter at the level of our presidents, foreign ministers and defense ministers.  Steps need to be taken faster.” [ii]

By the way, Washington’s position in the Libyan conflict can hardly be described as clear-cut. Back in April 2019, the LNA’s advance on Tripoli forced the US to pull its military contingent out of the country, and virtually to get out of the way, even though the White House lauded Haftar’s “important role in the war on terror.”

The United States later ramped up its activity on the Libyan track, but for some reason focused its efforts primarily on discrediting Russia’s actions. As recently as June 10, US Secretary of State Mike Pompeo urged the belligerents to negotiate, but “without Russian interference.” [iii] Exactly what “interference” he had in mind he never clarified though. Well, Donald Trump announced his intention to send a whole “security assistance team” to Libya’s neighbor Tunisia to "counter Moscow’s activity," while simultaneously pitching a settlement plan to Ankara.

For all its warlike rhetoric, besides mulling ways to end the conflict in Libya, Turkey is traditionally trying to walk the fine line between Washington and Moscow.

“Today (08.06) Trump and I discussed the events in the region, primarily in Libya, that the US is so worried about. We confirmed that everything is going well there now and brought them up to speed on what is happening there. We may see the beginning of a new period of cooperation in Libya between Turkey and the United States. We have clinched certain agreements, but it will be necessary to discuss this with Putin,” Erdogan said. [iv]

Indeed, two days later, the Kremlin’s press service said that during a telephone linkup the Russian and Turkish leaders had acknowledged “the importance of an early ceasefire and the resumption of intra-Libyan dialogue based on the decisions of the Berlin International Conference.”

"Moscow remains convinced that the only possible settlement in Libya can be on the political and diplomatic tracks,” President Putin’s Press-Secretary Dmitry Peskov said. Moreover, Russia’s equidistance from the conflicting sides allows it to act as a diplomatic go-between.

On June 3, a GNA delegation, led by Deputy Prime Minister Ahmed Maiteeq and Foreign Minister Mohamed Taha Siala arrived in Moscow (so much for accusations that Russia is actually fighting on Haftar’s side). Five days later, Arab media broke the news about Prime Minister Sarraj’s imminent visit to Moscow following consultations in Turkey. Dmitry Peskov later told reporters that President Putin had not planned any meetings with the head of the Government of National Accord. This doesn’t mean, however, that Sarraj hasn’t flown to Moscow to meet with any other top member of the Russian leadership.

Meanwhile, while Haftar’s position is getting increasingly precarious, Speaker Aguila Saleh has been ramping up his diplomatic activity. Unlike the Field Marshal, whose legitimacy has recently been increasingly questioned (above all by NATO and the League of Arab States), the House of Representatives, presided over by Saleh, remains a legitimate state structure in the eyes of the international community. The fact is, Haftar’s naming himself the ruler of all Libya did not sit well either with the civil authorities in the west of the country, or even his supporters in the east. This was not lost on the Presidential Council controlled by Sarraj, who called on MPs to engage in a “constructive dialogue.” The media has already reported contacts that are already taking place between the government in Tripoli and the parliament in Tobruk.

What they now have is a “lose-lose situation” and the only way out is to coordinate the diplomatic efforts of those, who are capable of speaking with both conflicting sides, namely of Russia and the GNA’s sponsor Turkey. Many in the media are already talking about the possibility of applying the “Astana format” to the situation in Libya. The main sticking point, however, is the GNA’s refusal to deal with Haftar, fully shared by Turkey, since the Field Marshal is actively supported by Ankara’s regional rivals - Cairo, Abu Dhabi and Riyadh.

A meeting by the foreign and defense ministers of Russia and Turkey, slated  for June 14, has been postponed due to what Turkish Foreign Minister Mevlut Cavusoglu described as the need to continue technical negotiations with a view to achieving a lasting ceasefire. Russian-Turkish consultations will still take place sooner or later, but the search for consensus won’t be easy with the persona of Haftar being the main stumbling block because in the East, the role of the individual in politics is way more significant than it is in the West. Moreover, the Libyan conflict has already taken the form of an indirect confrontation between Turkey on the one hand, and the Arab “troika” on the other. This means that multilateral negotiations hold the key to the final reconciliation in the conflict-torn country.

Meanwhile, hypothetical ceasefire accords and the establishment of a “green line” separating the warring sides could finally put Libya on track to lasting peace and reconciliation.