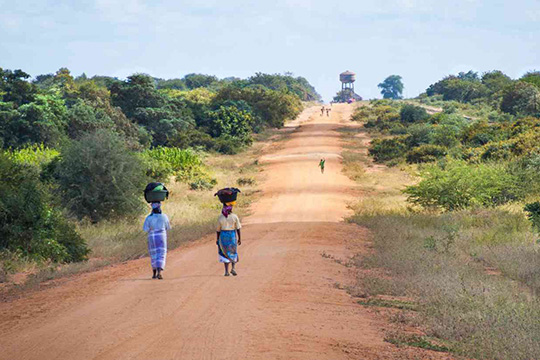 The widespread view of Africa as one huge problem point on the planet’s body characterized by pandemics, hunger, poverty and wars - the so-called “Afropessimism” - has now been replaced with an approach which was launched  by global powers as they compete for economic and political presence on the continent. After a lull, Russia has joined the race as well.

According to Russian President Vladimir Putin, “African states are steadily gaining political and economic weight, asserting themselves as major pillars of the global multi-polar system and enjoying ever more say in making decisions on the most critical issues of the regional and global agenda.” [i] Significantly, Africa accounts for about one third of the votes in the UN.

After Russia made an impressive “comeback” in the Middle East, Moscow became attractive for states seeking alternatives to the old political and economic ties. The first African country to do that was the war-torn Central African Republic, and the next to follow was Sudan, a country facing a similar challenge. Then more countries did the same. At present, more than 30 African countries have reached agreements with Russia which envisage the development of geo-resources, the supply of produce of the military-industrial complex, and the training of army personnel and law enforcement forces. Among the most significant contractors are Algeria, Egypt, Angola, Uganda and Nigeria.

The consistent and rarely publicized efforts of the Russian diplomacy resulted in the first Russia-Africa summit, which was held in Sochi on October 23-24. The day earlier, the Russian-African Economic Forum opened in Sochi too. Of the 62 African legal entities officially recognized by the UN, the Russian forum was attended by heads of state of 43 countries while another 11 participated at minister and ambassador level. Abdel Fattah al-Sisi represented both Egypt and the African Union.

During the Sochi forum, Russia and African countries signed more than 500 agreements worth about 800 billion rubles. Considering the low solvency of African partners, the participants came to agreement to set up a $ 5 billion trade support fund. The success of the forum prompted the decision to hold it regularly, every two years.

China seems to be Russia’s top economic competitor on the Black Continent. Beijing offers African countries big but easy loans and builds social infrastructure facilities on a gratuitous basis. China attaches great importance to “soft power” by promoting cultural and scientific contacts in an attempt to form loyal national elites. Every year thousands of Africans are granted scholarships to study at Chinese universities. As a result, ten years ago, China snatched from the United States its leadership as Africa’s trade and economic partner thereby becoming one of the major investors and donors to African countries.

Since the beginning of the century, the China-Africa Cooperation Forum has been held regularly, with nearly four dozen African countries joining the One Belt One Road mega-project.

And finally, (as investments have to be protected) in 2017, a Chinese military base appeared in Djibouti, the first beyond the bounds of the PRC.

Simultaneously, Africa’s growing dependence on Chinese financing may become one of Russia's competitive advantages as the continent starts to look for alternative partners.

The United States has unintentionally been contributing to this, by criticizing the policies of Moscow and Beijing in Africa. Washington has become seriously concerned with measures to repulse the "expansion" of China and Russia. In December 2018, the Trump administration presented a new strategy for Africa, or in fact, a plan to counteract the activity of Russia and China on the continent. There have been numerous official statements to this effect. "These countries are expanding their financial and political influence to Africa by applying "aggressive” practices and acting for their own benefit, which poses a threat to US national security," - the then adviser to the American president, John Bolton, said, as he unveiled the program. It turns out that the United States is acting in Africa to the detriment of its own interests?

China bore the brunt of criticism. Bolton, as usual, lashed at Beijing for many things, but above all, for using loans to enslave the Black Continent. Last summer, during the US-Africa business summit in Maputo, the United States launched the Prosperous Africa Economic Program. The Program’s ultimate goal is the same - to contain the growing influence of Russia and China by expanding trade with  countries of the continent, by promoting American technology and by boosting  assistance in the anti-terrorism campaign. According to Bolton, the new approaches will allow African countries “to remain independent in reality, not in theory”. [ii] But for the rhetoric, there is little new in the American approach.

Europe boasts traditionally strong positions on the African continent. After they gained independence, the authorities in many former French colonies’ capitals installed monuments to Charles de Gaulle. African countries are interested in cooperating with the European Union in three interrelated areas: peacekeeping, which is so critical for the Black Continent, receiving economic and humanitarian aid, and assistance in the anti-epidemic effort.

In turn, the EU is more set on measures to thwart illegal migration from the African continent, which is its top priority for now. Simultaneously, the EU is trying to be realistic about the economic and political potential of African partners. As far back as in April 2000, Cairo hosted the first EU-Africa summit, attended by heads of state and government. Seven years later, the Strategic Partnership Agreement for Trade and Democracy was signed in Lisbon, designed to boost economic and political ties and calling for “genuine cooperation” and partner equality.

Nevertheless, the number of Europeans present on the continent has been dwindling. Even the French who until recently affected the political situation in Francophone Africa have become fewer in number. According to the authoritative French weekly Le Point, Paris “is losing ground here,” and should thus “come to its senses”, as its influence and economic weight on the continent are steadily declining. [iii]

Incidentally, Ankara embarked on cooperation with the continent years ago. The first summit on Turkey’s cooperation with African countries (mainly Muslim) was held in 2008. This year the third summit took place. Since 2010, the government has been following the so-called "African Strategy." The Turkish Foreign Ministry has proudly reported on its website that the two parties have been demonstrating mutual interest in bilateral ties, which becomes clear from the following figures: while in 2009 there were only 12 Turkish representative missions on the Black Continent, today their number totals 39. And African countries have increased the number of their diplomatic missions in Ankara threefold - from 10 to 33 – over the same period.

Speaking of the prospects for cooperation between Russia and Africa, we can say first of all that Russia is one of the top ten exporters of food products to African markets. Secondly, Moscow is one of the major suppliers of military produce to the continent - the value of military contracts in 2019 is expected to exceed $ 4 billion. Thirdly, local consumers are quite satisfied with the price-quality ratio of many Russian-made products. And the contractors can pay for these goods: Africa accounts for up to one third of the developed mineral reserves, and given that surveys were not always carried out at the appropriate level and did not cover all resources-rich areas, there are more. So, the fourth area of Russia-Africa cooperation is geological prospecting work.

Addressing the Sochi forum, President Putin made it clear to African guests that Russia had no intention to repeat the mistakes of the USSR, which was determined to multiply the number of political pseudo-allies at the expense of economic feasibility. The United States and the EU have also reiterated the mutually beneficial nature of trade and economic relations. Moreover, all actors regularly write off Africa’s debts, and Moscow is no exception.

And finally, it is necessary to point out that Western countries invariably make this cooperation conditional on the “right”, from their point of view,  foreign and domestic policies of their contractors. Russia has a clear edge here as it does not seek to force its opinion on anyone, be it Europe or the African continent.