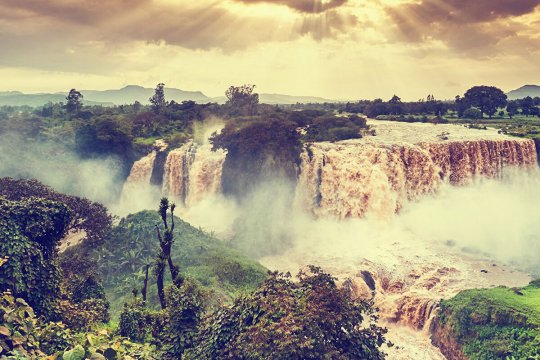 On August 6, the international news agency Rossiya Segodnya held an online roundtable "Ethiopia, Egypt, Sudan: how to share the waters of the Nile." In July, Ethiopia said that it had started to fill the reservoir of the newly-built Grand Ethiopian Renaissance Dam on the Nile River. The dam - the biggest in Africa, is often referred to as the Hidase Dam. The reservoir will take between three years (Ethiopian forecast), and 10 years, to fill up (conservative forecast). The announcement by Addis Ababa has attracted a great deal of public interest in the project.

The problem is, however, that water for the Hidase Dam reservoir will be drawn from the Blue Nile, a tributary of the Nile, which runs across Ethiopia and accounts for a hefty 90 percent of the country’s water consumption. As for the Nile, this grand waterway largely determines the economic life of the 11 countries it flows through, above all of Egypt. If the entire Blue Nile spillway is diverted to fill the Hidase reservoir, this could result in a catastrophic shallowing of the Nile with extremely dire consequences for Egypt.

This situation, namely the transition of the project to the final stage of filling the reservoir with water from the Blue Nile, has already soured relations between Egypt and Ethiopia, the two largest states in Africa with a population of 100 and 110 million respectively, and has caused serious concern on the part of the international community. Russia and the United States have been using diplomacy to resolve this problem ever since the early 2000s, but so far to no avail.

- Andrey Baklanov, assistant to the vice speaker of the Federation Council, deputy head of the Association of Russian Diplomats, Ambassador Extraordinary and Plenipotentiary of Russia;

- Stanislav Mezentsev, senior researcher at the Institute for African Studies of the Russian Academy of Sciences;

During the discussion, they expressed their understanding of the problem and singled out its various aspects.

According to Andrey Baklanov, the issue of freshwater supply is acute in many parts of the world, including the basins of the Tigris and Euphrates, Ganges and Indus, and others. However, this problem is most pressing for the Middle East, North and East Africa. The Nile is almost the only source of fresh water supply for Egypt with around 95 percent of the country’s population living along the banks of this great river.

Cairo is deeply worried by the latest developments around the Hidase Dam since it is already clear that at the end of the day there will not be enough water in the Nile for everyone. The situation calls for a negotiated solution, but talks on this issue have been tough and so far unsuccessful. The proposal for the 11 countries of the region to agree quotas for the consumption of water from the Nile was impracticable from the start.

Andrey Baklanov also mentioned the idea of setting up a consortium of the Nile Basin countries for water resources management, but apparently there is no ideal option - either with a collective approach to a solution, or with an individual one.

The expert believes that one possible way to solve the problem would be to look for alternative sources of water. With a stabilization of the situation in Libya and a restoration of its ties with Egypt, Cairo could count on that country’s underground reserves of freshwater, which are six times the amount of water in Lake Baikal.

As for Russia, it would like to see a resumption of the work by the multilateral group on the Nile.

Answering a question by the online meeting’s moderator, Vladimir Belyakov from the Institute of Oriental Studies noted that even though Ethiopia enjoys the most advantageous position in the Ethiopia-Egypt-Sudan troika, Egypt still has the abundant Aswan reservoir and if the Hidase reservoir takes 10 years to fill instead of three, as the Ethiopians expect, then Egypt will survive.

The expert emphasized that the speeded-up construction of Hidase by Ethiopia coincided with the escalation of political tensions inside Egypt, which started in 2011. He added that the slugging pace of the Nile talks reflects the weakening of Egypt's position as a regional power in Africa.

Belyakov also mentioned the construction of the Energy Center outside Alexandria, which will operate a desalination plant for Mediterranean seawater as a possible solution for Egypt.

Stanislav Mezentsev from the Institute for African Studies said that some countries might be ready to wage wars, at a new, more dangerous technological level, for resources, above all for water.

Speaking about Ethiopia, he emphasized that the country’s current economic situation is worse than in Egypt, including when it comes to freshwater available to the population, 23 percent of whom have little access to clean water. With the economy now expanding fast, water from the Hidase reservoir holds the key to its continued growth, which means that under no circumstances with Addis Ababa agree to wind down this project.

Therefore, Stanislav Mezentsev believes that it is now necessary to convince all three countries (Ethiopia, Egypt and Sudan) to use the platform of international experts and the format of international negotiations for reaching a reasonable compromise.

He also agreed with his colleagues that because there will not be enough Nile water for everyone, it is imperative to look for alternative sources, in particular, desalination facilities and underground water resources in  Libya.

Answering the question raised earlier, Mezentsev ruled out a military solution by Egypt to the Hidase Dam issue, citing a number of reasons, above all the predicted negative reaction of regional players and the international community.

In conclusion, the participants noted that “the waters of the Nile are indivisible” and should be used collectively, based on the principles of good neighborliness.